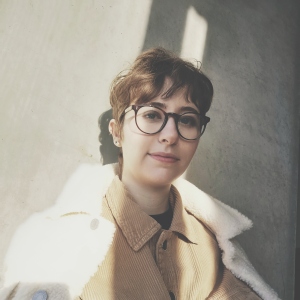 Vyvyan René is a poet and content producer. She has an MA in Poetry from UEA and her pamphlet HYDRA will be published by Marble Poetry in late 2020. She writes on ecofeminism, climate anxiety and gender embodiment in horror and other genre fiction. You can find her on Instagram as @wearenotnew.

On 13th February 2021, the poet Matthew Dickman posted on Instagram: ‘I wish the poem I wrote 14 years ago was still true.’ The poem in question is ‘Chick Corea is Alive and Well’ – an elegy for the jazz pianist, written fourteen years before his death.

In Sanatorium, Abi Palmer likens illness to a ‘lack of access’ to the world. But could we view this feeling of being ostensibly unmoored from reality as merely a different manifestation of it? Ableism is a prerequisite for the doctrine of optimum productivity and consumption endorsed by capitalist ethos, rendering healthcare essentially meritocratic. For women, BAME people, marginalised genders, queer people and anyone lacking cultural capital, who consequently struggle to be taken seriously by medical professionals (an experience that Palmer vividly evokes), performative illness becomes a grim necessity.

The creature is grinding its face against the glass door, the reptilian gape of its fangs no more than a few inches from the camera on the other side of it. Salivating, tongue fully extruded, its jaws open and close convulsively.

After perhaps thirty seconds, the creature stops what it is doing, raises its head and looks directly into the lens. Its eyes, suffused with hate, are strangely vacant. In a sudden rush of aggression it claws at the door, which audibly rattles. This lasts only moments before it drops back to all fours and resumes its frenzied drooling and chewing. The video ends with a freeze frame of that moment of eye contact: that intense, fixated stare.

Set in New London – in a society where class is enforced by genetic engineering and hypnopaedic indoctrination, the use of the euphoric drug soma is universal, public orgies are wholesome fun and ‘mother’ is a swear word – Brave New World is a novel with many themes. One of them is misogyny and the mechanisms by which it is expressed and perpetuated. Consequently, the portrayal of the novel’s central female character, Lenina Crowne, and her relationship with John the Savage (the emotional core of the story) are huge contributing factors to the success or failure of any adaptation. Wiener faces the challenge of depicting a society he describes as ‘hugely problematic’ without condoning it, which raises questions about how the problematic aspects of the novel could, or even should be, adapted.

Few novels with openly queer protagonists are as enduringly loved, or have achieved such acclaim, as Patricia Highsmith’s The Talented Mr Ripley.

Tom Ripley is a charming, Machiavellian antihero whose talents include ‘forging signatures… and impersonating practically anybody’, and whose unreciprocated worship of Dickie Greenleaf, the prodigal son of a New York shipping tycoon, leads him to kill Dickie and assume his identity. He is also asexual, yet not a single adaptation of Highsmith’s work has addressed this. With a new adaptation in the works, in the form of a Showtime drama directed by Steven Zaillan and starring Andrew Scott, it’s important to acknowledge and reflect on the ways in which this aspect of Ripley’s character has been erased.

‘I was still standing. I’m shot, I thought, I’m shot. I reached down and touched my stomach. Blood. There was a small hole, slightly charred, in my white shirt: my Paul Smith shirt, I thought, with a pang of anguish. I’d paid a week’s salary for it in San Francisco.’

A novel preoccupied with appearances and the dark realities they can conceal, it is no wonder that clothes are a recurring theme in Donna Tartt’s The Secret History. As protagonist Richard notices the gunshot in his expensive shirt at the climax, his ‘anguish’ stems less from the injury to his physical body than to the painstakingly assembled body of signifiers he has spent the novel maintaining; a ‘small hole’ through which his history, in its imperfect secrecy, is exposed.