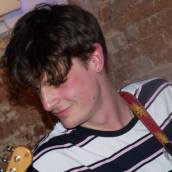 Tom McGhie is a recent graduate of English Literature from UEA and now whiles away the time as a part time barman and member of local band ‘Bag of Cans’. Pseudo-journalist, pseudo-musician, pseudo-human (…enjoys long strolls on the beach, etc).

It’s a tranquil late summer evening in Norwich city centre. A blanket of stillness coats the ancient streets and the sun’s gentle retreat takes with it memories of a pristine Sunday afternoon.

Earlier in the day, a walk through the Lanes would have been punctuated by groups of young men in a state of alcohol-induced revelry or tourists snatching photographs of the Cathedral. Now, it’s an easy stroll with a soundtrack of birdsong and distant traffic.

Three o’clock in the morning. You’re lying in a sleeping bag under a workbench in a dark room surrounded by tools and sawdust with a ragged blanket warding off the elements that pour in through the window which doesn’t properly close. The nighttime gale weaves its way into the building, embraces your exposed limbs and extremities and you shudder your brain back into the realm of sleep.

Over the last two years, “Brexit” – a word which instils both confusion and annoyance in most, has surgically torn political parties, families and friendships alike.
Ever since its first appearance on the horizon, pro-Brexit politicians have backed the concept through playing on the fears of the public and eulogising about the past days of the British Empire. “Remember when we used to be great? We don’t need Europe, we could be great again!”

There are few greater feelings than when an artist connects with their audience at a gig, something more than just applause and guitar chords. Most people have, at some point in their lives, attended a gig which has stuck in their memory because of that very exchange between performer and public. This visceral communication is what propels music as one of the most important art forms; it brings people together in an ever-dividing societal sphere.

It’s about half past six as we pull up outside the Brickmakers, the once great bastion of free music and celebrated Norwich venue. In the fading evening light, I can still make out the instantly recognisable logo of the guitar which adorns the pub’s entrance – a beacon of sorts for music lovers and punters all over East Anglia. The ‘Brickies’ is large enough to accommodate 300 people and on most Fridays and Saturdays it does so, playing host to many raucous rock gigs and performances. However, as with all local music venues, on non-gig nights the atmosphere in these places is far less febrile and only dedicated drinkers and regulars frequent the venue.