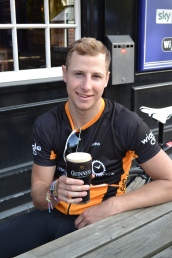 After graduating from the UEA in 2014, with a first class degree in Accountancy and Finance, Rowan has taken up roles within the community as Volunteers Coordinator for Norwich FoodCycle and Policy Executive of Norwich Green Party. He is also an avid Norwich City supporter and has held a season ticket at Carrow Road for 14 seasons.

Since my original article, Norwich’s War On Food Waste, was published a lot has changed, so I thought it was time high time for an update.

First, to recap, when the original article was published in November 2015 the seeds had been sown for the formation of an organisation with three main aims:

Weighing in at an estimated 15m tonnes per annum, the UK’s food waste mountain is an issue that is finally been given the kind of attention it warrants, thanks to the persistence of campaigning groups like Feedback and The Real Junk Food Project, who both featured on Channel Four’s series Hugh’s War on Waste – the latest in a long line of environmental food campaigns lead by TV chef Hugh Fearnley-Whittingstall.

Launched in conjunction with the series, a petition by This Is Rubbish has gained nearly a quarter of a million signatures. In an open letter to the CEO’s of the ‘Big 4’ supermarkets, it calls on retailers to collaborate with each other, as well as WRAP (Waste Resources Action Programme), to measure on-farm food waste so that it can be benchmarked by 2018 and ambitious targets can be set to reduce it by 2025.

Steel is a primary component in infrastructure, vital to the effective functioning of modern, industrialised economies. It is used to make buses, bridges and buildings, as well as train tracks and in engineering for power generation, including wind. However it is also a core element in infrastructure and products damaging to our civilisation – oil rigs, cars, and polluting coal power plants.

Those of you who know me, have read my articles or listened to me speak, will know that I am passionate about environmental sustainability within the food supply chain. I have highlighted issues of soil degradation associated with inorganic farming, as well as the vast resource usage and carbon emissions related to meat and dairy consumption, but there is one environmental issue that I have campaigned on more than any other, and that is food waste.

‘As Caroline Lucas so eloquently put it, “Climate change is not just another issue that we add to a list of policy areas, it’s the lens through which we see everything, and there is no evidence yet, that that kind of understanding is in Jeremy or indeed the rest of the Labour Party”. The election of Jeremy Corbyn as leader of the Labour Party is something that offers hope to all of us who oppose the neoliberal religion and the brutality of the current government. But even if Corbyn can help break the consensus over austerity, he is both unable and unwilling to promote true ecological sustainability, something at the core of all Green policy.’

‘Last weekend Green Party activists descended on the South coast of Bournemouth for the Party’s Autumn Conference. Many of the 2,000 plus members and supporters were in attendance for the first time, a reflection of the #GreenSurge in membership, which has more than doubled to over 60,000 since the start of the year.

Conference is the ultimate decision making body of the Green Party, through which all party policy is created. Unlike other Westminster parties, anyone can directly affect the process of policy creation, simply by becoming a member and submitting a motion — to either change or remove existing policy, or to create new policy where there are gaps. It’s this form of bottom up politics that empowers members to contribute to the areas of policy they are passionate and knowledgeable about.’

‘This summer George Osborne announced that the current system of non-repayable, means-tested maintenance grants would be scrapped and replaced by additional maintenance loans. He deemed it “basic unfairness” to ask taxpayers to fund grants for people who are likely to earn a lot more than them.’

My name is Rowan Van Tromp, I am 22 years old and have spent the past academic year working as a teaching assistant at a secondary school in Norwich, following graduation from the University of East Anglia in June 2014.

After seeing Charlton Manor Primary School on the Channel 4 programme Jamie’s Sugar Rush, I was so inspired by the work you are doing, I have decided to write you a letter to share my own experiences with you and my strong advocacy of the model you are working to.’

‘In 2013 the UN Commission on Trade and Development released a report titled “Wake Up Before It’s Too Late: Make Agriculture Truly Sustainable Now for Food Security in a Changing Climate”. It recommended a rapid and significant shift away from “conventional, monoculture-based… industrial production” of food that depends heavily on external inputs such as nitrogen fertiliser, agro chemicals, and concentrate feed. Instead, it says that the goal should be “mosaics of sustainable regenerative production systems that also considerably improve the productivity of small-scale farmers and foster rural development”.

One such system can be found at Norwich Farmshare, a cooperatively owned community supported agriculture scheme, where upwards of 100 members pay a monthly fee of between £22.50 (small) and £56.50 (large) to receive a weekly box of seasonal vegetables, grown across 5 acres of farmland just outside the city centre in Postwick. You can even get them delivered to your door for an additional £12 a month, safe in the knowledge there are no associated carbon emissions, as deliveries are made by cycle.’

‘Plans will soon be submitted by NPH (Norwich) Limited Liability Partnership (LLP) for the controversial £370m ‘Generation Park’ development, based on the 30 acre former utilities site in the Thorpe Hamlet area of the city. The proposals include 120 low carbon homes, as well as student accommodation, an education centre, a new energy research and development centre, 11 acres of parkland, new cycle routes and the promise of job creation. All this and at no cost to the council taxpayer! Well, at least not in direct monetary terms.’

I was pleasantly surprised upon hearing the news that Norwich City FC are committed to introducing the living wage — as set by The Living Wage Foundation — to all permanent colleagues across the business by the 2016/17 season, as well as reviewing wage policies of external agencies and contractors who work at the club, to make sure staff also receive the Living Wage by 2016-17. Whilst this is a great step forward in becoming a club that takes its social responsibility seriously, we’re still lagging way behind on environmental sustainability.’

(06.07.15) – The River Wensum Strategy: A Joined Up, Compartmentalised, Consulation

‘Last month Norwich City Council opened up a public consultation on the river Wensum to gather views that will be used to shape a strategy aimed at breathing new life into the river — enhancing it for the benefit of the city and its residents. The strategy forms part of a joined up approach, bringing together the four main bodies (Norwich City Council, the Broads Authority, Norfolk County Council and the Environment Agency) with statutory responsibility for the river.’

‘House music, unlike other forms of music, is arguably apolitical — given the absence of lyrics. That doesn’t mean that the scene is apolitical however, as Lithuanian DJ Ten Walls found after committing commercial suicide following his public condemnation of homosexuals over Facebook. Subsequently one of the biggest house festivals in Europe, Hideout Festival in Croatia, cancelled his set, stating: “Hideout Festival is an inclusive event, which is open and accessible to all. Our fans and customers are important to us and we do not tolerate or condone any form of hate. For this reason, Ten Walls will not be playing at Hideout Festival this year.”’

‘The past few weeks have seen waves of literature surrounding the issue of food waste by supermarkets, following the French parliament’s decision to pass legislation compelling retailers with 4,305 square feet of store space to donate any unsold, but still edible, food, to charity or for use as animal feed or farming compost. All stores which fall under this criterion are obliged to sign agreements with charities to facilitate the redistribution of such food by 2016, or could face penalties of up to €75,000.’

One thought on “Rowan Van Tromp”