I’ll admit, the title of this article is posed in a slightly tongue-in-cheek manner, but the underlying premise points to two concurring factors: the hypocrisy and northern hemisphere-bias underpinning global governance, and the distinct shift towards authoritarianism that we are currently seeing in Trump’s America; the latter possibly justifying intervention under the Responsibility to Protect doctrine. The Trump administration’s current bent towards authoritarianism is not mere hyperbole, nor the incendiary Twitter-ranting of an orange mad man, but a dark and extremely worrying leap towards the kind of repression that characterizes Assad’s Syria, or the recent kidnappings in Iraq, wherein those protesting against the regime are bundled into unmarked cars and whisked away into the night.

The Responsibility to Protect has been the subject of fierce debate over the years, with many calling for it to be implemented in contemporary Syria, Yemen and Burundi. The 2011 intervention in Libya is an example of an UN-authorized military intervention conducted in the name of the Responsibility to Protect. However, as we have seen, that has not turned out well for the Libyan people, so I would like to take this opportunity to explicitly state that this article is more a hypothetical exercise aiming to illuminate the gravity of the escalating political situation in the US (and the often fatal consequences of this situation for Black Americans), than a sincere advocacy of the Responsibility to Protect. However, the principle enshrined within the third pillar of this doctrine – the responsibility of the international community to protect when a state is manifestly failing to protect its populations – is worth remembering as we move towards the recent developments in the US. Surely what is good for Libya should be good for the US, particularly as the US is often more than happy to lead the intervening or occupying charge of a different (usually politically fragile) country in the name of justice, democracy and human rights.

Surely what is good for Libya should be good for the US, particularly as the US is often more than happy to lead the intervening or occupying charge

Since the murder of George Floyd on 25th May 2020, which ignited Black Lives Matter uprisings around the world, something both sinister and gravely alarming has been taking place in the US. Trump’s rhetoric has increasingly centred around constructing Antifa as the enemy of the people, going so far as to begin executive legislation to list them as a terrorist group, despite the fact that white supremacist groups are responsible for more murders in the U.S than any other extremist group. He has increasingly sought to portray those protesting quite literally for Black lives as divisive, nihilistic, violent and un-American. His son, Eric, speaking at Trump’s recent rally in Tulsa (which we will come back to later) called protestors “animals”. Thus, those historical seeds of dehumanization, nuisance and parasitic anti-American otherness are being sown at an institutional level by the President and his family. It would seem that Trump has learned nothing from the second World War, or the Rwandan genocide. Or perhaps he has. In a move straight out of Putin’s playbook, Trump has given white supremacists the subtle nod they were waiting for before rampaging through society, waving guns and attacking those who protest against Trump and his increasingly oligarchic government. We have seen it in multiple white men driving their cars into protestors, and perhaps more horrifyingly, we have seen it in a recent spate of lynchings of Black men in the US.

During the reconstruction era, freed slaves were lynched at the rate of one every two days in the U.S. This resulted in an estimated 2000 deaths. A further 4,400 were lynched in the post-reconstruction era between 1877 – 1950. However, experts believe this estimated total number of racial terror lynchings is an underestimate of hundreds, if not thousands. Since early June 2020, six people of colour have been found lynched (including one seventeen year old boy), and nooses have been found hanging from trees in parks in both New York City and South California. The police have treated all of these likely murders as suicides, despite the fact that families of the victims have asserted that the victim was not suicidal. Furthermore, ignoring the historically symbolic form of death – which points largely to modern-day attempts to terrorise and subjugate Black Americans – according to the US Department of Health, the suicide rate among Black Americans is sixty per cent lower than white Americans. This statistic alludes to a systematic attempt by police to cover up multiple murders framed within a symbolic context of white-perpetrated terror. 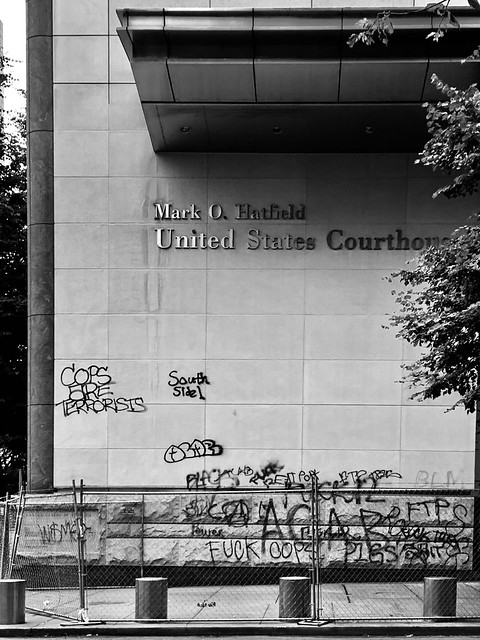 While white supremacist Americans have been engaging in literal murder with the apparent tacit support of Trump, Trump himself has recently deployed federal armed agents to Portland, Oregon, supposedly to ‘protect federal property’ from protestors. The moral failure of a government that prioritizes protection of property over people’s lives, and the reasons behind property destruction have been written about already, but Trump’s latest tactic mirrors the secret police of the world’s darkest and most repressive states and represents a move to intimidate his opposition unlike any we have seen from him before.

Since 14th July 2020 (or perhaps earlier), Black Lives Matter protestors – often peaceful – have been pulled off the streets while walking home, bundled into unmarked vehicles by federal agents wearing no form of identification, and taken to police stations with no idea as to why they have been arrested. In a report by NPR, a victim of this treatment describes how “people in camouflage were driving around the area in unmarked minivans grabbing individuals off the street.” As the Executive Director of Oregon’s Civil Liberties Union has pointed out, “usually when we see people in unmarked cars forcibly grab someone off the street, we call it kidnapping.”

Far from being non-committal or evasive when asked about these unconstitutional policing tactics, Homeland Security Acting Deputy Secretary, Ken Cuccinelli, unapologetically confirmed that this was happening, before continuing on to assert that it will continue to happen as long as protesters target federal property.

And so here is the US in July 2020. Ruled by an authoritarian with a bloated ego, who willingly courts and supports white supremacists in order to stay in power

The federal property Trump and Cuccinelli seem to be most upset about? The Portland Courthouse. A symbol of oppression and state-sanctioned murder of Black Americans for decades. The majority of police who commit violent acts, including murder, against Black Americans are rarely charged, let alone punished. Historically police passed lynchings off as suicides, even in instances where the lynching was advertised before the actual event. So while the police continue to refuse to investigate the current spate of lynchings of Black Americans, the courthouse will continue to symbolise injustice, a capitalist penal system, exploitation and state-sanctioned murder.

Trump’s galvanisation of and further support for white supremacists is evidenced in his choice of Tulsa as the first venue in which to hold a rally this year. Originally planned to take place on Juneteenth, the anniversary of emancipation of slaves in the US, Tulsa is the sight of a racial massacre which played out in 1921. America’s “Black Wall Street” was located in Tulsa at the time, but was incinerated by planes dropping bombs on it, whilst white mobs armed with guns attacked residents on the ground. Not only is the combined choice of venue and date a clear message as to Trump’s values (or lack thereof), but it was here, in Tulsa, at his father’s rally, that Eric Trump referred to Black Lives Matter protestors as “animals.” 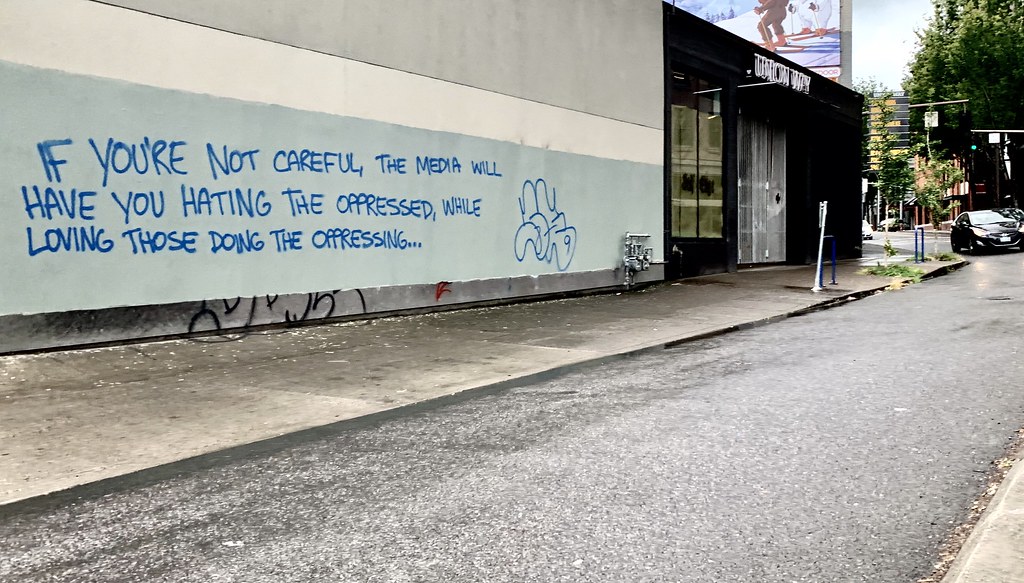 And so here is the US in July 2020. Ruled by an authoritarian with a bloated ego, who willingly courts and supports white supremacists in order to stay in power, no matter the cost to Black Americans. A President who is so hell-bent on retaining power that he screams “fake news” at anybody who reports on him negatively, and who is willing to legislate that anti-fascists are terrorists. He has not taken a single solid stance against racism nor violence against America’s Black community, but rather has continually emboldened white supremacists, referring to them as “very fine people” provided they’re wearing a MAGA hat. Trump’s disregard for Black lives has been an enduring feature of his personality for decades. IN 1989 he took out a full-page newspaper advert advocating for the death penalty for the African American and Latino boys wrongfully arrested and convicted of the rape of a white woman in Central Park. Only a few weeks ago he tweeted a threat to have federal agents shoot BLM protestors. His racism remains intact, but now he has power and influence.

So, the question remains: as the human rights situation in the US reaches terrifying new depths for the Black community and BLM protestors, and as Trump and his son increasingly dabble in genocidal rhetoric, shouldn’t the international community begin acting upon its own norms and values and begin to ask: how do we implement the Responsibility to Protect Black Americans and their allies? It is clear that the Trump regime is manifestly unable and unwilling to protect this section of the population itself. Will intervention be required?