Last Friday was the beginning of Yangon Pride celebrations in a country where human rights abuses are rife, and homosexuality is criminalised. The rising profile of LGBTQ+ rights in Myanmar provides precious hope for queer people in the country. However, the road to equality is a long one.

Yangon’s 2020 Pride festival is organised by &PROUD and runs from January 18th to February 2nd. The opening day in Thakin Mya park attracted thousands of people. The city’s pride events include a boat parade, queer dance performances, drag shows, queer film screenings and panel discussions, and of course lots of rainbows. The films that will be shown include ‘A Simple Love Story’ a short documentary film that was given a distinction in the Wathann Film Festival but was not screened due to censorship, even though there was no nudity. The film centred around a trans couple and asked the question ‘does love have any gender?’.

‘Whoever voluntarily has carnal intercourse against the order of nature with any man, woman or animal shall be punished with transportation for life, or with imprisonment of either description for a term which may extend to ten years, and shall also be liable to fine’

Although this law isn’t really used, LGBTQ+ people are effectively criminalised, and it casts a shadow over their lives. There are numerous other laws that are used to target queer people such as: negligently spreading sexual disease, committing a public nuisance, the 1945 Police Act and Section 35c known as the ‘Shadow Law’. These laws have been used to punish queer people, particularly transgender and gender non-conforming people under the justification of wearing a ‘disguise’ or a covered face between sunset and sunrise (Shadow Law).

Queer people regularly face harassment in Myanmar in public spaces, in the workplace, and in their families and/or local communities. They are often disowned from their families, bullied in the workplace, and suffer abuse from society. ‘Corrective’ measures are common including so called ‘corrective’ rape, to which lesbian and bisexual women are particularly at risk.

Police misconduct toward LGBTQ+ communities is common and legitimizes the perception that LGBTQ+ persons are a source of criminality and sexual deviancy. Courts have even been known to refuse to hear testimony from queer people on the basis of their identity.

In 2013, twelve transgender and gay people were arrested in Mandalay for alleged ‘public disturbance’. They were held in custody and kicked and hit with batons by the police. The detainees reported being verbally abused with homophobic slurs and threats. Some were forced to take off their clothes and were humiliated. This was one incident that was widely reported, but cases like this are far too common and largely go unreported. Chew Su Khin, a young transgender woman, reported to Reuters that she was arrested for the third time in a year and police removed her hair extensions and set them on fire, stripped her naked and took pictures of her. 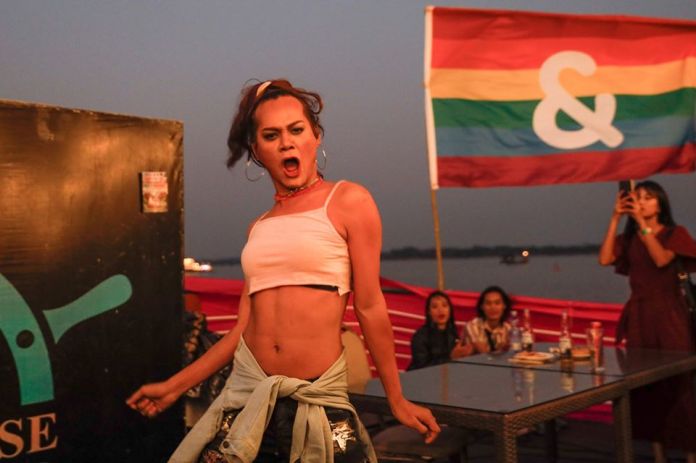 Trans and gay individuals are regularly arrested, assaulted by police and often forced to perform sexual acts. Police also target trans people and sex workers to meet arrest quotas. Sex work is illegal in Myanmar and many marginalised LGBTQ+ are sex workers. Lack of legal protections, corrupt police, and social stigmatisation means that law enforcement can get money from queer people by threatening them with legal action and prison.

Last year, the tragic suicide of Kyaw Zin Win, a gay librarian in who was bullied for his sexuality at work, sparked a nationwide conversation about the treatment of LGBTQ+ people in the country and drew a spotlight to the abuse faced by the queer community.

In a country where queer people live secret lives, representation can have a huge impact.

Since the country entered a democratic transition, more people are expressing their LGBTQ+ identities openly in Myanmar. Representation is powerful. Last month Myanmar Miss Universe contestant, Swe Zin Htet, publicly spoke of her lesbian identity and used her platform to shine a light on LGBTQ+ rights in Burma. The significance of moments like this cannot be understated, as Swe Zin Htet pointed out: “I have that platform that, if I say that I’m a lesbian, it will have a big impact on the LGBTQ community back in Burma,”. She has since become a prominent LGBTQ+ rights advocate and will win the Pride’s ‘Hero’ award for an outstanding contribution to the LGBTQ+ cause. In a country where queer people live secret lives, representation can have a huge impact.

Organisations like Colors Rainbow and &Proud are a lifeline for many queer people in Myanmar. They provide information, legal aid and online and real-life spaces for LGBTQ+ people to create community and find support.

Yangon Pride’s organisers have urged thousands of people to paint their little fingers pink and change their Facebook profile photos to their ‘Love Is Not A Crime’ frame. With the goal of building a campaign to end the criminalization of homosexuality, they have shared a number of videos as part of their campaign that show queer relationships and their supportive family members and co-workers. In one video, a gay couple talk to the camera with their mothers and share their experiences. One mother says ‘no matter how gay my son is, I will always accept him… I can’t let any consequences happen to you because of my refusal’ with the other mother stating; ‘I am proud of my son for being gay’. The two men end with the open question: ‘Our parents accepts us as we are, why can’t you accept us as well?’

Myanmar does not have a good human rights record and equality looks a long way off for queer people, but the increased visibility of LGBTQ+ people and pride events and campaigns like #LoveIsNotACrime are a significant step forward. It is a powerful thing when queer people celebrate their identity and love in public spaces. To see examples of queer people and their supporting families is incredibly moving. In one video, a gay couple talk to the camera with their mothers and share their experiences.

If a parent sees another parent accepting their gay or trans child, then they might be more inclined to support their own child. If we do not see acceptance, there won’t be acceptance, therefore increasing the visibility of not only the abuse that LGBTQ+ people receive but highlighting stories of acceptance and solidarity between queers and allies is a beacon of hope and an act of resistance.

Despite major roadblocks to equality, the Myanmar LGBTQ+ liberation movement is rising. #LoveIsNotACrime

One thought on “YANGON PRIDE KICKS OFF WITH NEW #LOVEISNOTACRIME CAMPAIGN”