Belinda twerks on stage, wearing glitter and a pink wig, and the crowd erupts into whoops and whistles. To the sound of Rihanna singing ‘bitch better have my money’, she makes it rain with cash hidden under her bra. Banknotes fly over our heads.  The compère for the evening, Cynthia Road, tells us this is the first time Belinda has performed drag and the crowd, equally glitter-garnished, erupts once more.

I’m at Euphoria, one of several new drag shows to grace Norwich’s bars and event spaces. “[At Euphoria] queer Gods shall lay a pathway to heaven on Earth”, Cynthia tells me before the show. And in Norwich, heaven is abundant. Shows like Big Fun, Dolly’s Whorehouse and Take The Weight Off Your Mascara (where drag meets bingo) feature local queens like Miss Dee Licious and Bishy Barnabee. Shows range from pop drag, like Euphoria, to queer cabaret hosted by Fever. And the glam is growing: TRANSformations, a drag show hosted by UEASU took place in November, featuring transgender and non-binary performers.

House of Daze, the “drag superstars” of Norwich, offer an equal measure of pop and cabaret for which the demand is high. They’ve performed at Norwich Arts Centre as well as to audiences having brunch. After closing for refurbishment, NAC kicked off its programme with ‘Dazed in Space: a live theatre drag space opera’, featuring ‘star whores’: ‘aliens expelled from Earth for their queerness’.

The Norwich Radical wrote about the ‘emerging glory’ of House of Daze last year.  Playful and political, this art form continues to build a buzz.

So what is driving this success? One obvious explanation is RuPaul’s Drag Race – a hit American TV show – which recently aired on BBC Three, revamped for a British audience. Critics claim the UK version brings new life into the genre. Jodie Harsh, a London-based drag queen, credits the show for giving UK queens “an extra level of much-deserved respect“. And fans have more to look forward to: RuPaul’s DragCon UK, a convention celebrating drag culture, takes place next year. Norwich queens do not emulate Drag Race, but RuPaul has normalised the art and lured potential queens to the stage.

Social media has also had an impact. On Instagram, House of Daze share videos, posters and performers with 1600 followers – rousing fans and ticket sales. Performers of another era would have swooned over such tech. It’s free, fast and requires no permission from the dusty gatekeepers of culture. Whilst studying in Bristol, Cynthia uses Facebook events to engage young fans keen to like and follow – further fuelling the drag dialogue.

Another reason for drag’s surge is a growing concern for issues surrounding gay rights and queer communities. Museums and festivals are helping to amplify queer voices; like Norwich Castle, who offer a tour exploring ‘non-normative gender and sexuality’ in their collections. This summer, Millennium Library exhibited objects like a ‘Drag Queen Deck [of cards]’, ‘to help tell Norfolk’s hidden LGBT+ histories Hidden Histories’. Such events, including Norwich Pride, an annual city-wide celebration of the LGBT+ community with 200 volunteers and 40 events, make drag visible to a wide audience. 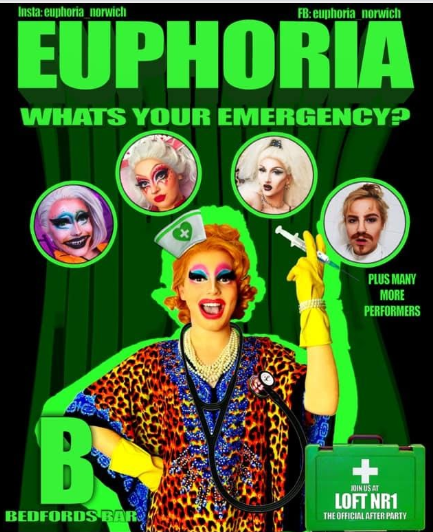 Liv, from House of Daze, describes drag shows as a “baby pride”; smaller, year-long celebrations of the queer community.  It is no surprise these shows are popular. With its balloons, bonnets and sequined gowns, Euphoria can often feel like a rapturous family party. Names like ‘Euphoria’ and ‘Big Fun’ invite you to enjoy yourself. And ‘pop cheese’, a popular genre in drag, is belted out for crowds to sing along with. Songs like ‘Does Your Mother Know’ by ABBA, and Bloodhound Gang’s ‘The Bad Touch’ are ebullient and sexualised. And in-jokes are channelled through songs like Joey Essex’s ‘Reem’, helping to make the big fun sillier.

Such celebrations serve a vital purpose by offering a safe space for queer communities. Fever events are “racism, transphobia, homophobia, sexism [and] body-shaming free. All kind humans are welcome”. Cynthia uses Euphoria to celebrate “the good, bad, and ugly” of society. Drag houses are further security. Cynthia tells me “you have to depend on your drag sisters because there are people that don’t want you to live”. And there’s no shortage of offenses to prove her point: in autumn, a bus driver refused to drive a rainbow-coloured bus. Earlier in the year, a lesbian couple were violently assaulted in London.

As well as offering a safe space, Euphoria gives half of all profits to BLAH Norwich, a youth group for LGBT+ young people. BLAH offers health advice and discussions –  a simple yet vital service given that almost half of all trans people in Britain have attempted suicide. And Miss Dee Licious, a Norwich queen crowned Miss Charity Drag UK 2019, offers make-up tutorials for a £4 donation to the Norfolk LGBT+ Project. Social purpose also drives Liv, who intends House of Daze events to “edutain”: educate and entertain to build a tolerant society.

These events give generously to charity, but money remains tight on the circuit. Liv tells me that, unlike London queens, you aren’t paid enough to sustain yourself. Of the performers I spoke to, most had second jobs, from cinema usher to bricklayer. And drag’s not cheap: a night’s make-up can cost £200. Performers in Norwich are a close-knit bunch, but queens may leave for London.

Still, Norwich is proving fertile ground for new queens like Belinda who are finding support amongst artists and audiences. Shows not only empower the performers, they provide a safe space and fundraise for urgent causes. RuPaul, Instagram and a wider cultural discussion have helped set the stage – but credit is owed to the ingenious and collaborative creative community. In 2018, Liv told The Norwich Radical ‘we want to grow a garden’. Events like Euphoria and TRANSformations suggest this garden is rampant with emerging talent. Year round, drag shows are celebrating queer identities to the sound of empowering pop cheese and providing a safe space for the LGBT+ community. Like London queens, performers must be paid fairly. This will, in turn, sustain safe spaces and this blossoming art form.

As Rihanna puts it: ‘bitch better have my money’.