It’s been over a week since Turkey launched a fresh military offensive targeting Kurdish forces in northeast Syria. The death toll in Rojava is rising, and an exodus of civilians from the area has already reached a mass scale. Conflict in Syria thus deepens, becoming ever more complex, with the Syrian regime armed forces now reported to have moved into Kurdish controlled Manbij in order to counter the Turkish invasion. But what has sparked this new wave of insurgency? What role does the US have? What are the Kurds fighting for? And what significance does this have for the wider global justice movement?

For those of us who don’t know, what is Rojava?

Rojava is the name given to a self-governed autonomous enclave in northern Syria that runs along the Turkish border. It is a territory controlled by the Kurdish-led Syrian Democratic Forces, an alliance of primarily Kurdish, Arab and Assyrian militias formed during the Syrian civil war. In 2012, when President Assad pulled Syrian forces out of northern regions in order to focus military power on defending major cities in the west of the country from political uprisings, it left a power vacuum in these traditional Kurdish territories. This vacuum was filled by the Kurdish ‘Democratic Union Party’ (PYD) who established three autonomous zones; Afrin, Kobanî and Jazira. These zones were set to be governed under what the Kurds called ‘democratic confederalism’; a radical experiment focussing on democracy, women’s liberation and ecology.

Kurdish militias were forced to turn attention towards civilian protection

This emancipatory political project had barely had a chance to truly take effect when in July 2014 the Islamic State of Iraq and the Levant (ISIS) swept through Syria, and the Kurdish militias were forced to turn attention towards civilian protection and survival, and away from planting the seeds for their democratic political project. Kurdish forces including the People’s Protection Unit (YPG) and Women’s Protection Unit (YPJ) were soon receiving support from the US in the form of weapons and air strikes, and this alliance proved immensely successful in the thwarting and ultimate defeat of ISIS forces in eastern Syria, with Kurdish fighters hailed by the West as the most effective tool in combating the Islamic State.

As Kurdish forces began liberating cities in northeastern Syria from ISIS control, they began to incorporate these civilian populations into Rojava; regardless of religion or ethnicity. They renamed their territory the Democratic Federation of Northern Syria, and allied Kurdish and non-Kurdish forces joined to become the Syrian Democratic Forces (SDF). Neighbouring Turkey, however, fears the expansion of Rojava as it claims that the Kurds in Rojava are another front for the Kurdistan Workers Party (PKK) who have been engaged in conflict with Turkey within its own borders and who President Erdoğan’s regime has classed as a ‘terrorist organisation’. The existence of Rojava therefore stands on fragile ground, with continued insurgencies, Turkish hostility, and denied legitimacy from Assad and Syria.

What does Rojava represent? And what is ‘democratic confederalism’?

Rojava is the physical and political space for what people are calling an ‘ecosocialist revolution’. Here, the guiding principles of governance under ‘democratic confederalism’ are meaningful democracy, women’s liberation and ecology, offering a radical alternative to the destructive and oppressive global capitalist system. Under these principles, a new progressive democratic society can be forged. Local administration forms the basis of governance, cooperatives and communal projects drive a fair economy, education and health programmes are free to everyone and importantly women are afforded equal rights as their male counterparts in society, the workplace, and even in the military. The focus on ecology, and remedying the environmental destruction of a landscape scarred by warfare is fuelled by reforestation projects and sustainable agricultural practices.

It challenges the very legitimacy of the nation-state system, proposing instead the model of a ‘revolutionary society’

This fertile form of resistance has set a hopeful example for environmental and social justice worldwide; acting as an embodiment of progressive ideals and a lived defiance of capitalistic and patriarchal oppression. It challenges the very legitimacy of the nation-state system, proposing instead the model of a ‘revolutionary society’ based on community, grassroots regeneration and solidarity. 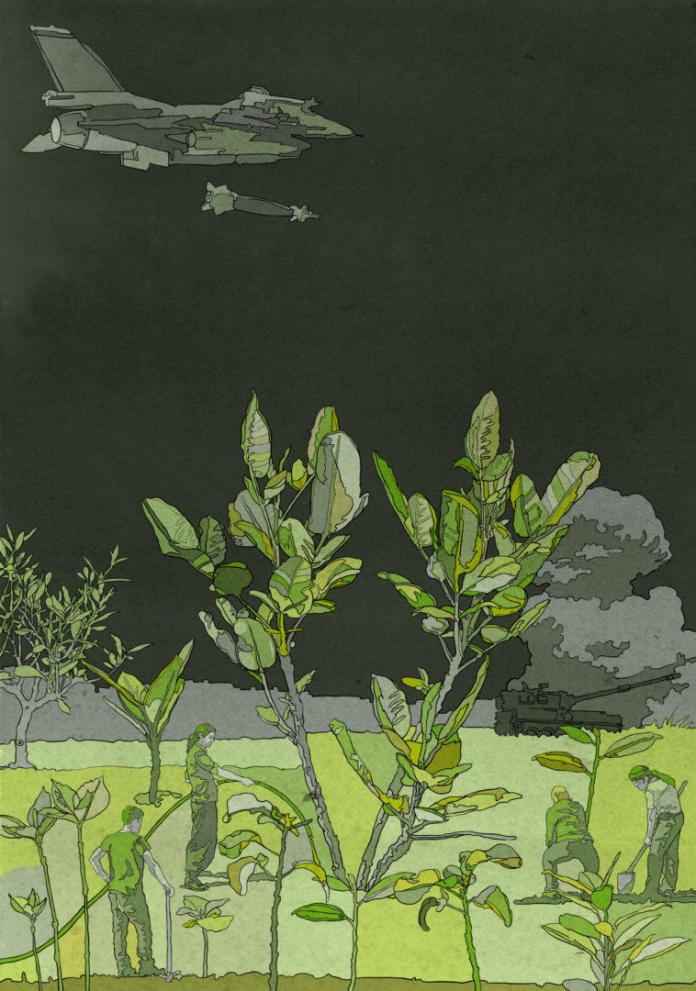 But what’s behind the recently renewed conflict?

In December 2018 President Trump announced that the US Military would be withdrawing its 2,000 troops from Syria as a result of ISIS’s defeat. This declaration received instant heavy criticism with many fearing that Turkey would capitalise on this move and proceed to launch attacks on Kurdish forces across the Syrian border. Turkey is currently host to an estimated 3.6 million Syrian refugees, and claims to want to create a ‘safe zone’ in the north of Syria in order to repatriate those displaced during the civil war. This, coupled with Turkey’s aims to bring security to their southern border and combat PKK-affiliated ‘terrorists’, has resulted in their recent military operation. Last weekend, the US military accelerated its withdrawal plans with sight for an almost complete withdrawal, leaving their anti-ISIS allies to fend for themselves. This announcement came just as Turkey began its advancement and cross-border invasion of Kurdish territories, targeting YPG and YPJ Kurdish forces and allegedly backing Syrian rebel groups (notably the Free Syria Army) who have significant extreme Islamist demographics and ties to al-Qaeda. Furthermore, many now fear that Turkish insurgencies could result in the freeing of thousands of ISIS fighters held in camps, as the Kurds have declared that in the face of invasion guarding these prisoners cannot be a priority.

Now should be a time for people to return to their homes. Those who have been liberated from ISIS controlled territories should be able to return and rebuild lives under the new democratic system in Rojava, but instead renewed conflict is causing a new wave of displacement, with over 160,000 having fled the area already according to UN figures, and the statistic likely to be rising.

Has there been any response?

On the ground, Assad has made a Russia-brokered deal with the SDF to offer their support against Turkish invasion in return for further control of Syria’s northern territories. Although this Syrian military assistance is desperately needed by the SDF, it could mark the beginning of the end of Kurdish autonomy in those regions.

In the international sphere, there has been an obvious diplomatic backlash to Turkey’s military operation. The US, witnessing the criticisms it faced after troop withdrawal proving to come true, has called for a ceasefire and has also imposed economic sanctions on Turkey’s defence and energy ministries as well as freezing the US assets of top Turkish ministers. Although EU countries including the UK have not yet followed suit by imposing sanctions upon Turkey, they have agreed to suspend arms exports to the country. The UK government has said it will not grant any new arms export licences for weapons which may be used in the Turkey-Syria offensive, however this does not stop companies from trading on existing licenses. Since 2014 the UK has sold £1.1 billion worth of arms to Turkey, and despite insisting that these trades are monitored and tracked it remains difficult to determine in whose hands these weapons end up, and for what purpose they are used.

Many have taken to the streets and to social media to express solidarity with Rojava, with demonstrations and protests taking place in cities across the globe. A Kurdish protester in London was quoted in The Guardian as saying: “The world does owe the Kurdish now for what they did in Syria. If you really mean it, the British should stop selling Turkey weapons.” However, solidarity has not only been shown by the Kurdish diaspora community, but also by those who sympathise with the Kurdish struggle on intellectual, political and moral grounds. Rojava has been described as a ‘utopia’ and the radical alternative it proposes to capitalism many find an exciting and enticing concept.

Not only does the international community owe Kurdish fighters respect and support for the vital role they played in fighting the Islamic State, but the Kurds’ unique and ambitious vision for a democratic, feminist and ecological society is a sign of hope amidst horror and destruction, and should be defended and celebrated by all.

Here are some useful links for keeping up to date with developments in Rojava: