During early October 2019, in the space of just nine days, Iraqi state forces killed over one hundred young people and injured thousands more. Thousands. In just nine days. As anti-corruption protests broke out, the state deployed live ammunition almost immediately. In some places, snipers positioned themselves on rooftops, picking off young Iraqi citizens who had nothing left to lose except the hope that they would one day experience a government that provides for their basic needs rather than greedily shovelling oil revenue into its own pockets.

The catalyst for these protests was the sacking of Lieutenant General Abdul-Wahab al-Saadi, who led the fight against ISIS as part of Iraq’s elite counter terrorism unit, and who was widely acknowledged as the liberator of Mosul. As soon as his transfer to an administrative role was made public, speculation arose that ‘his refusal to back a specific political party made him unpopular among officials in Baghdad’, and that he was ‘removed from his post because he broke sectarian barriers in Mosul.’ The sacking of al-Saadi was widely perceived as emblematic of the corruption that has characterized successive post-U.S invasion administrations, resulting in widespread protests against corruption, unemployment and poor public services.

the Iraqi public suffers from daily electricity cuts, rabid poverty, insufficient access to clean water and a myriad of other negative social factors which have a severe effect on quality of life

Iraq is the sixth biggest oil producer in the world, yet 53% of Iraqis are vulnerable to food insecurity and the unemployment rate remains close to 30% – higher for young people. Iraq ranks an abysmal 168th out of 180 on Transparency International’s corruption index, scoring a mere 18 out of 100. Transparency International notes that corruption is pervasive at all levels of society, including the military and security services. Meanwhile oil smuggling is a very real problem, contributing to overall poverty levels and an ever-increasing wealth gap, as oil wealth remains concentrated in the hands of the elite. Meanwhile, the Iraqi public suffers from daily electricity cuts, rabid poverty, insufficient access to clean water and a myriad of other negative social factors which have a severe effect on quality of life.

Whilst the current Iraqi administration, along with previous administrations, is most definitely to blame, they share that blame with Britain, the U.S and other external colonial powers dating back to the early twentieth century. Zahra Ali, in her book on women and gender in Iraq, details the colonial history of the country, and unsurprisingly, imperialism can be viewed as the root of the crisis currently experienced by the Iraqi public. Ali notes that the Iraqi Constitution has been continuously drafted and redrafted by external powers since 1921. The British mandate era saw the establishment of a legal system which contained different provisions for Iraqis depending upon their ethnicity, religion and gender. Exacerbating this creation of a divided society was the fact that the British imperialist authorities implemented their policies in a top-down approach, rewarding complicit members of the Iraqi elite with wealth, power and privilege to the detriment of “ordinary” Iraqis.

Between the 1940s – 1970s Ali describes how the Communist Party dominated the political landscape, helping to “bridge sectarian divides” sown by the British decades earlier. The political objective of this era was triumph of egalitarian citizenship over difference and division, but as history illustrates time and again, a united populace will not be tolerated by the power-hungry and corrupt. Thus, after the Ba’ath Party coup in 1963, communists were persecuted and Shia Muslims repressed, resulting in a subsequent ideological void which was filled by political ideals based upon sectarianism and identity.

Then came Saddam Hussein’s terror-fuelled reign. His invasion of Kuwait was catastrophic for ordinary Iraqis, resulting in the coalition forces dropping more than 88,000 tons of explosives on Iraq in just six weeks. That’s more than was dropped on Vietnam throughout the whole Vietnamese war. Overnight, Iraq was transformed from having well-functioning public services and a strong economy (albeit alongside a terrifying political climate), to suffering decimated infrastructure, insufficient (if any) public services, and completely inadequate healthcare and sanitation. The UN-imposed sanctions made the lives of Iraqis insufferable, and caused employment rates, standards of education, healthcare, and welfare to plummet. The repercussions of these sanctions continue to be felt today by Iraqis, though they probably didn’t even make Saddam flinch in his gilded palace.

Whilst the current Iraqi administration, along with previous administrations, is most definitely to blame, they share that blame with Britain, the U.S and other external colonial powers

The 2003 U.S invasion of Iraq and subsequent exercise in poorly-informed neoliberal state-building only saw a continuation of misery for the Iraqi people. A report re-published by the Brookings Institute describes the post-invasion phase of the U.S occupation of Iraq as ‘the least well planned American military mission since Somalia in 1993’, continuing on to call the consequences for Iraq ‘far worse than any set of military mistakes since Vietnam.’ The US-led Coalition Provisional Authority (CPA), which charged itself with rebuilding Iraq after the invasion, pursued policies which simultaneously economically pillaged the country whilst further entrenching sectarian division.

Zahra Ali points to how Paul Bremer, head of the CPA, turned Iraq into a neoliberal sweet shop, by retaining only those existing policies of Saddam’s which ‘restricted collective bargaining and trade unions’. Bremer went on to introduce legislation which would allow the entrance of transnational corporations into Iraq, ‘lowering corporate taxes from 40 to 15%, and permitting companies to own 100% of Iraqi assets. Any corporation working with the CPA was also exempt from taxation.’ So, in a country reeling from decades of sanctions, an inhuman bombing campaign and excruciating poverty, rather than plough corporate taxes into reconstruction of infrastructure and rehabilitation of public services, big, wealthy businesses didn’t contribute a single penny to the country they were now leeching from.

Aside from the economic disaster which the CPA post-invasion administration represented, a political disaster was also unleashed. Ali describes how members of the new Iraqi Governing Council were selected by the CPA according to a ‘sectarian, limited and prejudiced vision of the Iraqi people,’ with many Iraqi politicians and academics being excluded from the proceedings for creating a new Iraqi Constitution due to their opposition to the U.S invasion. In U.S-occupied Iraq, establishing and filling ethno-sectarian parliamentary quotas took precedence over identifying candidates with suitable qualifications and experience. The CPA had thus managed to institutionalize ethno-sectarian division, whilst at the same time wasting the opportunity to build a meritocratic Iraqi government, instead opting for the current mess: a government that can best be described as somewhere between kakistocracy and plutocracy, and in which disfunction and corruption is rampant. 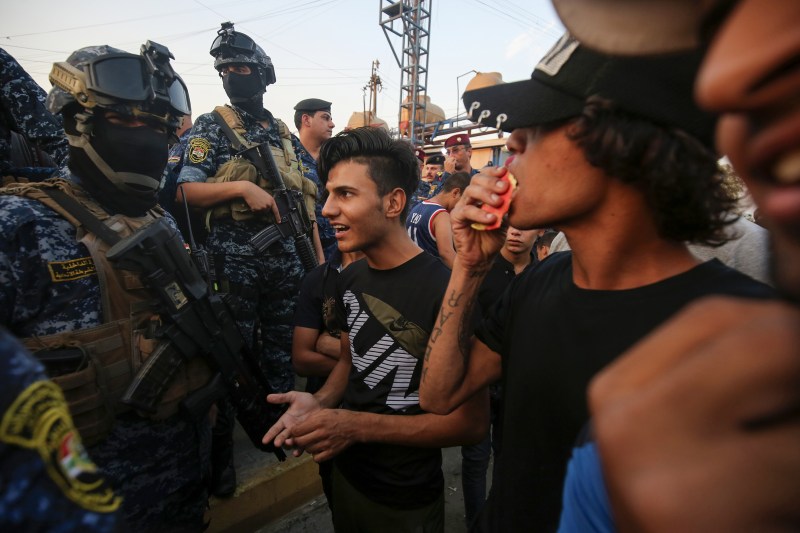 The most surreal example of the plutocratic nature of the current government is demonstrated by Mohammed Halbusi, the speaker of parliament, who apparently without irony has vowed to stand with the Iraqi people in their fight against governmental corruption. The same Mohammed Halbusi whose very position within parliament is mired by controversy and allegations of corruption, as he is widely believed to paid 30 million dollars for his seat. View this mind boggling set of affairs alongside the fact that one quarter of Iraqis believe the judicial system to be corrupt, and combine it with rampant unemployment rates and crippling poverty, and it is easy to understand why a disenfranchised youth have taken to the streets to protest. However, this expression of anger and disillusionment amongst young people who have known nothing except corruption and puppet politics manipulated by hegemonic powers, is unlike the Arab Spring and months-long struggle in Sudan, both of which saw protestor fighting for democracy. It seems a significant number of Iraqi protestors are so tired of the democratic façade they have been subjected to for so long, that they are ready for a military, or authoritarian leadership, provided that leadership represents only the Iraqi people. Of course, great caution should be exercised before deeming these narratives to be representative of Iraqi public sentiment, but in May 2018, the voter turnout was the lowest since Iraq’s first democratic election in 2005, which is indicative that democracy is a tired concept in Iraq.

The lesson to be learned here, is that after more than a century of external interference and sanctions, the Iraqi people should be given the opportunity to control their own country’s destiny. The Iraqi youth ask for simple things: transparency of governance, jobs, clean water, public services. International corporations currently filching resources and wealth should pay fair taxes or leave. The Iraqi people should be supported in ousting corrupt politicians and rebuilding the leadership of the country in a reflection of Iraqi interests rather than the interests of hegemonic powers. We must demonstrate solidarity and hold those in power accountable. Iraqi youth should never again be put in a position where poverty and disenfranchisement drives them out on to the streets, for greed to then pull the trigger and kill them.