My second week at Edinburgh Fringe Festival offered a selection of shows more overtly dealing with Feminist themes. This selection ranged from the role that gender has to play in our experience of the dating world in the digital age, an exploration of the ‘pretty privilege’ set against trans experiences, to an examination of celebrities as female role models.

The show opens to ‘Escape’ by Rupert Holmes, a song that has become synonymous with dating apps, with users regularly using the lyrics ‘I like Pina Coladas, and getting caught in the rain’ in their profiles. Whether these people are cheating on their partners still eludes me.

From Loquitur Theatre, the show follows the story of Polly – a single woman in the digital age, embarked on a quest to find love via a multitude of dating apps. It’s amazing how similar my experiences of these apps have been in the last year, and they’re bound to be relatable for many. Trying to move on from an ex, slowly putting yourself out there, getting caught up in a whirlwind of easily available sex, leading to stealthing and STI tests, only to be left broken again after an intense sexual and romantic partner ends things, and sometimes commits one of the worst dating crimes: ghosting. It raises important yet shocking questions about the role of technology in dehumanising other people, linking to the increase in vile acts such as “stealthing”. Stealthing is a form of sexual assault whereby a man removes the condom without consent, where you’re “lucky” if you even manage to catch them doing it. Whilst this is completely unacceptable, what is also worrying is the fact that “ghosting” is often seen as acceptable – when in reality it’s mentally and physically traumatising for those on the receiving end.

Lobsters seem to represent the fairytale myth, as we are conditioned to believe in finding love, perpetuated and enforced by friends and family as well as society as a whole. Polly exclaims ‘just because I want to fall in love doesn’t make me a shit feminist’, but ultimately it is self-love that – as clichéd as it sounds – will enable us to receive any love that may come our way.

Although a one-woman show, it is hard to imagine the experience of trans women articulated better than Edalia Day in Too Pretty To Punch. Comedic from the onset, it is also poignant and poetic, featuring music both played live on banjo and as background music. The show is also captioned throughout, and includes an innovative use of projection.

Edaila Day doesn’t shy away from any topic, looking at the masculine/feminine continuum of physical appearance and movement, interrogating the use of boxes, the role of gender – even if a social construct – contemplating her own journey through to the age of 34. For cis-gendered audience members it will be educational, both in terms of statistics used and the personal story described. She also touches on what has been termed as ‘pretty privilege’, but this light-hearted note is contrasted with an exploration of violence against trans people.

The internet, despite its many, lurking trolls, is heralded as a space where people can come together by simply asking ‘does anyone else feel this way?’ and gradually the boxes we are put inside are broken – we have the agency to replace them with new vocabulary, creating our own boxes when the old ones don’t fit. 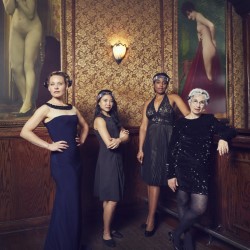 At the centre of The Female Role Model Project were four people, including a white bisexual woman from Slovenia, a straight Singaporean-Chinese woman, a woman who was West Indian born and New York raised with questioning sexuality, and a white straight older woman of 66 who later revealed a non-binary identity. At the centre, us – the audience.The show, revolving around the celebration of female pioneers in popular culture, combined performance, interactive games and audience participation by using ECG headsets to monitor neural activity of both the performers and viewers alike. Although only certain audience members were able to put on the ECG headsets along with the cast, these would form visual and aural representations of their neural activity, as the figures, (including Marilyn Monroe, Kim Kardashian and Melania Trump) recounted memories of their mothers.

The show started with a group activity, where the whole audience was invited on stage to divide words into masculine and feminine. It seemed obvious to me that these were looking at stereotypes and assumptions, though I questioned the way some of the audience members were dividing these words. For the majority, feminine words were flower, independence and intuition, and masculine words included money, post, and infidelity. The show had then explored the way those words are gendered in different languages.

The show is divided into children, teenagers and adults and it included playing games, a beauty contest and a panel discussion. With the audience such a big part of the show, it must be different with every show. What I noticed about the beauty contest in particular, was how the “judge” from the audience often regarded what was beautiful as the opposite of what they themselves looked like. Whilst celebrities certainly connect with the theme of role models, I found the women playing them far more interesting than those they pretended to be in the panel, suggesting that the celebrity world is not the best place to look for role models. With various different fragments making up the show, the ending didn’t necessarily feel like an end point, exploring consciousness and biological connections. Each element was filled with intrigue and delight.

Edinburgh Fringe Festival runs until the end of August; keep an eye out for shows that may tour.