Since 5th August 2019, the Indian government has shut down Kashmir in the most repressive and terrifying fashion possible. 48,000 Indian troops have been moved into the state, making it, with 70,000 Indian troops already posted there,  the most densely militarized zone on Earth. These troops are now operating under a “shoot-to-kill” policy and hundreds of Kashmiri human rights activists, academics and business leaders have been arrested. Meanwhile, the Indian government has simultaneously imposed a media and communications blackout, cutting off the internet and thus preventing Kashmiris from being able to communicate their suffering in real time to the rest of the world. Pakistan too revoked state subject rule from Gilgit-Baltistan (part of Pakistan occupied Kashmir) in 1974, in a move similar to India’s current strategy. However, in doing so, there was no media black-out nor curfews imposed.  India, on the other , has jailed all Kashmiri leadership, transferring them to jails in New Delhi, as well as, according to a magistrate speaking on condition of anonymity, arresting and detaining over 4,000 Kashmiri citizens since 5th August.

Kashmir has been an occupied land, and Kashmiris an oppressed people, since British colonial powers divided the Indian sub-continent along religious lines in 1947. The princely state of Kashmir was at that time ruled by a Hindu, while the Kashmiri people were and are predominantly Muslim. With competing claims from both India and Pakistan on the province, the then Governor-General of India, Lord Mountbatten, suggested that accession should be confirmed by a plebiscite, election, or referendum. However, self-determination has not been made available to the Kashmiris; the best option they were offered was a limited form of autonomy under Article 370 of the Indian Constitution: a form of autonomy which remained buried under continued Indian military occupation and brutal repression. 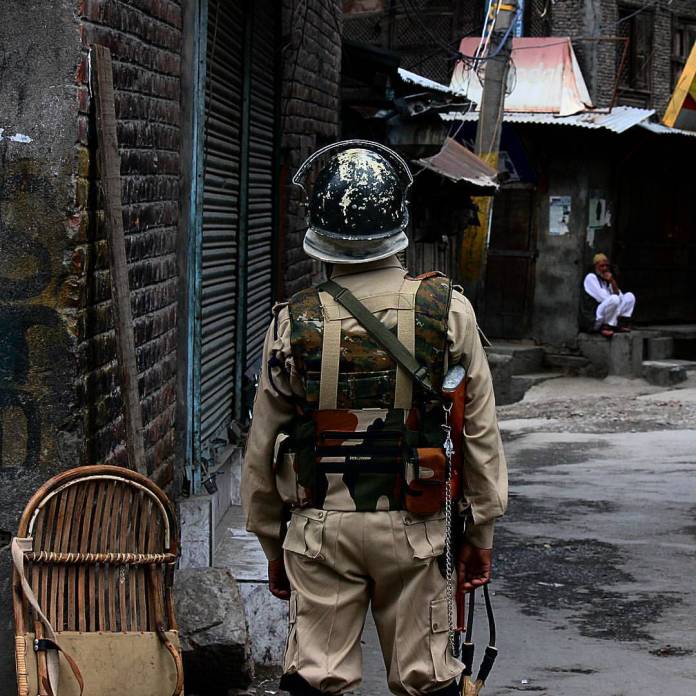 By revoking Article 370, India is also turning into a colonial master. Indian citizens can now buy land and settle in their new domains; Kashmir is now open for business, with Mukesh Ambani, India’s richest industrialist, already making plans for investments. The revoking of Article 370 also led to the dissolution of Article 35A, which granted rights and privileges that made Kashmiris stewards of their own territory. ‘Open for business’ can mean Israeli-style illegal settlements, as well as Tibetan-style population transfers.

The Indian occupation of Kashmir has been characterized by murder, torture, disappearances, and, since 2010, blinding and eye injuries

The Indian occupation of Kashmir has been characterized by murder, torture, disappearances, and, since 2010, blinding and eye injuries. A notable massacre took place in 2010, when Kashmiris protested in the streets in response to the murder of an eight-year-old Kashmiri child by Indian troops. Indian state forces reacted to the protest by slaughtering 120 people, yet not one member of those forces has been charged or convicted. This incident is not exceptional, rather it is emblematic of ongoing impunity for perpetrators of Indian state violence and India’s policy of violent repression. In early 2019, the Association of Parents of Disappeared Persons and the Jammu Kashmir Coalition of Civil Society called for a UN investigation into more than 400 cases of torture carried out by the Indian army since 1990. The groups believe that tens of thousands of Kashmiris have been tortured over the past three decades, with 70% of torture victims comprising civilians, including human rights activists and children. Since 2010, increasingly frequent reports of use of pellet guns by Indian forces in Kashmir have been filed : Indian forces fire the guns into crowds at head height, over time resulting in hundreds, if not thousands, of Kashmiris being blinded or suffering other severe eye injuries. A New York Times article which offers an eye-witness account of one Kashmiri hospital’s struggle to cope with an endless stream of eye-related injuries, makes the chilling observation that ‘2016 will almost certainly be remembered as the year of dead eyes.’

Prime Minister Narendra Modi of India has sought to completely shut down and isolate Kashmir from the rest of the world since the 5th August, because that is the date upon which he announced that Article 370 would be revoked. One commentator describes this revocation as ‘the most far-reaching political move on the state of Kashmir in nearly seventy years.’ Modi’s Bharatiya Janata Party (BJP) promotes a particularly virulent form of Hindu ethnonationalism, which has resulted in a rise of violent Islamophobic crimes across India, including multiple lynchings. Modi has never had any intention of letting the majority-Muslim state of Kashmir gain independence, determine its own political identity, or even maintain the little autonomy it had. Rather, through a brutal military occupation which mirrors that of the Israeli occupation of Palestine, Modi plans to beat the Kashmiris into submission until they accept the status of second-class citizens (or merely non-citizens) with no rights to land or recourse to justice: the alien other to the BJP’s brand of Hindu ethnonationalism. This hardly seems surprising given Modi’s history as chief minister in Gujarat.

Like Israel, India seeks to produce and maintain a political discourse which justifies its actions in Kashmir as a security issue: the Kashmiris as terrorists. It seems  the Security Council is also following the same route as it treads in the case of Israel and Palestine. In a meeting on 16th August 2019, after over five decades it discussed the Kashmir issue. What Pakistan is hailing as a political victory is far from it; the Security Council could not agree on a statement, despite India claiming it to be an “internal issue”. India claimed Eid al Adha to be the most peaceful Eid in the valley in 30 years, which seems ironic given the curfew imposed.

Unfortunately, some media publications are parroting the notion that Kashmiris are terrorists, without giving due consideration to the fact that resistance to a military occupation which is characterized by state-sanctioned human rights abuses deployed as a political-military strategy, and widespread, insidious oppression cannot, logically or morally, be deemed terrorism. Such resistance is a legitimate struggle for human rights and freedom. The powerful in these situations promote the dissemination of pictures of young men throwing stones, protesting, or engaging in acts of armed resistance, weaponizing these images by deliberately portraying the subjects as dangerous and unpredictable and thus gaining political and domestic support for military occupation. The voices and experiences of women are consistently overlooked and neglected, yet women’s narratives are the most illustrative in terms of gaining a comprehensive picture of the effects of occupation and the heart of the resistance.

resistance to a military occupation which is characterized by state-sanctioned human rights abuses deployed as a political-military strategy, and widespread, insidious oppression cannot, logically or morally, be deemed terrorism

In every resistance movement, men and women experience conflict differently. Gendered vulnerability in war stands true even in Kashmir. Rape has been a very common weapon of war in the valley; it is not exceptional, but rather , a routine tool utilized by the Indian state as an expression of power. The most harrowing incident of rape in recent history was an incident that took place on the 23rd February 1991, when 31 women from the two villages of  Kunan and Poshpora, in the north of Kashmir’s Kupwara district, were mass raped by the 4 Rajputana Rifles regiment of the Indian Army. Apart from this horrific case, there are others like that of the double murder and rape of Asiya and Neelofer, which have found their way into the archives of Kashmir’s history. Documenting and archiving rape and sexual violence has always been difficult, especially in Kashmir. There are many reasons why rape is reported and many more complex reasons as to why it is not. Kashmir being a largely Muslim-dominated conservative state, means that most women are faced with not just the patriarchal nature of the state but also the patriarchal nature within the state. Anjum Zamrooda Habib, political activist and author of Prisoner no.100: An Account of My Nights and Days in an Indian Prison, spent five years in prison under fabricated charges. She is known to be the first woman to be charged with POTA (Prevention of Terrorism Act). In an interview she elaborated on the same: “When resistance is amalgamated with politics only power seems to be the concern, plus in the war zone memories are short-lived, add to this the fact that the whole world is male dominated and men don’t want to acknowledge the sacrifices of women and all these factors add up to foster this apathy. The fragility of memory coupled with the general patriarchal nature of society tends to make us forgetful or at least ignorant of the participation of women in resistance”.

The BJP has proved that it is a government for whom power and control comes before dignity and human rights, a government for whom land matters more than its people. With one violent stroke, the Modi government clamped down any dream or call for Azadi (independence) in Kashmir. On 5th August, Modi satiated the Hindu nationalists’ dream. As of now, the wait is for the government to lift the communication ban. A lot has been spoken about Kashmir and on Kashmir, but the voice of the Kashmiri has been silenced. “I still can’t forget how fast my heart was beating minutes before the announcement on 5th August, waiting anxiously for what is going to happen to us. I can’t stop replaying that. Waiting for the oppressor to announce the verdict. That sort of helplessness chokes me up,” said a friend who managed to get internet for a few hours as she stayed close to the airport in Kashmir.

On 15th August, India celebrated 73 years of Independence from the British. Even as most Indians celebrated this grand day, an entire region was clamped down and suffocated into silence by the very same country that fought against such tyranny 73 years ago. Overnight decisions and surprises seem to be Modi’s forte. In 2016, in one announcement, the Modi government declared 80 percent of the country’s currency illegitimate. This time, by turning Kashmir into an open-air prison and calling it ‘peaceful’, the Modi government forcibly annexed the state of Jammu and Kashmir into India without any discussion at all.

On 15th August, as India celebrated its Independence Day, most Indians failed to realise that India had attained the very same shape of the beast it sought freedom from 73 years ago.

Nidhi Suresh is from India and worked in Kashmir as a journalist for one year. She is an MA graduate in Conflict Studies and Human Rights from Utrecht University. She can be contacted on nidhisuresh02@gmail.com

Hailing from Pakistan, Saba Azeem is a conflict analyst and a humanitarian aid worker who has lived in Afghanistan, Syria, Jordan and Iraq. She also has an MA in Conflict Studies and Human Rights from Utrecht University. She can be contacted on saba.azeem@gmail.com

All images by Nidhi Suresh