Edinburgh Fringe festival seems to get bigger and bigger each year; there are hundreds of shows to choose from and the densely-packed programme can be difficult to decipher. Here we have briefly reviewed three distinct shows from the 2019 edition, dealing with the mind, the body, sexuality, relationships and gender.

Everything I See I Swallow

As soon as we step into the room, the atmosphere is set as one of our main protagonists – Olivia (Maisy Taylor) – is suspended in the air by rope, naked but for her flesh-coloured underwear, as dry ice drifts across the stage. Her mother and art curator (Tamsin Shasha) is dressed in a pink suit as Olivia speaks about being called beautiful. It seems shallow at first, but through story-telling and shibari, the show explores a range of complex subjects, without drawing a strict conclusion, instead allowing audiences to reflect on the issues raised. Shibari is the art of Japanese rope bondage, and at first its use seems unclear, but gradually its purpose is unified with the spoken word, becoming a metaphor for control, dominance, submission, and how this relates to gender. It is also very much tied to sexuality, BDSM and non-traditional relationships like polyamory which are all touched upon, though Feminist debate is at the centre of the show’s themes, as mother and daughter argue through quotations from Feminists from Simone de Beauvoir to Caitlin Moran. The character of the mother also begins to explore her own sexuality as she tries on underwear in a changing room, though mixed with anger, later painfully chasing a projected image and tearing her clothes off. Through beautifully routine movements across the ropes, mother and daughter explore self-objectification in a world where we can see the ‘drip of everyday sexism from playground to podium’, the self-consciousness feeling beautiful can bring, of not wanting to be looked at, yet the need to own our sexuality. 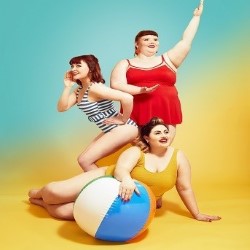 The Roaring Girls aka Rachel Abbey, Josie Morley, and Sarah Penney bring their debut show ‘Beach Body Ready’ to the Fringe. The show combines comedy, spoken word storytelling, video, and dance to create a feel-good, funny, and touching exploration of three women’s battle against negative body image. We get to know each of their personal experiences through anecdotes and overshares, and a game of ‘Which Bitch?’ Whilst we may want to believe that a ‘beach body’ is simply a body on the beach, this show gives an honest portrayal of the pressure women feel and why we feel it. From waking up at 4am to run so nobody will see you, to being cheered at a spin class for continuing after throwing up, to finding out the guy chatting you up is having a ‘fuck a pig’ competition, these unique experiences all tap into painful memories that stay with many of us. The compulsive competition and comparison between women, mothers passing down negative body image like heirlooms, magazines circling and shaming women for normal and natural bodies, the list is endless, and it builds to anger. Quelled with humour, Lizzo’s ‘Good As Hell’ plays – an anthem for body positivity – as these women begin their mini-revolutions. Inviting us to join them, we are handed a zine on the way out, eyes a little watery, stomachs a little stronger. 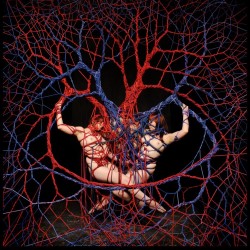 Written and performed by Kit Redstone, Passengers features Neil Chinneck and Jessica Redstone on stage as physical representation of the protagonist Max’s mind, with the voice of Rory Fleck-Byrne at the start and end giving us the outward voice of Max. It felt clear to me that Redstone was the writer, who was inspired to create the piece due to his own experiences with Dissociative Identity Disorder. Similar to the concept of ‘insanity’ being a sane response to an insane world, the play purports the idea that everyone is made up of different personalities, a concept learnt through the author’s discovery of IFS (Internal Family Systems). That said, the play also highlights the struggles that are connected with DID and the way that certain aspects of one’s personality can shut down, others take over, and these have a very real impact on one’s decisions, behaviour, and overall quality of life. It seems apt that it is highlighted in the programme notes that director and dramaturg Jessica Edwards, the actors, and the rest of the creative team have been integral to what the show has become today. As well as offering an engaging narrative, where the same memories are seen through different lenses, the piece is highly metaphorical, mixing it with the more literal, the harshness of language such as ‘co-dependent pussy’ contrasting with the beauty of time stopping and fantastical dreams of a Californian escape, the sorrow of being sentenced to a lifetime of shame, alongside the humour littered throughout.

Having known Michelle Madsen of Bait Theatre through her spoken word poetry, Kill the Princess appears to take all the metaphors of poetry and turn them into something physical. Joined by Lizzy Shakespeare, the show – categorised under cabaret and variety – aims to express what they have struggled to put into words. The characters flit between performances of masculinity and femininity in a hyperbolic way, very rarely speaking, but incorporating storytelling, clowning, spoken word, and illusion. Interacting with the audience, it playfully pokes fun at gender stereotypes, which can be extremely harmful to us, and thus by making them ridiculous, lessens their power. The spoken word at the end helped to solidify the experience of the show, and without giving too much away, we are uplifted by what comes after we have killed the princess.

Lewys Holt mixes improvised dance with text, sound, music, and spoken word to explore the phrase ‘an apple a day keeps the doctor away’. Oddly enough, this is a phrase I think about a lot, as I do often each an apple a day. However, Holt takes this to the extreme in the show, for comic effect.  In the show, Holt talks about the acceptance of the anxiety that is a central topic explored in the piece, and says it ‘strokes your head while having its own little freak out.’ I find the use of movement throughout soothing, and the relatability of the text and spoken word is comforting, and the piece  as a whole is uplifting. In telling the story of visiting the doctor after an injury, by the end I question whether this injury was self-inflicted. Relating to the difficulty of relaxing, feeling anxious about speaking to others, being self-critical, and having a fear of being hungry, these are the ‘circles and binds we create for ourselves through words’, which explains the freedom and security created from the feeling of watching the improvised dance.