At 4 AM, in Lowestoft, Suffolk, a crowd assembled on the beach. On stage, Talvin Singh performed a 45-minute rendition of ‘Light’, from his Mercury Prize-winning album Ok. Waves of dreamy ambient sound flooded in. With impressive synchronicity, a soft blue light filled the sky.

It was the weekend of the summer solstice, a celebration of the arrival of summer, and the longest day of the year, at Britain’s most easterly point. We were gathered for First Light Festival; an eclectic pageant of orchestras, electronic music, contemporary dance and workshops in honour of our closest star, the Sun. Free to enter and running continuously for 24 hours, First Light included attractions such as Gilles Peterson and Rosemary Lee. On the beach, locals and outsiders fused into a rosy heap under 30-degree temperatures.

Lowestoft is exceptional for being further east than anywhere else in Britain. It is unexceptional for being a coastal area facing economic hardship. It’s a town punctured by the decline of traditional industries (fishing and engineering) and an unreliable flow of tourists. Last year, 2475 claimed Jobseeker’s Allowance (compared with 1970 in 2017). Furthermore, research by End Child Poverty found that 7,058 children in the Lowestoft area are growing up in poverty – nearly a third of all children in the constituency. The town is also badgered by budget cuts. Sensing Change, who support locals with sight or hearing loss, are being dissolved due to lack of council funding. Last year, the council announced it would reduce free school transport to save money.

Lowestoft also suffers from a stubborn bad rep – “grimy” and “non-place” were some of the adjectives present during conversations about the town. Before I left, almost everyone wondered why I was going to a party in Lowestoft.

Hemingway Design, the team behind the festival, want to change this. They describe themselves as a “design agency with a social conscience” and have previously worked on coastal regeneration projects in Bognor Regis and Morecambe. Sophie Gwynne, communications manager, told me they hope to create a new mental image of the area, by showing off Lowestoft’s unique East Anglian light. “We take a truth and celebrate it,” Sophie says.

For the organisers, it’s not only tourists they wish to impress – it’s also the locals. Local residents may be unimpressed by an expensive beach party, when crucial services such as transport and healthcare are being squeezed. No one wants money squandered. Sceptics must become believers for the event to return. “We must win over the crowd,” one organiser tells me.

To achieve this, the festival programmed a host of local talent to perform. Talvin Singh, a Suffolk-based musician, opened the festival encompassed by a glimmering gold circle. Singh tapped his tabla furiously, pausing to adjust electronic sounds on his laptop. Next to the boundless horizon, it all felt profound. Singh reminded us of our setting and the innovation it harbours – he announced he has lived in Suffolk for six years, and that Brian Eno was born here. He also mused that at a dinner party in the capital, a guest told him earnestly, ‘I have an uncle in Sussex’. This is an area unsung and uncharted by Londoners. We had found a secret idyll.

Lying on the sand with our eyes closed, resonance was waved over our bodies by a light-footed instructor; a massage with sound waves. Away from the heat and crowds, it was a moment of meditation.

More natives followed. Hot on Singh’s heels were a flurry of local big bands, including First Light Ensemble, Horn Factory (‘East Anglia’s Premier Big Band’) and The Rabble Chorus (based near Ipswich). For the broad audience on the beach, it was feel-good, palatable programming. ‘The Lark Ascending’ was bellowed out with brass and strings by the Ensemble. Local talent was proudly on display.

The most engaging performances were site-specific, responding to the sounds and movement of the North Sea. In the Well-Being tent, a sound bath mimicked the ocean using a wah wah, tuning forks and an ocean drum. Lying on the sand with our eyes closed, resonance was waved over our bodies by a light-footed instructor; a massage with sound waves. Away from the heat and crowds, it was a moment of meditation.

Close by, the festival commissioned Circadian, a durational dance performance by Rosemary Lee. Each hour, a new dancer stepped into the sun-shaped circle on the sand. Accompanied by a harmonium and vocals, they ushered in the sea and sun with their body. The dancers, aged between eight and eighty, got older with each appearance. Time was being warped and hurried, each repetition gaining potency. It was a patient and powerful tribute to the Lowestoft sun, from an artist who was born and raised in the town.

It was a patient and powerful tribute to the Lowestoft sun, from an artist who was born and raised in the town.

For anyone intent on an all-nighter, DJs spanned the coast playing more contemporary sounds. With a waxing gibbous moon in the sky, Gilles Peterson opened his set with Kon’s edit of Le Stim’s ‘A Tribute to Mohammed Ali’, followed by Roy Ayers ‘Everybody Loves the Sunshine’. At the Aquarium, a music venue, Peterson played a second set of Brazilian funk and disco, before ramping up to sweaty breakbeats. The energy dipped when ‘A Tribute to Mohammed Ali’ was played for a second time; a signal to head elsewhere. At the Beach Bar, the Norwich-based Keep On Dancing and Our House kept dancers on their toes with techy, synth-driven house.

Inevitably, for an inaugural festival, there was room for improvement. The sound restraints at the Beach Bar meant the music never felt immersive. The young crowd repeatedly asked the DJs to turn the volume up. For a group of us, the Tides and Times short films were impossible to find. A sign saying ‘this way’ led to a locked office. And at the Sunlight Stage, the compare misjudged the tone with cheesy jokes. 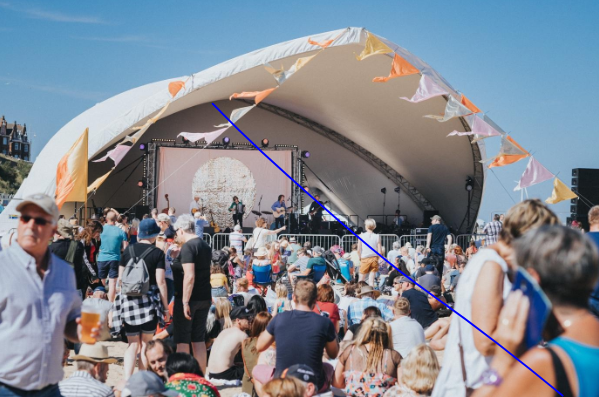 But these hiccups are not how the festival will be judged. This event was about regenerating Lowestoft – and the early signs are promising. Over the weekend, 96% of hotel rooms were booked up. 100 volunteer roles were filled by locals and local businesses networked on Jubilee Parade. The festival is still waiting on an official economic impact report, but early figures suggest it pumped £1.2 million into the local economy.

The public’s ‘mental image’ is hard to measure, but for the 10,000 strong crowd, Lowestoft was sun-drenched and entertaining. One visitor said she hadn’t seen crowds this big since the infamous Air Shows. Surely, visitors will be inclined to return.

On the promenade the next day, two beach hut owners told me, assuredly: “It was a success. The council take a rap, but on this occasion they’ve done well”; without a trace of scepticism. In front of them, on the beach, the Sunlight Stage was being taken apart. First Light Festival was fading from view. The sun, beaming above, was as bright as ever.

All images courtesy of @mromanovsky

One thought on “REGENERATING THE COAST THROUGH DANCE: A REVIEW OF FIRST LIGHT FESTIVAL”