A tall hill of turquoise, gendered cooing and guffawing, chainmail crop tops, and dance-fights with mops, performed to the sound of nineties nostalgia: Lizzy Shakespeare and Michelle Madsen, together known as Bait Theatre, effectively wield experimental drama to tear through the fanciful tropes of traditional fairy-tale femininity.

The duo refreshingly use physical movement and humour to retread the well-worn pitfalls of classic heterosexist romance: satirical fodder ranges from the works of Hans Christian Andersen to those of  Shakespeare, to earlier medieval fiction. Madsen attempts to emerge ethereally from a gown as if she’s the new-fangled Disney Princess on the buxom block, but gets trapped in the tight dressing; Shakespeare, playing the resident prince, tries to heroically rescue her, but finds the practical reality of a sprawling geography, shall we say, limiting as it takes some time to reach the tower, much less conquer the flirtatious meeting that comes later on.

The visual, energetic parody is played up through the contrasting attire of the performers

The visual, energetic parody is played up through the contrasting attire of the performers – one angular, the other curvy –  who also poke visceral fun at the range of stock characters, who underpin such biased fantasies: in a vignette, they transform into two monstrous hags, who look for all the world as if they’ve been haphazardly merged together. They form an actual uni-mound through the use of a cloth canopy. They croon, gurgle and even creepily survey the audience, only to cut abruptly to relatable, intimate talk. At one point, Madsen asks  Shakespeare, how one actually kisses ‘well.’ To which the latter replies: ‘keep it dry.’

The performance then cleverly exposes the gap between the social construction of gender roles, and the reality of the individual who inevitably strives to fulfil them. Either one falls into a sexual binary and painstakingly succeeds, or, like those women so often branded ‘witches’, opts out and is damned. Indeed, the tawdry fiction of a timeless patriarchy elusively – even hauntingly – floats through the farce. A massive metaphor, a wide rectangle of pale fabric forms the centrepiece of Bait Theatre’s distinctly post-modern piece: sometimes a dress, sometimes a swamp, always a clinging integral presence. The billowing white sheet in Shakespeare’s Othello symbolised the same social spectre: modern-day Shakespeare and Madsen then remove the perceived pretension of high verse while remaining true to the meaning. 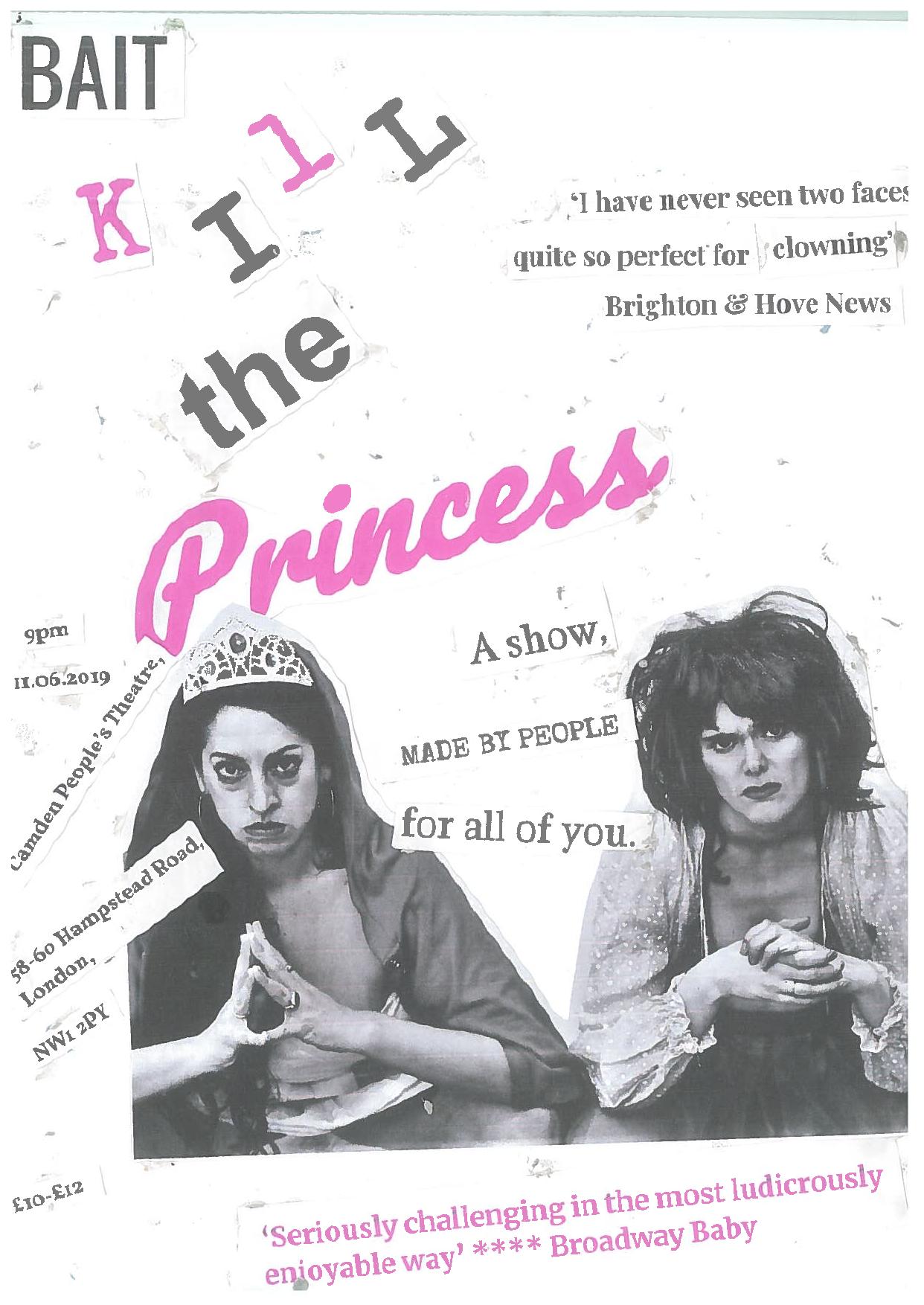 Furthermore, Bait’s more direct medium of expression is, at once, a universal language, which presents an uplifting, liberating truth. Their intuitive actions not only take the place of academic theory, but also release a poignant, vulnerable layer that flows over its sharp critique. The aforementioned cloth opens out, is passed over the hands of the audience, to ultimately champion touch as power. Such cultural narratives are tangible to the point of becoming burdensome, but Shakespeare and Madsen realise that in fully grasping them, one can make them lighter, and begin the process of crafting them anew.

Despite the absurdity, there’s contemporary style, pride and poignancy– discernible in the vibrant blazers and eye-popping props – which fizz in the consciousness, long after the play ends. Kill the Princess triumphantly confronts the controlling yet vacuous circus of patriarchy. Instead of simply intimating, it actively tears up the rulebook for male and female personae, and, also, just as importantly, celebrates the emerging personal space. In a merry fencing match, it seems our two performers are not so much against each other as in cahoots against a bigger, unseen enemy.

Despite the absurdity, there’s contemporary style, pride and poignancy

This is epitomised in the symbolic finale of the show, evocative of the play’s namesake. Having exposed the casual sexism that is endemic in the world of literary fairy tales, Shakespeare and Madsen inhabit the characters of executioners who decide their own subjective fate. As meditative as it is enthralling, Kill the Princess is a colourful catharsis of dogma that preserves all the fun of storytelling. You’re guaranteed to leave feeling happier in your own skin. After all, being on good terms with raw reality is the biggest rebellion of all.

Kill the Princess is heading to Edinburgh Fringe.

All images via Bait Theatre