For a few years now so-called leftists have been acting as cheerleaders for Syria’s President Assad. The apparent logic seems to go something like this: “American imperialism is abhorrent, so naturally we will embrace America’s enemy – Russia –  and by extension, Assad as our friends.” Let me be clear: in this case, the enemy of your enemy is not your friend. It is perfectly feasible to recognise that Russia is an imperialist power and serial abuser of human rights without legitimizing America’s terrible track record of imperialism, occupation and human rights abuses.

Let me also be clear that this article is not an attack on leftists. I consider myself very much a “lefty”, but my understanding of leftism is born of solidarity with ordinary people around the world who are engaged in a global struggle against oppression in all its forms. Being an apologist for Assad and cheerleading for Russia does not make you an authentic leftist. It certainly does not make you politically or intellectually superior. It just signals to everybody around you that you’re a prick.

Acquaintances of mine have jumped on the pro-Assad bandwagon claiming that American propaganda is behind the “fake news” about the Syrian revolution. “The Syrian people love Assad!” they claim, “America just wants to destabilize Syria for its own economic and geopolitical gain” These people are the worst.They are deliberately ignoring or worse, trying to silence, the voices of the hundreds of thousands of Syrian people who have lived under brutal repression for decades and who have risen up, unable to take any more. Of course, not every Syrian is anti-Assad (the majority certainly are), and yes, America is a global pain in the ass; responsible for interfering in democratic processes, imposing its hegemonic culture through harmful trade policies and rampantly abusing human rights, but we must remember that the oppression of the Syrian people is not a recent phenomenon.

Armchair socialists and pseudo-leftists seem to forget that Hafez Al-Assad (Bashir Al-Assad’s father) built and maintained a terrifying security-state long before some of them were born. A 1995 Human Rights report entitled ‘The Price of Dissent’ details the repression of unauthorized political groups (groups opposing the Assads are automatically unauthorized) and widespread torture of political prisoners in Syrian government prisons. Look up what he did in Hama in 1982:  The Syrian Human Rights Committee places the death toll resulting from that particular massacre at 40,000. The Assad family has been torturing and slaughtering Syrians for decades. This makes it even more infuriating when pro-Assad, pro-Russian, so-called leftists voice their factually-devoid opinions and share Russian propaganda and misinformation as if they are experts. Their complete lack of historical knowledge or awareness of the extent of the suffering of the ordinary Syrian people is apparent to all except their own blinkered cliques. I offered to introduce one of the above-mentioned acquaintances to some real-life Syrians (as opposed to the ones he only reads about in RT stories); Syrians who have fled the war having lost family members and limbs; ordinary Syrians who just want to finish their studies, hang out with friends, fall in love, find a job, start families, and be able to speak freely about politics.

I haven’t heard from that acquaintance since. He did not take me up on the offer. He had no interest in speaking to Syrian people. Perhaps the idea made him too uncomfortable. Perhaps he simply isn’t interested in opening himself up to a different version of the truth. But if your socialism, anarchism or other leftist “ism” is not about solidarity and standing side by side with ordinary people in the global  struggle against oppression, then who exactly is it for? What exactly does it represent? If your only interest is signaling the depths of your anti-Americanism to the rest of your social media network, you’re not a leftist, you’re a twat. A wolf in sheep’s clothing, in fact. Not only have you been manipulated, you’re actively trying to manipulate others into supporting Assad’s agenda.

Not only have you been manipulated, you’re actively trying to manipulate others into supporting Assad’s agenda.

Author and scholar Wendy Pearlman has written a fantastic book called ‘We Crossed a Bridge and it Trembled’, in which she interviews Syrian refugees who took part in the revolution and presents their narratives. The voices of these revolutionaries and “ordinary” Syrian people, paint a picture of a nation that could take no more of being scared of its own shadow. When, twenty nine years after the Hama massacre (which Syrians dare not discuss in public), security forces torture a boy to death for writing a pro-democracy message on a wall, you have to marvel at the resilience of the Syrian people who have survived such repression for so long. However, you also have to wonder at the callousness of the people who refuse to acknowledge that the Syrians have a very legitimate grievance against Assad, and are completely justified in rising up against him. What can never be justified is Assad’s extremely violent response to those initial peaceful protests, but in portraying Syrian’s who took to the street as “western stooges” you are doing exactly that.

Our failure to effectively demonstrate support for the Syrian people has shamed us. Every day Syrian heroes such as the White Helmets have been demonized by tinfoil hat-wearing “journalists” who write for conspiracy news sites and the Russian propaganda machine. So-called leftists who should know better have been lapping it up, abandoning any notion of critical thinking whilst distributing it to their friends as a means of attempting to demonstrate their intellectual edginess. The White Helmets have been proven again and again to be brave, selfless run-of-the-mill men who run into danger as others run away. The Russians and the Syrian forces know they can rely upon such bravery and so often bomb the same locations a second time in order maximise their kill. As White Helmets are acting as grassroots humanitarians and digging people out of the rubble, Russia and Assad’s forces are dropping bombs on them. 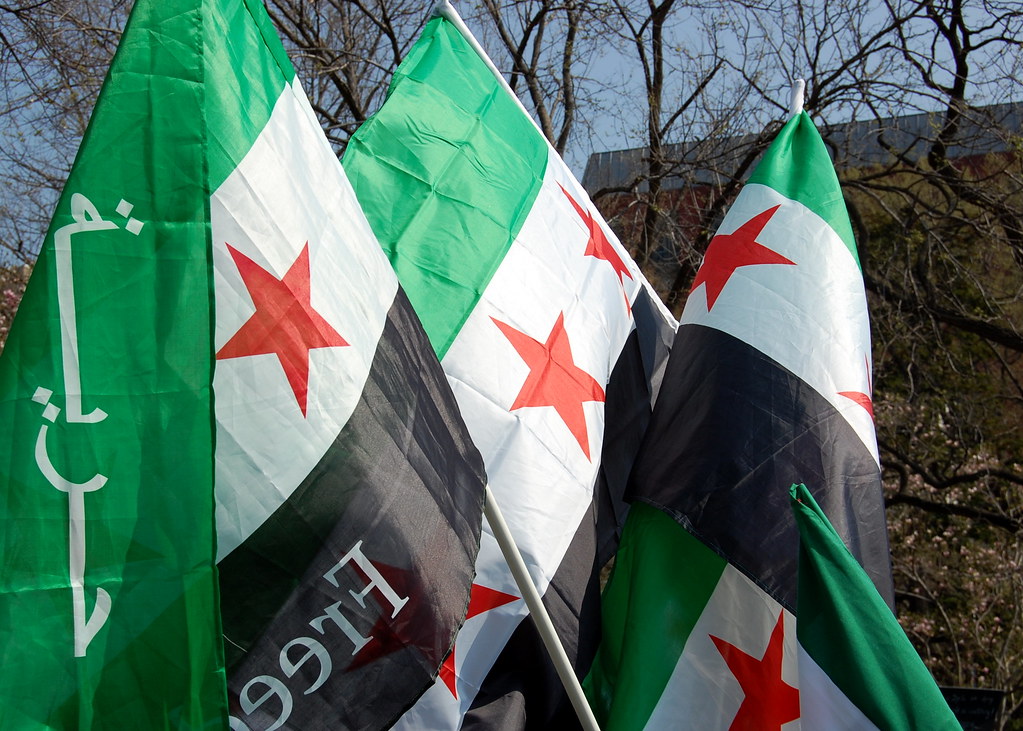 And then there are the chemical attacks by Assad’s forces. The fact that these  are forcefully denied by his legion of apologists, often written off as “false flag” events staged by the White Helmets using crisis actors is abhorrent, and has also been proved wrong time and again. The false-flag narrative demonstrates a complete lack of respect for the Syrians who are living under bombardment and daily fear of death simply for opposing the political establishment that has beaten, tortured and terrorized them for so long. In their European or American democracy-gilded safety, the people who espouse such nonsense are privileged beyond their recognition, yet from their position of safety and privilege they deny Syrians the legitimacy of their own pro-democracy movement. Perhaps these Russia groupies should move to Syria and sample the delights of what Assad has to offer themselves.

The Syrian Human Rights Committee’s website contains a multitude of reports detailing torture and repression, but also massacres, murders and other human rights abuses perpetrated by Syrian government and Russian forces. The Syrian group Lawyers and Doctors for Human Rights has released a report called ‘The Soul has Died‘ which brings to light the wide scale use of sexual torture and abuse against men and boys in Syrian government prisons. It’s harrowing reading indeed. Nobody knows exactly how many Syrians have been disappeared into government prisons, but in 2017, Amnesty International reported that over 17,000 people have died in Syrian government prisons since 2011 as a direct result of torture, abuse and terrible living conditions. That’s over 2,000 people a year – many of them, women.

To impose upon the Syrian people their warped understanding of political reality is the complete opposite of solidarity and the principles of leftism.

Most of those individuals who support Assad seem to retrieve their nonsense from Russia Today. Funny that Russia, currently complicit in multiple war crimes and brutal repression of the Syrian opposition, would not accurately report facts on the ground on its state-owned TV channel. Funnier still that those intellectually superior “leftists” who support Russia simply because is it the enemy of America, repeatedly fail to pick up on this. Russia. A country which commits a carnival of human rights abuses on a daily basis: violations of the freedom of assembly, expression, information and religion whilst suppressing political opposition. Russia, which stamps all over LGBTQ rights, women’s rights, minority rights, and the rights of the disabled. This is before we visit Putin’s support of Ramzan Kadyrov in Chechnya – a man famous for rounding up gay people, torturing and executing them, then denying they ever existed in Chechnya in the first place.

Russia, not content with terrorizing Russians and Syrians, has also recently sent mercenaries to Sudan to support President Omar Al-Bashir in brutally oppressing the popular uprising there which is demanding democracy. Where does it end? Russia is exactly as bad as America. There is a sadistic arrogance in those people who continue to defend Assad and share RT news clips (amongst others) demonizing and delegitimizing the Syrian opposition, denying the voices of the Syrian revolutionaries. These Assad supporters are sure they know best despite knowing nothing. To impose upon the Syrian people their warped understanding of political reality is the complete opposite of solidarity and the principles of leftism. This is especially evident when the sources of information on which they prop up their vile opinions are inherently pro-Russian, thus uncritically turning a blind eye to the multiple abuses and fervent imperialism currently advancing under Putin’s rule.

The enemy of my enemy is certainly no friend of mine.