A slightly misleading title. It should be RJ and R, but it just didn’t have the same ring.

So, what is RJ and R? Restorative Justice and Rehabilitation.

Why am I taking a closer look at these?

It sparked a lot of interest, which, in the main, was positive. The negative responses were all fairly similar and along the lines of Norway being culturally different from England. One comment asked me if a criminal from rural Norway was the same as a criminal from one of England’s inner-cities. Obviously not! However, the negative comments missed the point, especially as Norway modelled their design on a programme created and developed, like most criminal justice programmes, in America.

This, in my opinion, shows that cultural differences are not fully relevant and how the programmes that are facilitated can be based on differences. But the meat and veg of the programmes (for want of a better phrase) can be transferred anywhere. Rehabilitation, itself, is something that is for the individual. There is already much debate about rehabilitation.

So, I wanted to briefly cover Restorative Justice (RJ). What is RJ, and what are its benefits?

Let’s look at some facts.

One of the better advocates for RJ is an organisation called Why Me?, who champion the cause for better access for victims of crime to Restorative Justice all over England and Wales. They describe RJ as a voluntary process involving victims and offenders of crime, and trained facilitators who work with the victims and offenders to talk about what happened, who was affected, and how the harm can be repaired. It only transpires if both parties agree to take part; however, RJ can take place at any stage of the criminal justice process. Restorative justice has been shown to give significant benefits to victims of crime, who often have unanswered questions, and who can be excluded from the criminal justice process. It also helps reduce re-offending rates.

Why Me? was actually created by a victim of crime. Will Riley, who set up Why Me?, was burgled in March 2002 and wanted answers from Peter Woolf, the convicted prisoner who had been caught and was serving a sentence of three years for the crime. They met in Pentonville prison.

I was fortunate enough to meet and speak with Peter at an event in London just before Christmas. I was extremely impressed with what he has done since then. He is now an international businessman. We have also stayed in contact.

I told Peter that I was writing this piece and asked him for a direct quote about RJ. He said, “Restorative Justice [is] probably the most effective tool that the MoJ have at their disposal, yet it is the least used.” 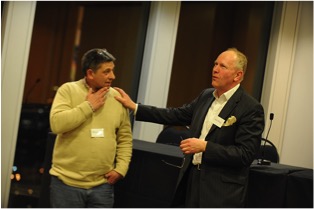 They are still talking!

Following the meeting between Peter and Will, both men changed. Peter turned his back on being a career criminal, which meant that many, many people did not become victims. Will Riley’s life changed, too – he was no longer frightened to open his front door. It also led to creation of Why Me? Will believes that talking is the way forward. The only way. The majority of victims don’t talk about what they have experienced, which can delay closure and even maintains their pain, suggests Will.

Featured image via the author: Creator of Why Me? Will Riley (left) with former heroin addict and prisoner Peter Woolf.