Donald Trump’s threats to ‘economically devastate’ Turkey if Kurdish forces are attacked is unlikely to stop an internal war that has been happening for years. Could this be Trump’s red line?

Having made the decision to pull out U.S. troops from Syria last month, Donald Trump tweeted that the U.S. ‘will devastate Turkey economically if they hit Kurds’ and ‘create a 20 mile safe zone’ in order to ensure security for Kurdish soldiers from Turkish attack. The reaction has been predictable; Mevlut Cavusoglu, Turkey’s foreign minister, stated that ‘you can get nowhere by threatening Turkey economically’ while a spokesperson for Turkish President Recep Tayyip Erdogan said that Turkey expects the U.S. to ‘honour our strategic partnership’. Erdogan has now agreed to Trump’s suggestions of creating a 20 mile safe-zone, however Turkey is still determined to hunt down the Kurdish fighters of the banned PKK in the YPG-controlled area of Syria. But just how far will the U.S. go to protect these Kurdish fighters?

The recent Kurdish history in the area is tragic, violent and full of broken promises.

The recent Kurdish history in the area is tragic, violent and full of broken promises. Kurds make up 18% of the Turkish population, 17% of the Iraqi population and about 10% of the Iranian population. All these groups have suffered oppression and violence. In 1919, the Kurds made a claim for an autonomous state at the Paris Peace Conference, but the subsequent 1923 Treaty of Lausanne made no effort to help. In northern Iraq, Saddam Hussein’s military carried out chemical attacks on the Kurdish homes, most notably the 1988 Halabja attack, killing over 5,000 directly and injuring many more. The area still suffers from high rates of cancer and birth defects. Despite an initial outcry, there was minimum response from the international community. 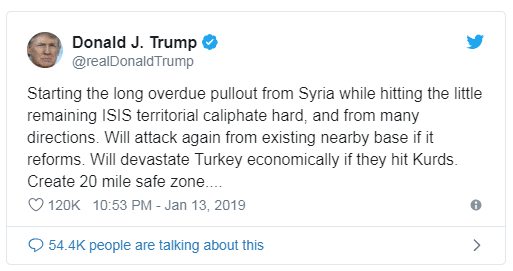 The Partiya Karkeren Kurdistan (PKK) has waged a war against the Turkish government since 1974 and, although initially Marxist-Leninist, seeks cultural autonomy for the Kurdish people but armed conflict continues to prevent a peaceful resolution. Part of this is due to the role Kurdish fighters have played in the Syrian war. The Democratic Union Party (PYD) is the Kurdish party established in Northern Syria. Its military wing, the People’s Protection Units (YPG), was given relinquished control of Kurdish cities by the Assad government, with Turkey accusing Assad of arming the Kurds while Turkey itself is suspected of arming Islamic State in response. Turkish soldiers and PKK/YPG militants have continued to clash in the region. The withdrawal of US soldiers, many of whom have fought alongside the Kurdish fighters, is seen as potentially opening up a new side to the conflict, which could result in heavy bloodshed. Turkish forces have already begun crossing into Northern Syria to carry out attacks on Kurdish camps while air attacks have bombed YPG bases.

So will Trump blink first? The strategic importance of Turkey in the region is vital to the EU, NATO and the war on terror but these are not excuses to ignore the abuse of human rights. All too often, such reasons override the security and privacy of the individual and the protection of democracy. States have a habit of making the most of such opportunities to pursue vendettas and extend state power, like France’s emergency powers or the draconian public security measures put into place in Spain.

As soon as the U.S. leaves the region, Turkey will take every chance available to hit back at Kurdish forces.

Alternatively, Trump may choose to ignore any violence carried out by Turkish forces, much in the way he has ignored the behaviour of Saudi Arabia In regards to the Yemen war and Jamal Khashoggi or Russian meddling in US elections. There may be a backlash in the US to such abandonment but Trump will be able to play to his base, claiming victory against Islamic State while wilfully declaring that Turkey is committing no acts of violence.

Calmer heads need to prevail. Turkey should be reminded about its duty to human rights and democracy if it ever wants to be truly trusted as an ally for Europe and for NATO. It should not be allowed to used its strategic positioning as a bargaining tool and protection against sanctions. The West, in the meantime, should be tougher in its actions. For all is posturing, Turkey does not want economic sanctions which would only serve to hurt the population and potentially drive more into the arms of the PKK. The Kurdish people need more support and reassurances from the West that they will be safe in the lands they occupy as long as they behave. That includes not provoking Turkish forces. A demonstration by all sides that they can control their violent impulses would be a great starting point towards a peaceful settlement. After all, how President Trump may react to such a red line being crossed is, as always, unpredictable.