The Rohingya crisis has saturated global media over the past two years, but since it was placed under the spotlight in 2016 I can’t help but think the international response it has initiated has been too little, and too late. All over the world we see grave injustices occurring and human rights abuses on mass scales. It only seems as though an international response is warranted, however, when these injustices reach some sort of pinnacle; often manifesting as the deaths of many thousands. We should be able to see the warning signs by now, and 2019 should be a year of working towards prevention, rather than mastering the art of tidying up the mess.

Genocides don’t just spring up out of nowhere unannounced. There is detailed academic literature, as well as policy recommendations and research projects which outline the early warning signs and common risk indicators of a genocide taking place, but these seeds seem to fall on stony ground when it comes to mobilising the international community into taking meaningful action. Towards the end of 2015, Burma came out on top of the Early Warning Project’s list of high risk countries for genocide, yet where was the response then? Two years earlier in 2013 the EU lifted its trade sanctions on Burma, which unsurprisingly received criticism from Human Rights organizations, with the head of Human Rights Watch Asia, Phil Robertson, calling it a “premature and regrettable” decision.

Having eased its own trade sanctions on Burma in 2012, the U.S. is yet to reimpose any effective sanctions on the country, having only blacklisted and placed trade sanctions on a handful of Burmese military commanders. There has been some degree of effort from Europe in response to the Rohingya crisis, as the EU are now considering reinstating trade sanctions against Burma. It has also placed travel restrictions on seven military officials, and the International Criminal Court (ICC) in The Hague has granted its chief prosecutor permission to carry out a preliminary investigation into the crimes against humanity that have been committed by the Burmese military. All of this does very little for the imminent health, security, political, food and shelter issues facing the refugees; with tens of thousands of lives already lost as a result of the genocide.

The recent decision of the ICC’s Pre-Trial Chamber in granting jurisdiction over the crime of deportation of the Rohingya population into Bangladesh highlights the challenges that international criminal law can face in achieving post-conflict justice. Burma is not a state-party of the ICC and therefore doesn’t fall under its jurisdiction, Bangladesh on the other hand is, and the court can therefore only prosecute on the grounds of deportation as it is a transborder crime. Despite having grounds for a case, Burma will be under absolutely no obligation to turn it’s military commanders in if the ICC is to issue their arrest warrants. So how far can retrospective justice go in making a real difference? Moreover, certain forms of retributive or punitive justice can even serve to jeopardise peace building efforts, as well as deter cooperation in processes of fair repatriation or restitution.

Currently, commentators have been fearing that Brazil’s indigenous populations may now also be facing a genocide under Bolsonaro’s rule. Indigenous activist Sonia Guajajara was quoted in The Guardian as saying:

“We are afraid of a new genocide against the indigenous population and we are not going to wait for it to happen. We will resist. We will defend our territories, and our lives.”

She is now urging the EU to place trade sanctions on Brazil before it becomes too late for the populations and minorities at risk under his far-right regime. Bolsonaro has been quoted in voicing several strong indicators that he intends to carry out a genocide; and has had this stance for many years. In 1998 he said:

“It’s a shame that the Brazilian cavalry hasn’t been as efficient as the Americans, who exterminated the Indians.”

“We are going to integrate them into society. Just like the army which did a great job of this, incorporating the Indians into the armed forces.”

Article 6 of the ICC’s Rome Statute details the legal definition of genocide as including “killing members of the group” and “forcibly transferring children of the group into another group”. Indeed, Raphael Lemkin who is considered to be the first scholar to seriously write about genocide in 1943 and conceptualised it as one of humanity’s worst crimes, refers explicitly to extermination of an oppressed group, and imposition of the dominant group’s culture. The international community should therefore be taking Bolsonaro’s threats seriously, and prepare for a genocide of indigenous Brazilian groups. Gujajara’s call for trade sanctions to be placed on Brazil could be a solid starting point. It would let Bolsonaro know that the international community aren’t turning a blind eye to his threats, as well as reassuring indigenous groups that international community are on their side. 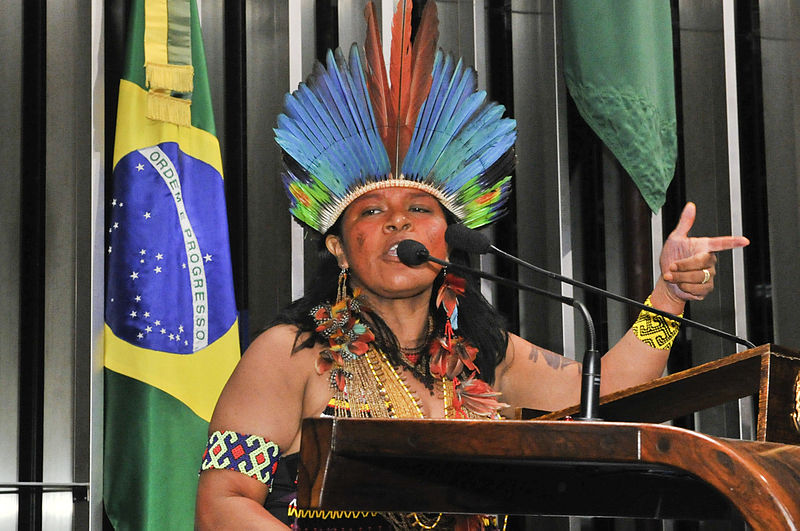 The U.S. has given over $389 million in humanitarian aid to the Rohingya crisis, the E.U. gave €41 million in 2018, and yearly running costs for the ICC are around €145 million (having only convicted 8 people since it’s inception in 2002). Without wanting to criticize these efforts too much, one wonders whether the money could have been better spent in prevention campaigns. Mainstream media outlets need to report on injustices before they reach a point of no return, and afford victims the attention they need and deserve. Social media platforms, in particular Facebook, have a social responsibility to act quickly in ensuring that it is not used as a tool for spreading hate speech and inciting violence in the way it was during the build up to the Rohingya genocide. Governments and corporations need to place serious sanctions and limit trade in abusive states in order to mount pressure.

A concerted effort is needed between the media, governments, and corporations in working to deter militaries and states from committing mass atrocities in the first place. If we can understand the root causes, and open our eyes to the signals that are right in front of us, the international community has no excuse not to step in before it is too late.