2018 was a landmark year for Mexico. July saw the election of Andres Manuel Lopez Obrador (popularly known as Amlo), whose party Morena won 53% of the popular vote. This landslide victory against the Partido Revolucionario Institucional (PRI), a centre-right party, has offered fresh hope for a country exhausted by corruption and fraud. The marginalisation of Mexico’s native communities, however, is in no way a resolved issue. Although Amlo’s social democratic agenda may seem to be an oasis in the desert for Mexico’s working classes, the fight for recognition, rights and justice amongst the indigenous  peoples of Mexico continues. Arguably the most notable group leading this movement is the Zapatista Army of National Liberation – the EZLN.

This movement has re-emerged as a journalistic hot topic in the past few weeks, owing much to Amlo’s inauguration back in December and the recent commemoration of 25 years since the first EZLN uprising.  So where did the movement come from, where are they now, and what does this mean for indigenous rights in Mexico? 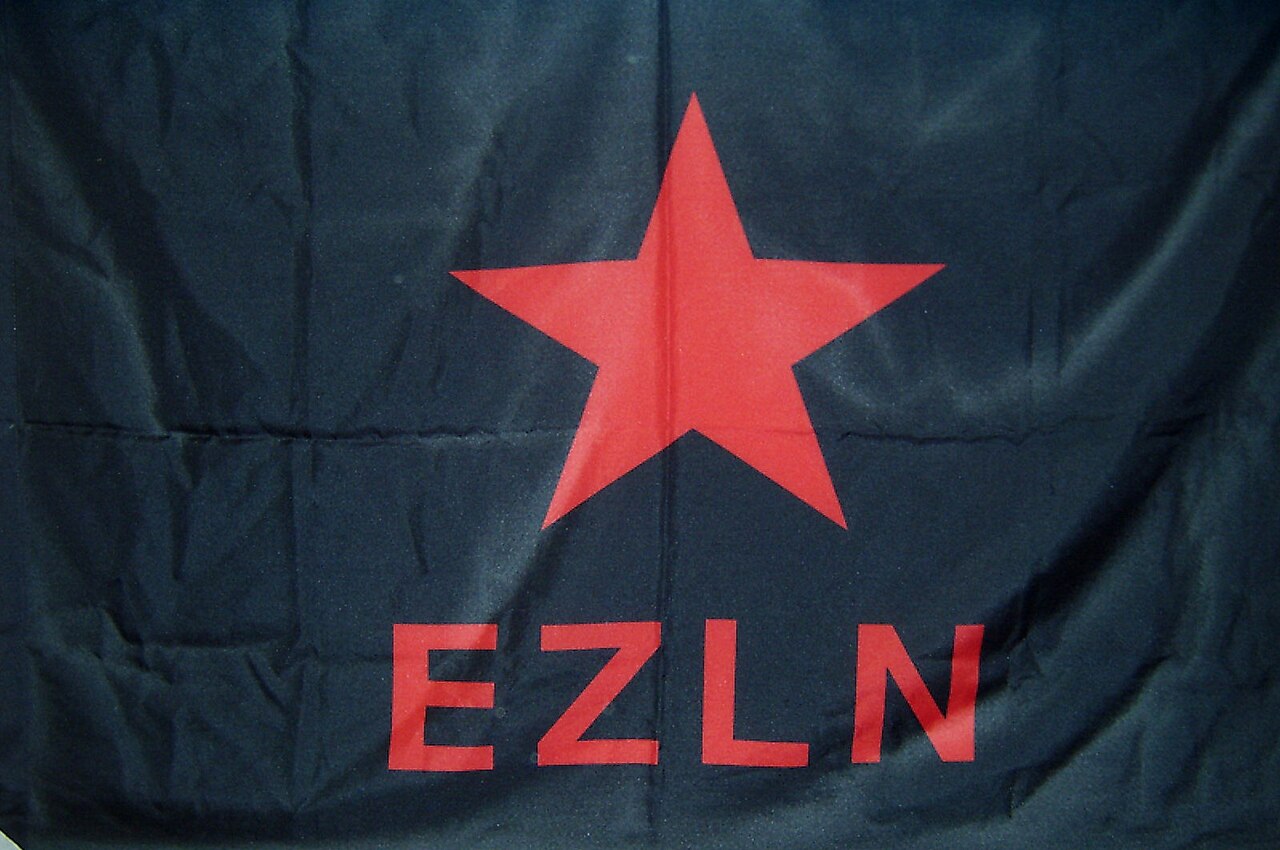 The 1st of January 1994 marked the EZLN’s entry onto the global political stage.  Calling for control over resources in the southern state of Chiapas, the anti-capitalist indigenous movement of the Zapatistas placed Mexico’s most marginalised populations back on the political agenda, something which had not been achieved since the Mexican Revolution. They demanded access to safe drinking water, improved education and employment opportunities, the rejection of corporate monopolies and false democracies and, ultimately, an end to the subjugation of indigenous people – a fight that was, and still is to this day, defined by their motto, “Liberty, Democracy and Justice”. The uprising coincided with the signing of the North American Free Trade Agreement (NAFTA), a trade deal that has been the cause of huge environmental destruction, increased income inequality, and the evaporation of basic workers’ rights. By 1996, multi-party engagement had succeeded in defining a series of principles concerning indigenous rights and greater autonomy – these became known as the San Andres Accords.

Flash-forward 25 years, and the role of the National Indigenous Congress, the political wing of the EZLN, has provided a platform for indigenous groups in Mexico to voice their grievances. It is important to note there is great diversity amongst Mexico’s native people – for example, there are 62 different indigenous languages currently spoken, according to the latest census by Mexico’s National Institute of Statistics and Geography. The indigenous movement may not be culturally or linguistically homogeneous, but there is unanimity to be found in their political demands.

The indigenous movement may not be culturally or linguistically homogeneous, but there is unanimity to be found in their political demands.

The EZLN has so far been successful in establishing and maintaining its own social model. The caracoles are the central assemblies for the autonomous regions established by the EZLN, created as part of the movement away from a ‘military organisation’ to a ‘local-level’ political group. In these autonomous municipalities, the self-government structure ensures the provision of health services, education, local transport and the likes, whilst also overseeing the implementation of workers’ rights. Production collectives in these zones ensure the sustainability of their own economies, and furthermore guarantee there to be no need for assistance from government funds. One aspect of this self-governing model is the dedication to preserving indigenous cultures, and furthering calls for resistance and female empowerment through artistic forms. Music and art can be seen throughout recent Zapatista events.

The CompARTE Festival is a yearly celebration of EZLN culture and the roots of their revolutionary history, presented through music, cinema and art. It is not uncommon to see children and families performing onstage, dressed in traditional Oaxaqueño clothing, and sporting the iconic Zapatista balaclavas, made famous by the movement’s original leader, Subcomandante Marcos. Back in March 2018, the Caracol de Morelia was host to the First International Gathering of Politics, Art, Sport, and Culture for Women in Struggle. Inviting “all rebellious women around the world”, the gathering saw over 5,000 self-identifying women join together for 3 days of workshops and talks, a further signal of the movements commitment to the advancement of women’s rights.

So where are they today?  The EZLN have been in the news declaring their opposition to the new Maya Railway, a megaproject proposed as part of Amlo’s new Presidency, which would see the destruction of many natural habitats for the benefit mostly of the tourism industry. Although Amlo’s inauguration saw him announce his rejection of Mexico’s neoliberalist failures, projects such as the Maya Railway, as well as Nestlé’s latest factory in the North of the country, seem to suggest he is not willing to cut ties with the centrist policies of the past. Certainly, one thing remains clear – the EZLN will continue to reject Mexico’s governments in line with their opposition to the limitations of the existing political structure, and the contradictions of projects that promise greater equality while continuing to appease neoliberal international markets and threaten basic human rights. It is true that Amlo has previously made reference to the fulfilment of the San Andres Accords under his premiership, however this would ultimately involve the undoing of previous constitutional reforms that have allowed the obliteration of natural resources and indigenous homelands. It seems extremely unlikely that the principles of San Andres will be high on the national agenda.

There is no doubt that the EZLN will continue advancing its critique of Mexico’s mainstream political limitations. The country’s latest General Election saw the first indigenous woman, Marichuy, run as an independent candidate, and whilst she didn’t make the final ballot, her campaign (supported by The National Indigenous Congress) initiated renewed talks about the state of indigenous rights, environmental rights and feminism across the country. This political movement clearly has no plans to back down, and the hypocrisy of Mexico’s latest megaprojects will only spur the growth of indigenous and environmental resistance.