Every year, UEA’s School of Literature, Drama and Creative Writing decide a season of plays, performed and produced by third year Drama Students. This year, they present Exodus, ‘two plays on power and conflict’; both works of dramatic literature set during the 20th century but inspired by legends of antiquity. John Steinbeck’s ‘The Grapes of Wrath’, and Bertolt Brecht’s ‘The Caucasian Chalk Circle’. Both plays look at mass departures of people, engendering the ever present plight of refugees having to leave their homes.

Steinbeck’s Pulitzer Prize-winning novel, often cited as one of the greatest ever written, comes to the stage in an adaptation by Tim Baker, originally commissioned by and performed at Clwyd Theatre Cymru. Steinbeck’s masterpiece chronicles the mass-migration of workers and their families from the dust bowl states to the Eden of California.

Brecht’s ‘The Caucasian Chalk Circle’ was originally performed in a student production at Carleton College, Minnesota, and remains one of Brecht’s best-loved works. Translated by Frank McGuinness, in a version originally commissioned and performed by Complicite and the National Theatre. This iconic play within a play opens to the end of the Second World War, and takes us into the world of a Chinese parable which hijacked by Brecht’s famously political storytelling. 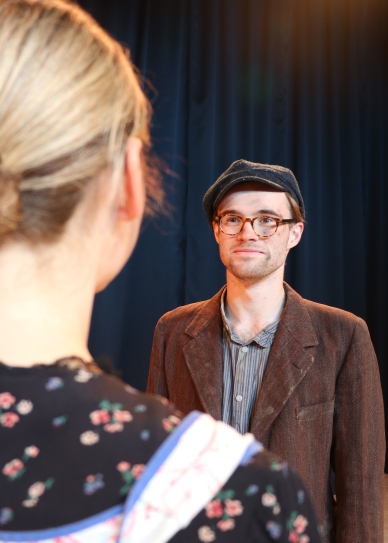 ‘The Grapes of Wrath’ by Liam Purshouse. Photo courtesy of UEA Drama.

Both productions will be performed in their celebrated studio theatre, which is being reconfigured into the round, offering audiences the chance to experience multiple perspectives on these increasingly relevant stories.

Anthony Frost, Head of Drama, has stated “the annual 3rd Year productions of the UEA Drama Department offer two things. The first is high quality drama, professionally directed with high production values. The second is a chance for a sneak peek at some future theatre makers – including future acting stars. Matt Smith (‘Doctor Who’, ‘The Crown’), Olivia Vinall (‘The Woman in White’), Greg James (‘BBC Radio 1’) and many others have appeared in our productions over the last forty years.”

The Caucasian Chalk Circle will be on Tuesday 4th and Friday 7th December, 7:30pm and Saturday 8th December at 2:00pm

All images courtesy of UEA Drama.