In a left wing social media group I am part of, a member recently asked whether anybody supported Antifa, before continuing on to state that he personally feels that “they sound like the fascists they are trying to rid the world of” and harming the potential of the left. This sentiment was unexpected given the online location. Why do the words “anarchist” and “Antifa” provoke such strong negative reactions?

The word “anarchist” is often thrown about by authoritarian politicians and the mainstream media in such a way as to conflate the individuals to whom they are referring with scenes of gratuitous carnage and wanton violence. Anarchy, they would have us believe, would see us all being forced out of our homes, sheltering from crazed gangs of masked young people, who in their unfathomable anger have not just seized the means of production, but burned it down – along with half of the country. We are encouraged to picture dark, menacing streets, full of shattered glass echoing with the feral howls of thugs as they parade through the streets in heavy boots under black and red banners.

Is a nation of humans sharing, cooperating and treating each other as equals really so scary?

It might come as a surprise to many, then, to learn that renowned French geographer Elisee Reclus (1830 – 1905) wrote in 1851 that “anarchy is the highest expression of order”. Peter Kropotkin, widely recognised as one of the earliest champions of anarchism, and a friend of Reclus, in 1902 wrote a book entitled Mutual Aid: A Factor in Evolution. The basic premise of Kropotkin’s thinking was that, in opposition to Darwin’s theory of survival of the fittest, evolution of humankind can only truly take place through mutual aid – you know, helping each other. Rules imposed by authoritarian governments will not encourage people to empathize and care for each other. The centralized nature of governmental power means that a society built upon the premise of mutual aid is not in its interest. A centralized authoritarian government prefers a society whereby people are distrusting of each other and unable to form a cohesive self-sufficient group with resources and agency.

Anarchism as a concept is often mistaken for a lawless collection of angry people coming together to smash things up and intimidate law abiding citizens. However, contrary to this misconception, anarchism is a dynamic movement of people who believe strongly in the principles of equality, economic sustainability and environmentalism. In actively opposing fascism and inequality, anarchists are striving for a truly egalitarian society where everybody is respected and nobody must live in fear. The spontaneous cooperation and mutual aid advocated by early anarchist thinkers forms the bedrock of anarchism. Is a nation of humans sharing, cooperating and treating each other as equals really so scary? Anarchist principles can be expressed in a myriad of ways. Some may join the black bloc (a loosely-affiliated collection of anarchist activists who engage in direct action, recognisably wearing all black at public demos), some may dedicate time to volunteering, still others may do other things or nothing at all – anarchists are not a homogenous group. 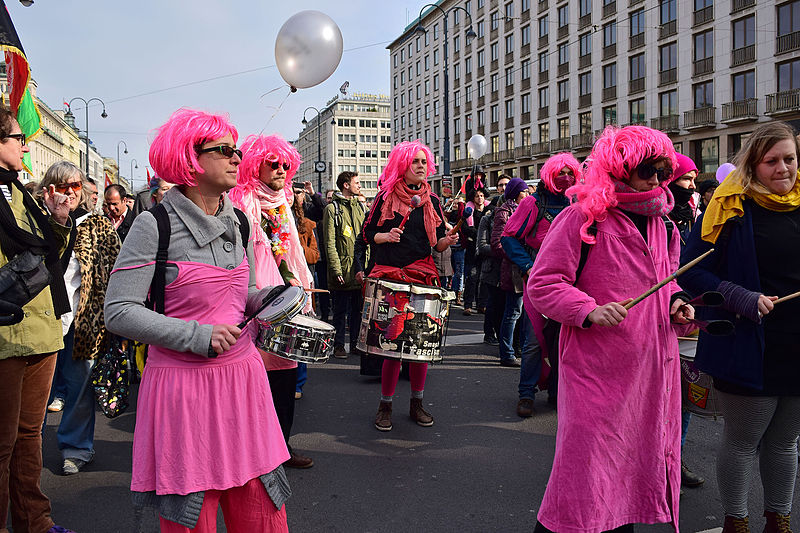 The problem is that Western societies are regressing and the current form of populism (and perhaps tribalism) is in direct conflict with the egalitarian principles of anarchism. Rather than an enlightened collective consciousness leading to decreasing reliance on centralized governments in favour of  increased interpersonal cooperation, we are seeing a resurgence of fascism and right wing sentiment. Italy, Poland and Hungary have elected fascist governments. America has elected Trump. Britain has incomprehensibly elected the Conservatives and opened the racialized can of worms that is Brexit. Right wing political parties across the West are becoming increasingly popular with voters who have become increasingly disenfranchised and callously stripped of their dignity by the political elite.

It is this frustration with the laissez-faire status-quo which has led to right wing, ethno-centric, white supremacist parties becoming so dangerous. They have an audience of people who have seen their jobs mechanized or outsourced, their dignity sullied, their communities left to rot by governments and corporations who have been more interested in profit than people. The right wing press, the securitization of migration, rising Islamophobia, capitalist policies and increasingly insular culture, combined with institutionalized racism have provided the catalyst for fascism to once again rear its ugly head. Free speech is of course a right that should be protected at all cost. The racist guy down the pub shouldn’t be arrested and imprisoned for chuntering away in such an offensive manner whilst propping up the bar, but he also shouldn’t be given a platform through which to manipulate an incredibly frustrated, desperate audience. For these reasons and due to the current political and economic climate, when Antifa protesters caused $100,000 of damage in Berkeley, resulting in the University of California cancelling its platform for Milo Yiannopoulos to talk, their actions should be viewed as a service to humanity.

There are also plenty of other people who engage in all of the above, but who are not anarchists.

Richard Spencer, president of the National Policy Institute, an American white supremacist think tank, was punched in the face by an Antifa protester during a live television interview in January 2017. Good. Spencer advocates the creation of a white ethno-state through peaceful ethnic cleansing. The only difference with Hitler is that the latter didn’t bother to pretend that it was going to be peaceful. Approximately six million Jews, among many other minorities, were murdered during the holocaust. An estimated thirty five percent of the American population is non-white. Spencer is essentially advocating the ethnic cleansing of many millions. Looking through a historical lense, would there be uproar if we discovered an anti-fascist member of the public had walked up to Hitler or Himmler and punched them in the face? No. They would be applauded and conferred hero status – rightly so. Members of the resistance during the Nazi era were not law abiding citizens – the laws were rotten and they recognized this, following their moral compass rather than abiding by fascist legislation and societal norms.

All of this leads us to apathy. Anarchists, whether they engage in political activism, volunteering, direct action or all of the above, are tenaciously standing up to a rotten system and saying “no way. Not now, not ever”. There are also plenty of other people who engage in all of the above, but who are not anarchists. All are driven by their desire to live in a peaceful egalitarian society. The anti-fascist community incorporates a wide range of people whether they are conscious of it or not. The elderly who knit hats and boots for refugee children; the volunteers young and old, who use their holiday time, and often risk arrest in assisting refugees in Europe where States have turned their back on them; those who campaign for recognition of Roma rights; volunteers in community centres; people who fundraise for, or regularly donate money to community initiatives; who send clothes to Calais, or Serbia, or Greece; who demonstrate solidarity with their fellow human beings however they can; those who tell the racist guy down the pub to shut the fuck up.

We cannot afford apathy. Neither can we prioritize being consistently law-abiding if the laws work in favour of the privileged few to the detriment of the many. Countering fascists and right wing narrative is not always going to be a comfortable experience, but do we look back through history and speak glowingly of those who did not oppose atrocities? No. Do we applaud or even understand their desire to not ‘rock the boat’? No. As Edmund Burke said “the only thing necessary for the triumph of evil is for good men to do nothing”. The far right is gaining in political strength. Remaining apathetic and taking no action is akin to supporting them. You cannot remain neutral without inadvertently siding with the oppressor. Natasha Lennard, member of Antifa sums it up perfectly by stating “you don’t have to fight neo-nazis in the street, but you should support those who do.” Europe didn’t wake up one day to the smell of bakeries and the sound of birdsong then without warning wake up the following day and discover the death of six million Jews had occurred during the night. The rise of fascism was a process. We should not all necessarily be anarchists, but we should all, in some way, be Antifa: consistently opposing fascism, racism, xenophobia and hate wherever we encounter it.

4 thoughts on “ON ANARCHY, ANTIFA, AND APATHY”