May 2017 saw Palestinian political prisoners in Israeli detention uniting to take part in a hunger strike. Every Friday during the strike, street protests were held in solidarity and various other events took place under the motto ‘salt and water’. Some of my friends from Nablus, viewing horses as inextricable from ‘non-horsey’ aspects of life (their lives are absorbed by riding horses; taking selfies with horses; racing horses; breeding horses; bathing horses…) demonstrated solidarity non-violently by riding their horses into Nablus city centre, carrying Palestinian flags and calling for solidarity with the prisoners.

A few days later I arrived at the stables we all frequented, ready to team up with my usual co-instructor, Mohammed – quiet, gentle and patient, the kids love him and he is a pleasure to teach with – only Mohammed wasn’t there. Israeli soldiers had sought him out in the refugee camp where he lives. He had been arrested and was being kept in Israeli administrative detention, a form of detention whereby the Israeli authorities can decide to imprison a Palestinian without charge or trial for up to six months. Such disregard for the human rights of Palestinians is obscene enough, but compounding this, the Israeli authorities can (and do) extend the detention by six month periods indefinitely. According to Addameer, of 5,900 Palestinian political prisoners held by Israeli authorities, 442 are in administrative detention. Not only are these individuals held without trial or definitive release date, they “must endure severe restrictions to their right to education, rights to communicate with families and receive visits and right to medical treatment”. Israel often waits until the end of the initial period of detention before announcing that another six months in detention has been ordered. This is psychologically agonizing.

( Mohammed, by a friend of the author )

I remember the reaction of complete disbelief of one of Mohammed’s best friends when we were discussing the sudden arrest and detention of his daily companion. “Mohammed is peaceful” he said, shaking his head.

Mohammed has since been released after being detained for six months, and to the British public he would like to say “British people should support Palestinians and speak out against Israel’s treatment of us because when Palestinians speak out, Israel stamps all over our human rights and imprisons us.” Criticizing Israel’s treatment of Mohammed should be a no-brainer. A State should be held to account for basically kidnapping young people and detaining them without charge.

Arbitrary arrest and detention is only one manifestation of Israel’s all-pervasive, brutal and humiliating occupation of Palestine. It has continued to build settlements in the West Bank in contravention of international law and UN Resolutions, imprisoned children, and murdered approximately 150 peaceful protestors, injuring approximately 16,000 more in Gaza during the Great March of Return alone, drawing condemnation from the UN and international community as a whole. These examples are just the tip of an illegal, repressive iceberg.

So when Mohammed asks us to speak up from our positions of relative privilege and safety, of course we all should. Why wouldn’t we? Well, perhaps some of us are becoming increasingly concerned that we will be accused of anti-semitism.

Spoiler alert: I’m not a member of the labour party or devout follower of Corbyn – I do not view him as some kind of demi-god. But, I do vehemently support his stance on the working definition of anti-semitism drafted by the International Holocaust Remembrance Alliance. The guidelines for this definition include examples of what should be considered anti-semitism, one example being: ‘holding Jews collectively responsible for the State of Israel’. Given that Israel has just passed the Nation State Law which defines itself as a State belonging exclusively to Jewish people, drawing attention to the fact that Israel’s self-identification as a Jewish State can cause difficulty in deciding whether language or behaviour is anti-semitic is a legitimately justifiable thing. Israel is populated not only by Jews, but by Arab Muslims and Christians. The exclusion of these citizens from the definition of statehood is reprehensible enough, but to present all Israelis as being homogenous in politics and opinion is ridiculous, simplistic and trivializes the notion of anti-semitism. Israel and Israel alone is conflating Judaism with the illegal occupation of Palestine and all of the violence it entails. We should challenge this as well as challenging Israel’s treatment of Palestinians, as a matter of genuinely trying to combat anti-semitism whilst also fighting for Palestinian statehood.

My friend Saaed was arrested at the age of seventeen and detained until he was twenty. His last few weeks in prison coincided with the prisoner’s hunger strike. By the time Saeed was released he was too weak to walk. When exiting the prison gates he nearly collapsed – his family, who initially didn’t recognize him, had to carry him to their car. Saeed had been coerced, as a minor, into signing a document written entirely in Hebrew – a language he doesn’t understand. This document was a confession, detailing crimes he did not commit. As the soldiers drove him to the prison from which he was too be released, emaciated, Saeed says that he was too weak to lift his arms due to the weight of the handcuffs. The two soldiers driving deliberately took him on a detour, where they stopped at a shop and ate junk food in front of him. For weeks after his release, Saeed could only ingest small amounts of liquid food;  his internal organs simply couldn’t process solid food anymore.

I asked Saeed last year what he would tell people from the international community if he could. His response was to ask that we fund the Palestinian cause. We should stand with Palestinian political prisoners and fight for their release, which, he believes is the most effective road to peace. He said: “when I got out of prison I was both happy and sad. I was happy because I was finally free, but I was sad because I had to leave my brothers on the inside. These people I have shared food with. I have shared good and bad situations with them. I just want them to be released. The release of the political prisoners is the best way to peace. Without their release there will be no peace.” 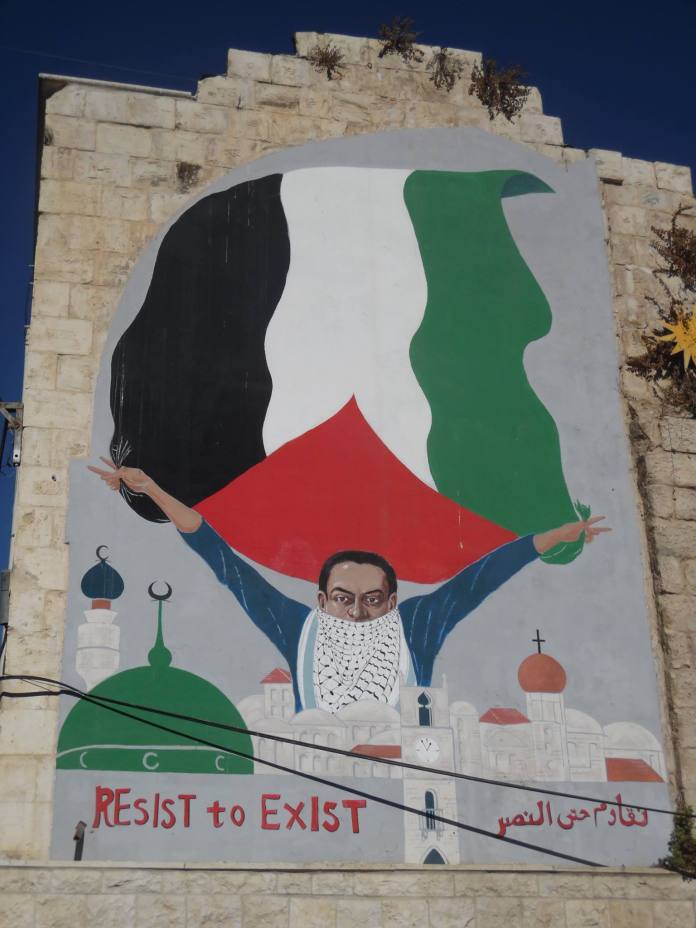 Jewish Voice for Peace is one of over forty Jewish groups which oppose the IHRA definition of anti-semitism, arguing that ‘at times like this, it is more important than ever to distinguish between the hostility to or prejudice against Jews on the one hand and legitimate critiques of Israeli policies and system of injustice on the other.’  With so many Jewish groups being confident that this definition will do nothing to prevent anti-semitism and everything to undermine the struggle for Palestinian (and global) rights, as global citizens we should remain defiant in the face of Israel’s bullying tactics and demand an end to the occupation.

At a time when BDS activists are being pursued across national borders, Israel has been found to be tampering in the domestic political processes of the UK and increasing numbers of internationals are being deported or banned from Palestine by Israeli authorities, we need to increase the pressure. The Knesset recently approved a draft law which will criminalize the filming of IOF soldiers whilst they are working, with imprisonment for up to five years being stipulated. Organizations such as B’Tselem and the International Solidarity Movement have been instrumental in bearing witness to all manner of violent crimes committed by Israeli soldiers against Palestinian civilians, both children and adults. By cracking down on our ability to bear witness, by screaming anti-semite at people who are taking a stand for the rights of Palestinians, Israel’s government is pursuing the objective of being able to act with impunity.

The examples above of my friend’s experiences are not exceptional. They are exceptional people, yes – their resilience and unfaltering humanity is incredible – but the treatment they have suffered whilst engaging in their right to resist an illegal occupation is far from extraordinary. Just as we should not tolerate anti-semitism, Islamophobia or any kind of racism in society, so too we should not tolerate State policies which harm millions of people and strangle an entire nation. As Israel is strengthening its control over Palestine, so too is it pursuing those who criticize it, decrying them as militants or anti-semites. The conflation of Jews with Israel in the IHRA definition is not conducive to progressive politics or respect for human rights, and as such it is redundant. We cannot value the rights of one whilst condoning the derision of rights of another. Human rights are, and should always remain universal.

All images by the author, except where noted