Cooped up in an office in Uganda, inputting into what seemed like never-ending columns of cells in Excel spreadsheets, I would often ruminate about other jobs I could be doing which at that moment would be relatively more fulfilling and life affirming. One of the jobs I kept ending back at was as a member of one of the security teams responsible for the protection of the last northern white rhinoceroses: Sudan, Najin and her daughter Fatu. While in reality I knew my poor grasp of Swahili and lack of weapons training made it unlikely I’d ever work with the rangers responsible for the security of these magnificent animals residing within Ol Pejeta Conservancy in Kenya, I became interested in their plight, following their turbulent existence ever since.

Thanks to a belief rife in countries such as China or Vietnam that their horns possess numerous medicinal uses, the northern white has been hunted to the edge of extinction. While once a common sight across the African plains, by 2015 excessive and continuous poaching had reduced their numbers to just one (known) male, Sudan, and the females mentioned above. In a hasty effort by conservationists to ensure these giants of the African wilderness didn’t meet the same fate as the rest of their species, numerous steps were taken to ensure their survival. Radio transmitters were placed on the animals to enable round the clock surveillance of their movements; undercover rangers were dispatched into local communities to identify potential poaching operations, shutting them down before they had a chance to strike; and a team of armed rangers was attached to each rhino, following them as they peacefully roamed the bush. Things looked initially optimistic as global publicity surrounding these animals increased, seeming less likely that anyone would be foolish enough to try and take their lives.

In a hasty effort by conservationists to ensure these giants of the African wilderness didn’t meet the same fate as the rest of their species, numerous steps were taken to ensure their survival

Alas, it was nature rather than humans that dealt the decisive blow to this dwindling species. In March of this year, 45 year old Sudan passed away due to a long-term leg infection dashing the hopes that he could father the next generation of his species. Unable to give Fatu more sisters – and hopefully brothers – to grow up with and begin the gradual repopulation of northern whites, it became apparent future generations would know only of the northern white through pictures and videos. In all honesty, it wasn’t looking good before the death of Sudan either: he had a low sperm count, and Najin, alongside serious reproductive issues, had such weak hind legs she was unable to support the 2 tonne male needed to do the deed.

Enter science. Dr. Thomas Hildebrandt and co. from the Leibniz Institute for Zoo and Wildlife Research had for some time been watching the gradual demise of the northern white and devised a solution more traditionally reserved for humans. The team went to great lengths to collect sperm samples from the last remaining males as they gradually disappeared, hoping that future technological development could facilitate the artificial production of more of these majestic beasts. That time is now, as the team hope to ,  an upcoming pilot experiment,  use a sample of northern white sperm to fertilise a southern white rhino egg in vitro, before moving to use precious northern white eggs. If successful, the research team would produce the world’s first test-tube northern white rhino, a feat they aim to complete within the next three years. Using surrogate mothers in Europe, Asia and the US, within a decade or two we could bear witness to significant rejuvenation of an almost lost species. They also hope to use stem cells extracted from the remaining rhinos to create more sperm and egg cells, potentially ensuring the mighty northern white rhino is firmly brought back from the brink. 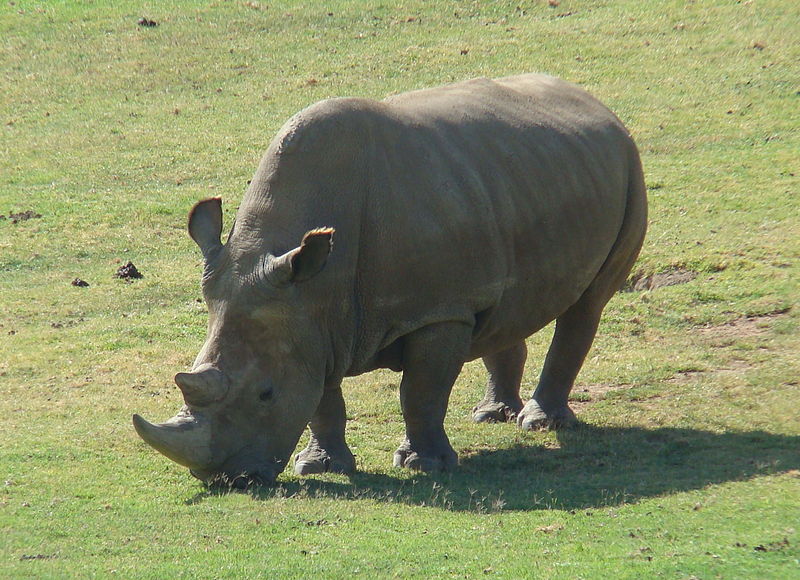 There is however a tinge of irony to this story. While the separation of animals and humans, the de-animalisation of our own species, has led to this situation, it’s the use of human technology that is responsible for their rescue. While we place ourselves on a pedestal as the thinking, rational animal, we build a barrier, a divide that allows for blind destruction based on an assumption of superiority. When we’ve gone too far, we respond through the application of distinctly human cultural and social behaviours upon these animals, in an attempt to save them. If a transmitter is good enough for both human and rhino, should we see them as different? and why wait until they’re nearly extinct to employ it? We must recognise that it is our (apparent) intelligence, or our identification of it, that has led us to do the most stupid things. No other animal destroys its own environment to this extent to survive. The rest of the animal kingdom manages to live in harmony with its surroundings, as we maim it and nearly every other species. Forgive my misanthropic tone but surely if a distinction is necessary, it should result in acknowledging that our species is the weaker, stupid creature, not the entirety of a perfectly balanced and symbiotic global fauna.

I digress. To end on a positive note, let us celebrate that this may not be the end of the northern white, as there seems to be real hope that modern science can save this species and reproduce a once flourishing population of beautiful, gentle giants of the African savannah. But as we do so, let’s also remember how we ended up here, and that if we want other species that we coexist with not to rely on us for their future survival, we need to fundamentally change the way we look at animals and to stop needlessly killing them in the first place.