You would be forgiven for thinking that any England football fan who decides to follow their team to the 2018 FIFA World Cup must be either crazy or a hooligan looking for trouble. UK Police Chiefs, senior MPs, sports experts, and – most perniciously – the British press, have all issued sombre pronouncements warning of the dangers awaiting any English football fan foolish enough to brave the shady hinterland of Mother Russia.

After the violence between English and Russian hooligans at the European Championships in 2016, many believed that travelling fans would face a similar fate in Russia, only without the protection of a neutral police force. Some even warned that Russian police would be unlikely to intervene in cases of violence against English supporters.

I would estimate that around half of the supporters cheering on England in their opening match against Tunisia, were in fact Russian.

The admonitions grew ever more bizarre as the opening of the world cup drew closer. Fans were warned not to display English flags in case they offended Russian nationalist sensibilities. A Tory MP cautioned that fans could be targeted in reprisal attacks after the Kremlin was accused of poisoning former spy Sergei Skripal. The government warned fans to be careful of groups of women and children who beg, likely an alternate wording for the standard “Danger! Gypsies” warning. The Daily Mail even warned that English fans are in danger from Russia’s 70,000 strong population of bears.

The warnings seem to have been heeded though, with a notable absence of great numbers of England supporters visible in the host cities. Only around 30,000 tickets were allocated to England, fewer than half the number that attended the 2014 World Cup in Brazil. Both China and the United States have more fans attending the tournament than England, regardless of neither nation qualifying.

The absurdity of the dire proclamations of doom became abundantly clear when England fans arrived in Volgograd, the city which they were pretty much warned not to enter (because of its historic significance in WWII and cultural significance to the nation-building of Russia). Across the city, Russian football fans were decked out in English and British flags, wearing Premier League team jerseys, chanting along, with faces painted in red and white. An English fan would be hard put to walk through the city without being stopped at least once by a jubilant local wanting to welcome them to Russia. I would estimate that around half of the supporters cheering on England in their opening match against Tunisia, were in fact Russian. 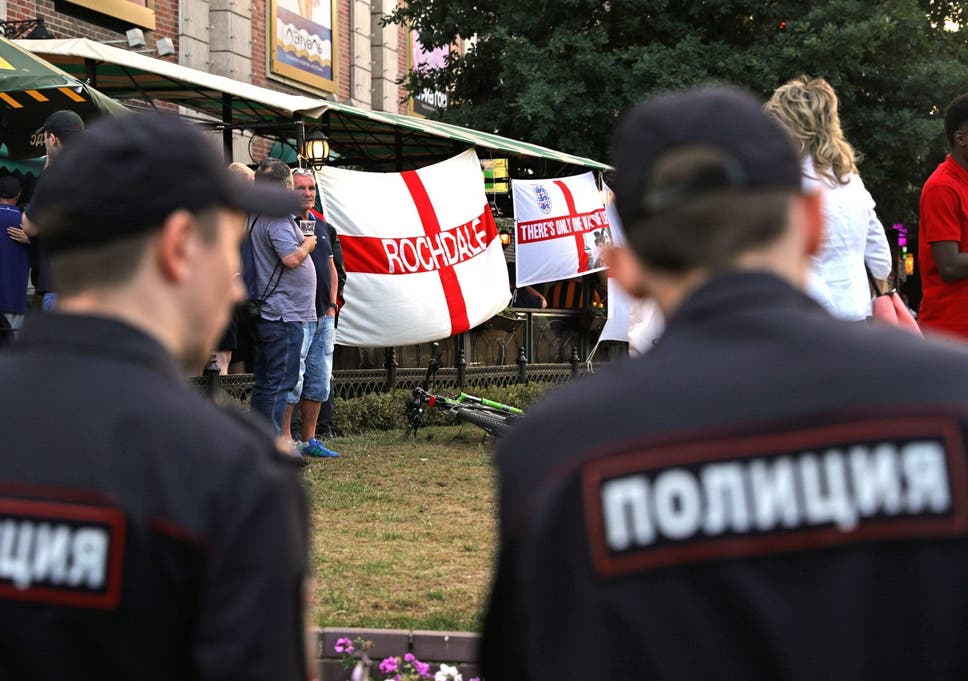 Russia, like England, is a nostalgic country that is often looking backwards to its past, and obsesses over the Second World War even more than the English do as a vital part of its national identity. A combination of the Russia’s shared history fighting against Nazi Germany, its consumption of British culture and media, and even films like Green Street and Football Factory mean that many Russian football fans are actually quite fond of Ing-er-land.

The scare-tactics of the British media and establishment have fallen only a little short of Cold War style propaganda against the Russian establishment. The warm reception that many have received since arriving in the country, however, demonstrates that the Russian government and the Russian people are not one and the same, no matter how convenient an enemy this would make for Westminster.

The unscrupulous reporting and comments from senior officials have misrepresented and othered ordinary Russian people to the British public. This has resulted in many England fans foregoing the World Cup and missing out on the bizarre circus that is the FIFA World Cup.

But this doesn’t mean that Russia and its World Cup are without significant problems. Russia is putting on a show, and the world is watching. Orders from the very top mean that far-right elements of football fans seem to have been stood down to allow the competition to pass smoothly and without incident. Host cities have been ‘cleaned up’, with undesirable persons removed for the duration of the tournament. Local authorities have even increased the budget for euthanizing stray dogs in host cities to £100 million this year.

this doesn’t mean that Russia and its World Cup are without significant problems. Russia is putting on a show, and the world is watching.

There is also a real danger posed to LGBTQIA* individuals, particularly gay men, by violent homophobes in the country. Even with the police and far-right being ordered to be on their best behaviour, the threat of spontaneous violence from members of the public is still very possible. Two gay men supporting France were attacked and hospitalised in St. Petersburg before the tournament had even begun. Outwardly displaying LGBTQIA* colours or symbols away from the fan zone areas of host cities would be very risky even with the tournament on.

Whilst the World Cup has allowed some breathing space for local activists and organisations to voice concerns over LGBTQIA* and ethnic minority issues, it remains to be seen how far reaching the inevitable crackdown will be when the tournament finishes and the eyes of the world turn elsewhere. Russia’s human rights record is abysmal, and its controversial anti-NGO and anti-LGBTQIA* laws restrict freedom of expression and liberty for many people in the country. Even so, there are many who are resisting. There are countless ordinary Russians who are open to the world, and want to use this FIFA World Cup as an opportunity to welcome people of every religion, ethnicity, gender and sexual orientation from 31 different nations… yes, even from England.