In recent weeks, Damien Hirst’s anatomical sculpture Hymn (1999–2005) has been installed outside of my university, Norwich University of the Arts (NUA), where it will be on show until July 29th as part of his exhibition at Houghton Hall. Although the term ‘hymn’ refers to a form of praise, there are a number of reasons why neither Damien Hirst nor the institutions choosing to associate with his work should be praised.

The first of these reasons is Hirst’s involvement in the continued gentrification of the art world. The 20ft bronze sculpture is a striking symbol of the firm grasp of capital, that grows ever tighter around the art and cultural spheres. This can also be seen in much of Hirst’s other work, including the infamous piece The Physical Impossibility of Death in the Mind of Someone Living (1991) from his series, “Natural History” (1991–2014). This piece, which famously victimised 17 sharks and 668 fish (a tiny proportion of the estimated 913,450 total creatures used in Hirst’s installations according to Artnet), is not only morally questionable and ethically unsustainable, but also lunges into gentrification. 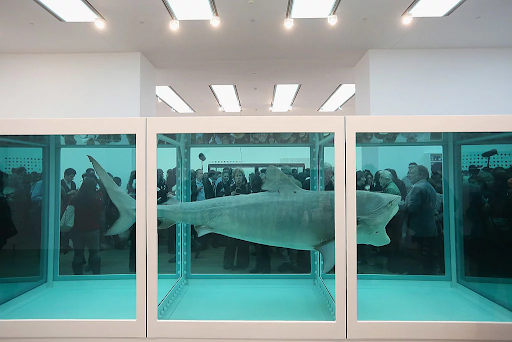 Damien Hirst, The Physical Impossibility of Death in the Mind of Someone Living (1991). Credit: Oli Scarff

The cultural prestige of works like this is used to remake hierarchies and continue a neoliberal culture of competitive individual gain, contributing to rising market profits through culture-led gentrification. This work’s subject, the shark, is symbolic of the unemotional overarching power system of capital accumulation in which the artwork exists. The price tags that works like this and Hymn carry form part of Hirst’s attempt to mock this system, but this project undercuts itself by simultaneously feeding the inequality of ‘high end’ art. Can this damaging irony really be justified in the name of art? Or should Hirst’s ‘in market’ functioning be condemned as a mere extension of elitist illusion?

Hirst’s artwork does present an interesting and academic commentary of both modern and historical systems. However, it is void of the rebellious resilience that art work, and the practices and interactions that surround it, exemplify. As artists, we all face the pressure to become economically viable, but as independent artists and researchers it is our responsibility to act ‘rebelliously’ and disallow our work to solely exist through that system. Hirst’s sharks and statues, with their monumental pricetags, fail to address the question of responsibility of association – the question of which works, institutions and individuals get exposure and support (and for what reasons). He may be mocking the system, but he does so with complete disregard for the individual artists (and animals) that are subject to the lethal workings of consumer capitalism.

the pride the university takes in associating with Hirst is disheartening

The other major problem with the arrival of Hymn, is that NUA students were not consulted on the decision to install the work in their space. Their acceptance and compliance were simply presumed; an arrogant paternalism rings through this decision. The press release for the installation quotes Professor Neil Powell, Pro-Vice Chancellor (Academic) at NUA:

“Temporary public art is a way to give wider access to creativity, imagination and the unexpected. It gives pause for thought, a reason for a conversation or can present a challenge to established ideas of a place or context. […] The work also captures that spark of creativity and magnifies it on an architectural scale. Like much of Hirst’s work, it is audacious and provocative. What better place to locate such a work at NUA where student artists are exploring their creative ideas?”

As one of those student artists, that’s not quite how it feels. Instead of capturing that ‘spark of creativity’, it feels as though the work is mocking the students that are studying under an institution happy to associate with the wealthiest living artist of our day. The fact that NUA students are paying £9,000 a year to study there, and then have to fund their artwork, exhibitions and projects on top of that is enough of a kick in the teeth. The installation of work by one of the world’s richest artists only adds insult to injury, showing an ostentatious disregard for art students’ financial struggles. A number of students I have spoken to have openly expressed their desire to disassociate with the work completely as well as the artist himself. Many artworks, research essays and projects within the university space directly contradict much of what Hirst exemplifies. NUA have confirmed that no university money was spent directly on the project and that it was funded by Hirst’s organisations. However, the pride the university takes in associating with Hirst is disheartening to those of us working against the model of high-end, hyper-commercialised art.

Creativity is a blanket term for so much that can be progressive and involving. The creative sphere has the opportunity to bring people together in spaces separated from the machinations of the market, an ever decreasing space. The work NUA students do in service of the important social function should not be mocked by their own institution, least of all by installing a Hymn to commercialism outside their studios.