The NFL’s anthem controversy has been rumbling on for a long time. It started in 2016 with San Francisco 49ers Quarterback Colin Kaepernick deciding to  sit for the national anthem during preseason games. This eventually changed to kneeling after a conversation with former soldier and player Nate Boyer about he best way to protest during the anthem. This carried on for the rest of the season with players from across the league joining him in his protest against the treatment of people of color in the United States. At the end of the season, Kaepernick was released from his contract with the 49ers as they looked to rebuild the franchise afresh.

The protests continued into last season, with Kaepernick unemployed despite the clear need for a player of his caliber for some teams in the NFL. This then led to the starting of a collusion case against the NFL and the team owners, as he believed there was a concerted effort to keep him out the game during all the time he planned to protest. This was something that was sadly support when the Seattle Seahawks asked him if he would continue to protest before a visit for a workout this off season. Kaepernick’s decision to state that he would continue with the protests led to a sudden cancellation of his workout by the team.

there was a concerted effort to keep him out the game during all the time he planned to protest.

Intersecting at  various points in this long running saga is Donald Trump. During his run to be president, when the protests first started, the then nominee remarked that Kaepernick should ‘find another country that works for him’. This remarkably unsubtle remark by Trump turned out to be the first of many regarding the protests. After winning the nomination and the overall presidency, he went on to make the now infamous comment ‘Get that Son of a Bitch off the field right now!’ At this point, only a handful of players had continued to sit or kneel, but it ignited other players who up until now had not been involved in the protests. This included scenes where entire teams didn’t come out for the anthem in Week 3 of the season, such as the Seahawks and the Steelers, or whole teams kneeling during the anthem, such as the Dallas Cowboys and their owner Jerry Jones. This, again, dissipated towards the end of the season after various concessions had been agreed on between the NFL and a Players coalition on what the league should do to fight social injustices.

The agreement lasted until this week, when, out of the blue, the owners of all 32 teams and the league announced a new policy that will see players either have to sit in the locker room during the anthem or stand for it. This entirely unexpected shift in policy, that potentially was never voted on by the owners despite claims of an unanimous vote, forces players to make the choice between using their right to protest- as enshrined in the constitution – during the anthem and receive fines and other disciplinary issues, or to take it to the locker room, which forces them out of the public eye. This news was of course met with great glee by the Trump administration, with Vice President Pence tweeting ‘#winning’ at the breaking of the news and the President himself stating:

This dog whistle racist remark sadly didn’t come as much of a shock once the news broke. The NFL has, for all intents and purposes, thrown its players under the bus in an attempt to appease a man who will always have contempt for the League. Before he started getting involved in politics, he attempted to buy a team in the NFL, only to be refused. His response, in typical child-like tantrum style, was to start a brand new league called the USFL. The USFL crashed and burned after he took the NFL to court and won a whopping three whole dollars. This left the USFL 160 million dollars in debt and it eventually closed its doors in 1986, after only 4 years of existence. This festering hatred for the League which, combined with his inherent racism, has led to his current attacks.

The policy change gives Trump and his motley bunch of supporters an example of a win that they never should have received. The NFL is losing viewers across the board for an array of reasons but it has clung to the idea that the anthem controversy is the culprit. What it doesn’t realise is that the players, many of which are people of colour, are now likely to revolt against the League, in games where there are bound to be protests, or in the next collective bargaining agreement, where they will fight to have this policy overturned. In the meantime, players that do protest will face fines. However, some owners have publicly thought back against its decision, with Chris Johnson, the current CEO of the New York Jets, already saying he’ll pay the fines of the players who choose the protest outside the locker room. This is the type of leadership that is needed from teams who have abandoned their players in an attempt to grab the cash of Trump’s followers. 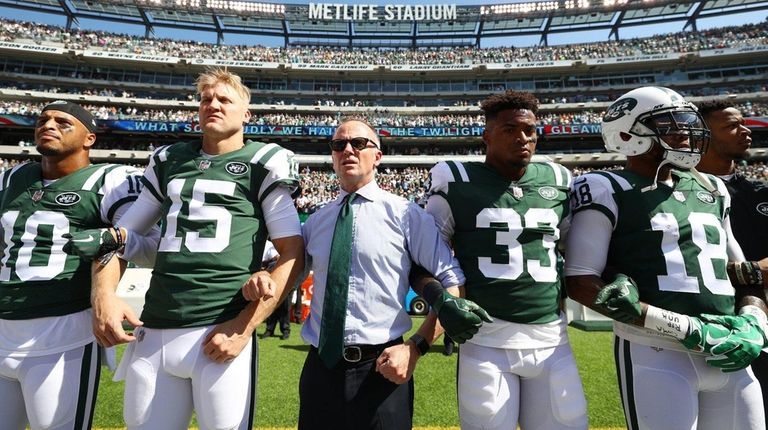 And what of Kaepernick? He is still suing the League in what looks like a foregone conclusion and has been joined by Eric Reid, former teammate at the 49ers and protester He has also become an Ambassador of Conscience for Amnesty International for his work in teaching young People of Colour their rights with the Know Your Rights campaign as well as continuing to fight against social injustices. He has been approached by teams to play as a back-up to many quarterbacks in the league he could, arguably, outplay with ease, only to be let down when it comes to continued questions about his anthem protests.

This saga will continue unfolding as the weeks, months and years go by Whilst the League, and the 32 all white,all male owners continue to push back in the reach for more viewers and their dollars and try and placate a racist President who continues to make comments that continue to divide the country further. I respect every player who decides to take a stand in order to help their communities. This is something much bigger than the NFL and the teams within it. It cuts deeper than loyalty to one team. These players are continuing the fight for a better world and they should be commended for doing so. They should not remain silent but look to become louder than ever.

One thought on “KNEELING IS NO LONGER A CHOICE”