SAVORR, a non-profit arts organisation based in Norwich, recently started a series of events called SAVORR Social, to showcase interesting new ideas and concepts in local art. These events aim to inclusively welcome a number of groups into a socially and artistically fertile space, a space that harbours diverse ideas, conversations and considerations. On Thursday April 19th I attended the ‘NUA Open ANTIsocial Social’, the fifth event in the series, which showcased experimental work from four Norwich University of the Arts (NUA) students.

The most interesting thing about SAVORR social is the way it reaches into different kinds of artistic spaces. In the classic ‘white cube’ gallery setting, works live and die in the space and very little conversation or exploration is encouraged. A more social structure lends itself to people staying for a longer period of time and interacting more with those around them. I spoke to Henry Jackson Newcomb, a member of SAVORR’s organising committee, about the many different strands of the SAVORR Social programme. As well as directly presenting artworks, the events reach into, investigate and comment upon a number of spheres around art, such as events planning and exhibition presentation, which simultaneously carries the project forward and spurs the conversational continuation of themes. The Socials are almost a curation of interactions instead of physical ‘artworks’, focusing not on the individual artists or their work but on the notion of extended interaction itself.

Using the social nature of the event, the work was able to gauge people’s reactions to a space swamped with digital media

ANTIsocial Social was presented by four NUA students selected through open call: Maddie Exton, Bethany Freer, Emma Hampson and Colleen O’Brien. The event’s aim was to investigate the ways in which socialising has developed in the digital age. On the night of the Social, Handlebar, downstairs at The Bicycle Shop, was filled with screens and projections, of Netflix shows and a live internal and online stream, reflecting the audience back at themselves as they reacted to the work.

Overall the effect of this was somewhat bewildering, making it difficult to register if the artists were aiming to make ironic commentary regarding internet culture or to sing its praises. In fact I think the Social performed a third function, beyond merely offering a perspective or argument: investigation. Using the social nature of the event, the work was able to gauge people’s reactions to a space swamped with digital media, actively conducting research into the way in which people interact with technology and with each other when confronted with this exaggeration of their everyday media environment. 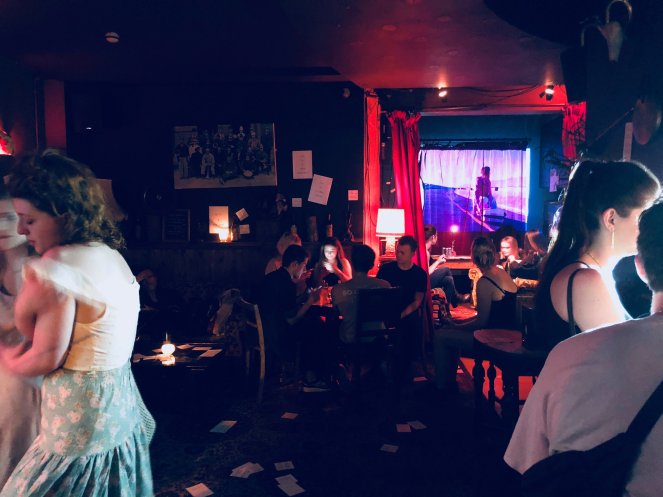 Handlebar was open as usual during the event, furthering the reach of the the Social and its investigation, allowing even those who may not have heard about the event in advance to get involved and immerse themselves in the conversations. This almost never happens in traditional gallery spaces, with their set presumptions and models of interaction. At the ANTIsocial Social, I felt that people had the chance to relax more and interact with (or consume) the work at their own pace.

The next SAVORR Social, programmed by originalprojects, will be taking place on Thursday 10th May SAVORR Social in Great Yarmouth. Hopefully, transport will be organised to encourage as many participants as possible. Extending the project into different areas of the county is crucially important to its investigatory, exploratory, conversational ambitions, making it more more accessible to new artists, viewers and ideas.