It is a time of extraordinary potential for change in UK Higher Education. Labour’s promise to end tuition fees has defied the critics and united many behind Corbyn’s political project. But what will the implications for universities be if this comes to pass? And what can we do to leverage this progress? In this series, the Norwich Radical and Bright Green are bringing together perspectives from across the sector to explore these questions.

I have heard many students fervently oppose this idea, arguing that ‘too many’ people would come to study in the UK if there were no university fees, and that anyway international student fees make a welcome contribution to the economy. Of course there should always be some criteria for people to get into universities, but these can assess their academic skills and interests rather than their economic status. Yes, international students pay £4.8 billion in tuition fees annually, but they contribute much more to the economy through other expenditures – a total of £25.8 billion each year. More to the point though, this economic debate is reductive and frustrating; in pursuing it the principle of what higher education is and should be gets lost. All students, home and international, have a cultural and social value that far exceeds economic value. 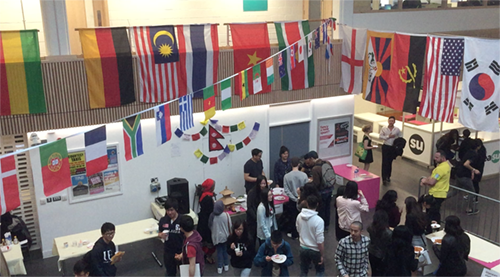 UEA has an active international student community – but many other potential students from abroad are excluded by exorbitant fees. Credit: UEA SU

I love being a part of a university with an international student population and I am an avid believer that universities are international institutions. There should not be any borders placed on knowledge and learning. An international community makes going to university a much richer and more valuable experience for everyone. When I was about to start my undergrad at UEA, I had visions of university being a strong community with lots of mass political action, diversity and commitment to the sharing and development of knowledge. My naive idealism was short lived. I now see the many strong divisions in the student population, along political, racial, gender-based, and socio-economic lines. A lot of students don’t seem to actively care about things that do not directly affect them.

I worry that years of policies aimed to marketise education and turn students into consumers has rubbed off on some of us. During the strike action, for every pro-strike conversation I had, I had two more conversations with students who were angry and unhappy because they weren’t ‘getting their money’s worth.’ They were annoyed that they had paid for a service that was not going to be provided. It makes sense – we have been made into mere consumers, and lecturers are providing a service that we pay for. Higher education is becoming little more than an investment, which breeds elitist and individualistic structures and attitudes. Students are stressed out about getting return on their investment, as well as stressed out about debt. Universities are stressed out too because they need good performance and high satisfaction ratings to maintain their ranking in the eyes of the government, the public and the Teaching Excellence Framework.

Tuition fees are not the source of all our challenges, but they are the cause of many. With the abolition of tuition fees for international students as well as home students, our universities could start to really live up to their potential as places of international understanding and solidarity. Campuses would develop into more vibrant, supportive, diverse, cohesive and less individualistic communities. Higher education would look at students as human beings with intrinsic value, regardless of where we are from, not just as pots of money.

We have the power to shape higher education to be what we want. Universities and young people shape culture, develop societal values, start political movements. Campuses are places of debate, of new ideas, of increasing what we know about the world we live in. A university is a whole community consisting of everyone from students to lecturers to cleaners and cooks. Universities are local and they are global. We must not forget any of that. Let’s build on this staff-student solidarity and continue to campaign against the marketisation of higher education, standing shoulder-to-shoulder with international students at every opportunity.

If you’d be interested in contributing to this article series, contact either thenorwichradical@gmail.com or front-desk@bright-green.org with an article pitch.