There was some apprehension as a Chinese ‘Heavenly Palace’ fell to Earth last week. The 8.5 tonne Tiangong-1 space station, adrift since China’s space agency lost connection with it two years ago, made an ‘uncontrolled’ re-entry into Earth’s atmosphere early on Easter Monday.

Fortunately there was never much cause for concern, the European Space Agency calculating the chances of being hit by debris as ’10 million times smaller than the yearly chance of being hit by lightning’. Most of the station burned up on contact with Earth’s atmosphere and the remaining fragments plunged into the South Pacific. But the episode had a eerie resonance, symbolising something of the West’s prevailing perception of China as an enigmatic, technologically advanced state, glowing with – rather like its wayward satellite – a nebulous sense of danger.

Like its grand economic projects, most notably the panoramic Belt and Road initiative, China’s increasingly ambitious space programme is viewed with suspicion, particularly by the United States, which forbids NASA from working with Chinese scientists and has blocked their participation with the International Space Station (ISS).

Tiangong-1’s untidy descent stirred memories of the last Chinese space incident just over 10 years ago, when China fired missiles on one of its own weather satellites, signalling the country’s capacity to engage in orbital warfare and producing hundreds of thousands of new pieces of space debris that continue to endanger the world’s satellite infrastructure.

China now occupies the role once played by the Soviet Union when futurists and science fiction writers imagine the Earth’s political tensions extending into a new era of interplanetary conflict. Stephen Baxter’s epic 2013 bestseller Proxima, for example, depicts a 22nd century world in which the United Nations and China struggle for supremacy over the Solar System’s resources, with China dominating the system from Mars and beyond, its space colonists gliding effortlessly from planet to planet in elegant space junks propelled by sunlight captured by solar sails thousands of miles wide.

As technology radically reduces the cost of space exploration sci-fi visions of a race to colonise Earth’s neighbouring planets and moons seems increasingly tangible. A new space race is beginning, this time with competitors that include private corporations as well as national space agencies, and with a crewed mission to Mars, rather than the Moon, as the big prize.

After decades of drift NASA has regained its focus by concentrating its resources on a Mars mission. A space station in permanent orbit around the Moon will serve as a ‘Deep Space Gateway’ for exploration of the Solar System, beginning with a trip to Mars within the next 20 years. Elon Musk’s SpaceX corporation aspires to get there considerably sooner, sometime in the 2020s, before beginning a settlement project. Another Silicon Valley venture, Planetary Resources, backed by Google’s Larry Page and Eric Schmidt, aims to mine near-Earth asteroids for rare minerals and metals. China’s stated medium-term objectives for its space programme are somewhat less spectacular, at first sight seeming to retread old ground: to put a space station in orbit round the Earth and astronauts back on the Moon.

To some extent that relative caution reflects China’s late embrace of space exploration. Mao Zedong, a great admirer of the Soviet space programme, lamenting that his impoverished country was incapable of launching a potato into space, devised an ambitious project to put ‘taikonauts’ in on the Moon back in the 1970s, but it was redirected by his pragmatic successor Deng Xiaoping into the development of more immediately useful telecommunications technologies.

An increasingly prosperous China only felt able to turn its attention back to space exploration in the 1990s, when it committed to the long-term objective of building a space station, an ambition now close to fulfilment.

China’s programme in inspired by a confusion of motives blending intellectual adventure, national prestige, and hard economic and military self-interest.

Last month’s National People’s Congress made headlines for consolidating Xi Jingping’s political supremacy by lifting the two-term limit on the Chinese presidency, but it also quietly paved the way for the implementation of the next phase of the country’s space programme, approving the next generation ‘Long March’ rockets capable of putting the modules that will form China’s space station – the Tiangong-2 – into orbit within the next five years.

If the project is successful, China will move from the margins to the centre of Earth-orbit space research. With the ISS scheduled for retirement by 2025 the Russian, European and Japanese space agencies have indicated interest in working with China to develop the Tiangong over the coming decades.

But China’s most ambitious plans are focused on the Moon. Five years ago China sent the Jade Rabbit rover to the lunar surface, remarkably, the first to explore Earth’s neighbour for nearly half a century. And later this year the Chang’e-5 mission will break new ground by putting the first rover on the far side of the Moon, where it will explore the South Pole-Aitken Basin, a region of great scientific interest because of the presence of unknown quantities of water ice left millions of years ago by comets. As well as collecting ice and mineral samples the Chang’e-5 will test the effects of lunar gravity on insects, plants and other terrestrial organisms.

The expedition is envisaged as the first step in a decades-long project to establish a lunar base. Astronauts will once again set foot on the Moon, and over the course of several missions construct a station in the south pole region, where the presence of both sunlight and (in the shadow of craters and mountains) ice promise the material conditions for a sustainable station. 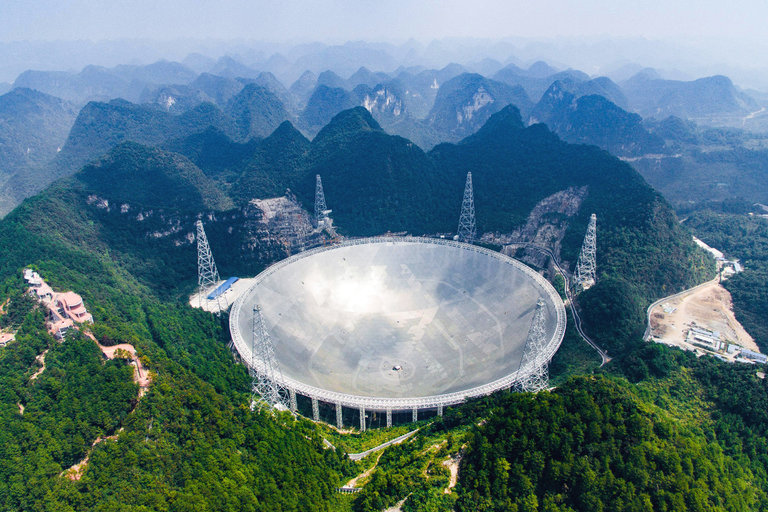 ( FAST, in Guizhou Province via NYT )

China’s space programme has other intriguing strands. One, acknowledging the trust lost by the 2007 satellite adventure, is a space debris tracking system able to track the 100 million known pieces of space junk, many smaller than a centimetre wide. Another is the construction of the world’s largest telescope, a dish with a collecting area of 2.1 million square feet, equivalent to 450 basketball courts, set deep in the Guizhou mountains. Twice as sensitive as the world’s next-biggest single-dish radio telescope, the facility will help physicists map the formation of the universe and look out for radio signals from extraterrestrial civilisations. China has also begun testing a new range of satellites with communication keys encrypted by quantum-level computers, which may pioneer a new generation of hack-proof communications networks.

As with other space-faring nations, China’s programme in inspired by a confusion of motives blending intellectual adventure, national prestige, and hard economic and military self-interest.

Though unlikely to get to Mars first, with no plans for crewed missions til around the middle of the century, China’s focus on establishing a permanent presence in Earth orbit and on the Moon promises to construct a solid infrastructure for future exploration. Indeed the country’s massive investment in artificial intelligence, machine learning and robotics may allow China to move unobtrusively past its space rival rather sooner than later, in the same quiet, methodical manner as it has become an economic superpower.

China was mapping the heavens as long ago as the Bronze Age. A thousand years ago its soldiers put the first ‘rockets’ in the sky when they launched fire arrows powered by gunpowder. Now it seems China may be on its way to lead the exploration of the skies its astronomers gazed at so many centuries ago.