These words were written in 1949 by Žarko Jovanović, a Romani Holocaust survivor, Yugoslav Partisan fighter, and activist. They were put to a traditional melody, and adopted as the Romani Anthem in 1971.

It bears none of the hallmarks of an anthem as conceived in the traditional sense by European nation-states. It is not a hymn or an opera. It’s melody is plaintive, unstructured, reckless even. It does not conceive of a homeland, real or imagined, nor does it call for the unification of a people in a national sense. Instead the lyrics speak of the freedom of the road, freedom from persecution, and the need for unity of Romani people across the world. Amongst many other things, it is fundamentally a protest song.

On the 8th April,  International Roma Day, this anthem will be played all across Europe and beyond as part of cultural celebrations, conferences, commemorations and parties. For one day, Europe will celebrate Roma culture. Though this may often be in a sterile, concentrated form – where the cultures of an entire race have to be boiled down to a day’s entertainment – it is important nonetheless. Recognition and celebration of Romani culture is important. Without these type of events, where non-Roma are invited in to experience Romani culture, people will remain ignorant. It is very easy for society to fear and marginalize an outsider Romani culture which is considered closed-off. The unknown lends itself to myth, misrepresentation and misunderstanding – no more so than in the case of Roma – and without being given genuine Romani experiences, people have no reason to see the richness of Romani cultures beyond the stereotypes.

By cultural wealth, I don’t just mean the abstract value that all culture is granted by virtue of its status as cultural. I mean that Roma have supplied Europe with some of its greatest artistic works for centuries, and have contributed inordinately to the cultural heritage of Europe considering the relatively small number of Romani people.

Without these type of events, where non-Roma are invited in to experience Romani culture, people will remain ignorant.

The Bohémien style came from artists and creators in French Romani neighbourhoods in the 19th century. From Spain came Flamenco. Gypsy Jazz from France, Manele from Romania. Romani music has influenced Europe’s classical composers such as Liszt, Brahms, Weber, Sarasate, Ernst, Ravel. One of the greatest artists of the 20th century, Pablo Picasso, was of Romani descent, and in the age of the silver screen: Charlie Chaplin, Rita Hayworth, Yul Brynner, Michael Caine and Bob Hoskins are all of Romani origin.

Roma have contributed so much because of the sheer variety of Romani cultures across Europe which have interacted differently with the majority culture. From Wales to Turkey – and the tapestry of customs, cuisines, music, art, religions and languages in between – International Roma Day should celebrate this richness of Romani cultures. 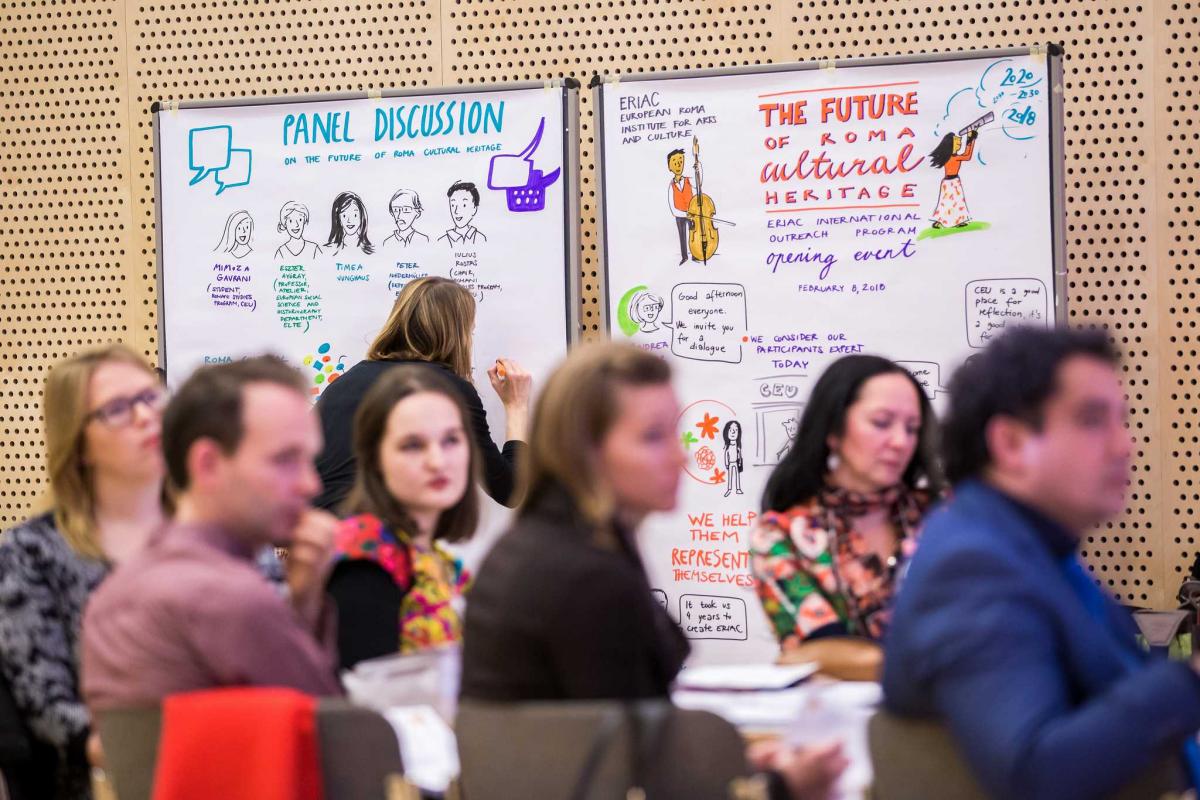 (“The Future of Roma Cultural Heritage,” the first event in Budapest held by the European Roma Institute of Arts and Culture (ERIAC) — image via CEU)

Aside from being a cultural celebration, the day is also intended to raise civil awareness and solidarity around the issues faced by Roma across the world. Nearly thirty years after the first Roma Day, you are unlikely to find any big parades, flag draped streets or concerts in your local area. Many Roma, if not most, will be unaware of the day’s passing.

The day is a victim of its modernity and its elitist nature, being created by middle class civil society. Like Conservative economics, the trickle down approach does not work any better for grassroots organising than it does for wealth distribution. Though it is important to mark the day, and use it to build bridges with the majority population, we must acknowledge its shortcomings.

80% of Roma in Europe are at risk of severe material poverty,  and 82% are not even aware of organisations which offer support to victims of discrimination according to the EU Fundamental Rights Agency. International Roma Day is not something that most will have the luxury of spending time or money on, when they are mostly concentrated on surviving.

The number of Irish citizens in Europe is about half this number, yet St. Patrick’s Day parades are annually splashed across Europe’s capitals and beyond.

Aside from abject poverty, many would simply not take the risk of drawing undue attention to themselves. Between routine forced evictions, abuse by social services and medical staff, police brutality, and mob violence from the majority population, it’s just not worth opening themselves up to the possibility of additional persecution.

Numbering over 12 million people, the Roma are Europe’s largest ethnic minority, with a larger population than many European countries. The number of Irish citizens in Europe is about half this number, yet St. Patrick’s Day parades are annually splashed across Europe’s capitals and beyond.  Perhaps a celebration for a people no longer persecuted.

Of course, parades are nice. Parties are nice. Exhibitions, speeches, festivals, and concerts are nice. But we need protests, not parades. We need public disobedience in the face of illegal forced evictions. Anti-Fascist action when the far-right attack our neighbourhoods. We need public outrage, and calls for resignation when politicians demonise and scapegoat Roma for cheap votes. We need marches in the streets when police brutalise Romani people.

We need Roma to protest more, and we need non-Roma to support them.

If well-intentioned allies are unsure how they should support Roma, they should look to the role played by White people in the American Civil Rights Movement. The 1963 March on Washington was attended by a prominent section of White protesters, including many Hollywood A-listers. People which SNCC activist Courtland Cox called ‘legitimizers’. These strategic allies in the civil rights movement provided support, legitimacy and protection for Black protesters. Non-Roma allies can do the same in Europe.

Staying quiet takes power away from Roma. It says that the denial of human rights to Romani people is not ‘okay’, but it is so common that it has become normal. This needs to change. Discriminatory practices against Roma need to become outrageous in the public imagination (or at least a section of it). Roma “integration” depends on Gadje willingness to dismantle systems which perpetuate antigypsyism. This includes those which deny, or distort the voices of Romani people. The non-Romani majority can call out racism and oppression in ways that Roma cannot. They can provide solidarity and protection by standing with Roma in the face of institutional racism. They can help push Roma Rights issues on the agendas of their elected politicians.

Roma have been, as Dr. King might put it, “the veterans of creative suffering”. We have made some gains in the movement for Roma emancipation, but the progress has been glacial. For many, over the course of the last 20 years or so, their daily existence has become demonstrably worse, while hate speech has become steadily more mainstream.

History does not repeat itself, but it often rhymes, said Mark Twain. Non-Roma cannot allow the present-day situation to continue its steady creep backwards towards the intolerance of the 1930’s. Though international organisations have put in some work to address the inequality, it is with the people where change must come. In people, is where the root problem also lies, where injustice is perpetuated. There needs to be a fundamental rejection of the ideologies of antigypsyism, from a small but vocal section of society, Roma and non-Roma alike.

This can start with you.

It can be online, it can be at the supermarket, at work, in the media, or on the picket line. But there needs to begin a shift to close down the spaces where racism against Romani people flourishes unchecked. Until then, as Dr.King declared on the steps of the Lincoln Memorial in 1963: “No, no, we are not satisfied, and we will not be satisfied until justice rolls down like waters and righteousness like a mighty stream.”