The Norwich Radical was born in the student movement, and we continue to play an active role within it. We recognise that while official structures are not the sum total of the movement, they are undeniably important. Following a highly controversial year for both the National Union of Students itself and the higher education sector as a whole, we contacted all candidates standing for the President, Vice-President and National Executive Council roles and offered them the space to write about their election campaigns, why they are standing and their visions for NUS.

Voting will take place at NUS National Conference, held this year in Glasgow between March 27th and 29th. Full information on the conference can be found here. The below statement is from Eva Crossan Jory, Vice President Welfare candidate.

My involvement with student politics began in FE, where I served as lead student representative at City and Islington College. I went on to be Goldsmith’s first woman Activities and Campaigns Officer, and was then elected as Union Development Zone second place on the NUS National Executive Council, where I hold the NUS leadership accountable. I’m currently president of Goldsmiths Students’ Union, where I’m proud to say I’ve made radical transformations across campus.

When students said the rent was too high, I led the UK’s first ever rent strike, winning tenants an incredible £650,000 in compensation. When students said they didn’t feel safe on campus, I founded an institution-wide campaign to tackle sexual violence and established Goldsmiths’ Hate Crime Reporting Centre. And when students said they weren’t getting enough mental health support, I secured more counsellors, including an Independent Sexual Violence Advocate, and produced the “Gold Paper”, analysing the role my institution played in causing and solving student mental ill health. 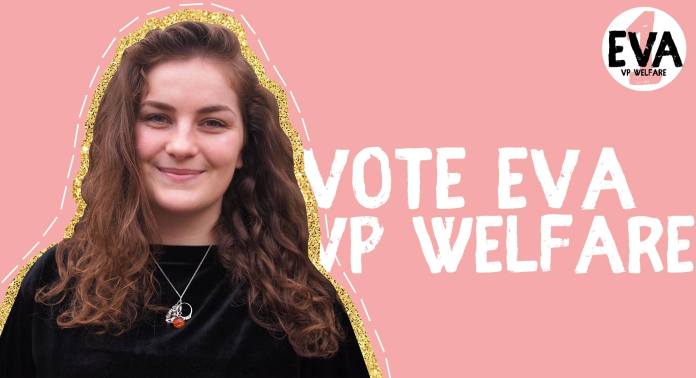 In my time as President, I’ve learnt that student welfare is inherently political. I believe when we lobby for more resources on mental health, when we fight for cheaper rent for students and when we stand with student survivors on our campuses and in our national movement we are making a political statement. We are redefining and reshaping what we stand for and what we stand against. I stand for a transformative Welfare Zone, one that fosters communities of care on each and every campus and mobilises collective action against austerity and oppression.

Our response to the student housing crisis we face needs be radical and it needs to be immediate. We need a Welfare VP who doesn’t just support the movement for safe and affordable student living – we need one who empowers it into action. After leading successful actions as a student at Goldsmiths, I co-authored NUS’ guidance on rent strikes. As VP Welfare, I will finally put that guidance into practice, because our NUS should act like what it is – a renters’ union, 7 million strong.

From “Know Your Housing Rights” workshops, available to every student, adapted for devolved laws in every nation, to supporting rent strikes, to creating guarantor schemes in colleges to tackling housing insecurity experienced by LGBT+, estranged and international students – I will be the officer to organise and campaign for effective radical action on student housing.

Sexual harassment is rife on our campuses – in halls, on work placements, in SU spaces and on nights out, one third of women students have experienced it. This cannot be tolerated. Student survivors are not getting the support they need and the Welfare Zone must act now. I will demand and campaign for properly funded specialist services for survivors, working with the NUS Women’s Campaign to launch “Against Sexual Violence” campaigns across the country. I will fight for an end to it both inside and outside of our movement, reviewing both NUS’ policies on sexual violence and those of student unions.

When it comes to mental health, we must act collectively – our solutions cannot be individual. From profit being put before patients in the NHS, to the marketisation of our education, cuts and privatisation are stripping away access to the essential mental health services that we need – and so our SUs must become communities of care. The Welfare Zone must launch campaigns to fight NHS cuts and privatisation, linking SUs up to local and national campaigns, as well as campaigning to ensure all colleges get ring fenced funding for fully resourced counselling services. As VP Welfare, I will also commission a survey into the relationship between student mental health, financial pressures and retention.

“Liberation at the heart of everything we do” has become a mere slogan of our movement. We must not treat liberation as a buzzword, but actually integrate it into every campaign, every society and every activity – from LGBT+ inclusion in sports, to running ‘Demo HQ’ so disabled students can participate in the fight for free education. The Welfare Zone fights for the welfare of no one, if it does not fight for the welfare of all students. I will prioritise anti-racism and anti-fascism in the Welfare Zone, working with the NUS Liberation and Sections Campaigns to ensure those directly affected lead the fight against violence and oppression.

It is about time that the NUS Welfare campaign catches up with campuses across the country: the health and the very fabric of our learning communities are under existential threat. Only radical, caring, and collective action is enough.