Reasons for migration come in many forms.The now globalised and fully interconnected 21st century world allows people the capacity to travel great distances in search of work or a better standard of living for themselves. Increasingly though, more and more individuals, mainly from the developing world, are forced into the migrant sphere through no fault of their own. I have already touched on two types of migrant; those coerced by economic situations to move to foreign countries, as well as those unable to sustain themselves in their native environments as a consequence of various forms of climate effects. There is of course another migrant population that find themselves forced to leave everything they held dear behind as a result of more pervasive and damaging spectre: conflict.

It’s certainly not new news that people are forced into migration as a consequence of war, be it civil or national. The UNHCR estimates that the conflict in Iraq has internally displaced over 4 million people, forcing a further 264,000 to leave the country in search of peaceful safety further afield. Afghanistan, Vietnam, Cambodia, Laos, Libya, Yemen, Somalia, Algeria and the DRC are just a few of the numerous countries that have been afflicted by brutal conflict that has seen many people lose not only their personal belongings and livelihoods, but their communities too.

Although living in a globalised world, it appears we do not yet talk in a fully globalised manner.

While we can acknowledge the complex economic and environmental factors that can play a role in fuelling the huge numbers of people forced to surrender their familiar existence for something far more alien and hostile, we perhaps too need to examine more closely the glaringly obvious relationships between war and migration. Although to me and you this barely needs mentioning, I feel it has become normalised to such an extent that it is now simply taken for granted and then forgotten.

As a millennial, alongside debt, war has been the other constant in my understanding of the world I live in. Since 2001, the UK has been involved in some form of foreign international aggression against individual nation states, or certain groups within. My country has been fundamental in the instigation of all major 21st century conflicts and continues to be front and centre in discussion about future potential hostilities with groups or nations disdained by the Western order. What baffles me is, given we are so prominent in such activities and that countless discussions concerning the “should we or shouldn’t we intervene” responsibility paradigm take place so frequently, why we never discuss the cost of war from the point of view of the countless civilians displaced as a result. We are consistently told that justification for intervention centres around removal of an ideology or individual that seeks to threaten or challenge us in some way, yet the peoples of these places are only ever discussed as vulnerable, in danger and deserving of our heroic intervention. Rarely are the same people considered from an angle reflecting the likely outcomes arising from this conflict. Although living in a globalised world, it appears we do not yet talk in a fully globalised manner. 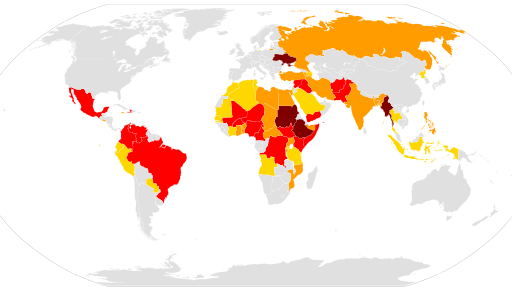 As we drop billions of pounds of high tech weaponry on the heads of sleeping children across the globe, we do so under the impression that we are liberating the survivors into a new and better life. The current conflict in Turkey is the current manifestation of this type of ‘heroism’; we talk of freedom and democracy yet ultimately upset delicate political balances that consistently lead to the impoverishment and displacement of the people supposedly afflicted by the opposed regimes. Unsurprisingly, following the destruction of their homes, communities, national infrastructure and institutions, millions of people are forced to leave their countries and search for a new place to start afresh (no doubt we will see the same script play out in Afrin over the coming months). Why would one not be motivated to travel to the very country responsible for causing the destructive disruption that has usurped them? The problem here then seems that a disconnect exists between our persistent quest to emancipate those in less democratic states/regions than our own, from the increase in immigrants and refugees originating from these very same countries. These issues are intrinsically linked yet rarely discussed as such.

Governing narratives suggest we must be responsible and take international action where necessary to ‘protect’ people, yet we fail to mention this as a fundamental driver for the increased levels of immigration across the globe. Despite living in a globalised world, we do not appear to speak with a globalised tone; one that acknowledges the interconnectivity of the action of war on the outcome of displacement when attempting to remedy the latter. While we should accept that people should be free to move peacefully around the world as they please, we must also accept that it is our bombs that force them to. We cannot continue to ignorantly enact foreign policy interventions without fully accepting the long-term resulting consequences of these actions. Perhaps then if the UK were to have such a connected outlook about such acts of violence on foreign shores, it may find itself involved in fewer and fewer conflicts, which can only ever be a good thing.