As The Owl looks set to close once more, I took a look at the history of the iconic venue and where its closure would leave the Norwich DIY scene.

The chaos and hubbub spill out to the quiet back streets of that historic mound by the castle. Red paint, skate decks and Antifa flags adorn the walls, and a rotating crowd of faces mill around the bar inside. The air is joyous and muskily sweet with the smell of human sweat, stained beer and crust punk looming miasmic and familiar. In some way or another, I know everyone in this room.

This was The Owl Sanctuary, before the relocation, still riding high on the joy of community venture. Punk, metal, hardcore, ska – and everything in between – called this decaying building home. Its opening served as a rallying cry to the various promoters and bands keeping the Fine City busy.

Before it opened, gigs were happening in places like Karma Kafe, huddled in a basement, a secret DIY punk shame cosying with the student night DJs and drink-deal menus. Attendance was great, but sporadic and split – pop punk shows could happen on the same nights as hardcore shows, the two scenes separate and never inter-mingling.

The Owl Sanctuary opened in the same building as the beloved Marquee. Nostalgia fuels movement and for a year or so the venue boomed. The DIY punk community donated time and skills to get the decrepit building in a fit state. For a while, this felt like the home for a community.

Two years after the infamous relocation of The Owl, a community led campaign that saw all manner of public figures, bands and promoters rally around the venue – it is set to close its doors once again. Current owner, Ben, has decided to leave, and unless someone with a substantial sum of money appears to buy the business The Owl Sanctuary will close on April 1st. As the time of writing, there is no more news about the situation other than the statement which was posted on the Facebook page announcing the decision. 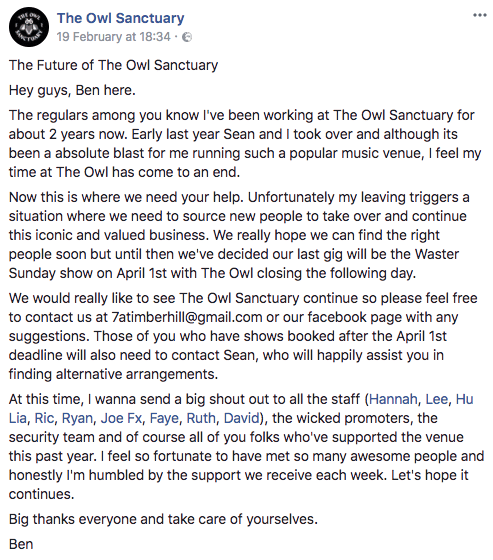 The silence is deafening and clear, this surely is the end of The Owl.

To understand why this time round is different – no community campaign, no urgent media coverage, no real attempt to save it – I think we have to digest public feeling towards the ‘new’ Owl.

In the wake of relocating and all the politics that surrounded the move, I believe that the venue never truly recovered favour. Amidst the handover from previous owner, Dan Hawcroft, to Ben and Sean it came to light that the Owl was not the community driven utopia it claimed to be. Certain promoters seemed to have less access to book shows as favoured bookers monopolised the billing and there were alleged claims of staff members being unfairly dismissed and poorly paid.

The new location, as defiant a win it was to still have the venue, was also a poor replacement – the stage area is inaccessible, being up two flights of stairs, it is a much smaller capacity, and the downstairs bar never felt truly welcoming. I believe the new owners did the best they could with the ailing business and the sour taste left from the politics of the old place. However, it is not enough to just book shows and sell beer and hope people turn up.

Arguably, there can never truly be a community driven safe space for alternative culture so long as the primary business model is centred around selling beer. This is not a straight edge sentiment, but an idea evidenced from the various DIY co-operatives and squats such as Empty Shop in Durham and DIY Space for London. In these places, alcohol is not the star of the show. Instead, funding for the spaces rely on co-operative efforts and ticket prices for shows – with any form of bar being non-existent or complimentary.

the Norwich DIY music scene is vibrant and regenerative

Ideally I would like to a see a true collective of promoters and local bands come together to open some kind of community-led space – akin to a lot of European venues and squats that actually nurture a DIY scene and strive for a safe space outside of a pub context. I fully believe this is possible; the Norwich DIY music scene is vibrant and regenerative. Gigs have continued in places like Gonzo’s, and a burgeoning movement of promoters, bands and grassroots organisations will surely fill the vacuum left by The Owl Sanctuary.

The loss of The Owl Sanctuary is sad, but I don’t believe that it’s the final nail in the coffin for alternative culture in the city. It is just a building, and the hard working, enthusiastic (often restless) people booking shows will continue to do so. And whilst this DIY spirit remains, I know that we have nothing to fear. The Owl became a safety blanket, the easy cop out for bands and bookers, which although great in many ways, just made us too reliant on a monopoly for shows. I wish all who have put the time into that place the best – you have contributed to a short-lived yet iconic dream of what a community space could be – but now we have the chance to really rebuild.

One thought on “WHO GIVES A HOOT? THE CLOSURE OF THE OWL SANCTUARY”