This week sees the UEA Students Union officer elections 2018 take place at Norwich’s largest educational institution. The Norwich Radical contacted all candidates in the election for comment on why they’re running and what they stand for. This article and the others in the series are intended to offer an insight into the current and future state of the union and of the UEA more broadly.

UEA students can vote in the elections at uea.su/ueavotes until Tuesday March 6th.

The statements of those candidates for the part-time Ethical Issues officer and Liberations officer positions – Students with Disabilities officer, Ethnic Minorities officer, LGBT+ officer (open place), LGBT+ officer (Trans & Non-Binary place), Mature Students’ officer and Women’s officer – that responded by the deadline are presented here, unedited, along with their manifestos. The manifestos of the candidates who did not respond are presented without comment. Candidates are listed in alphabetical order. 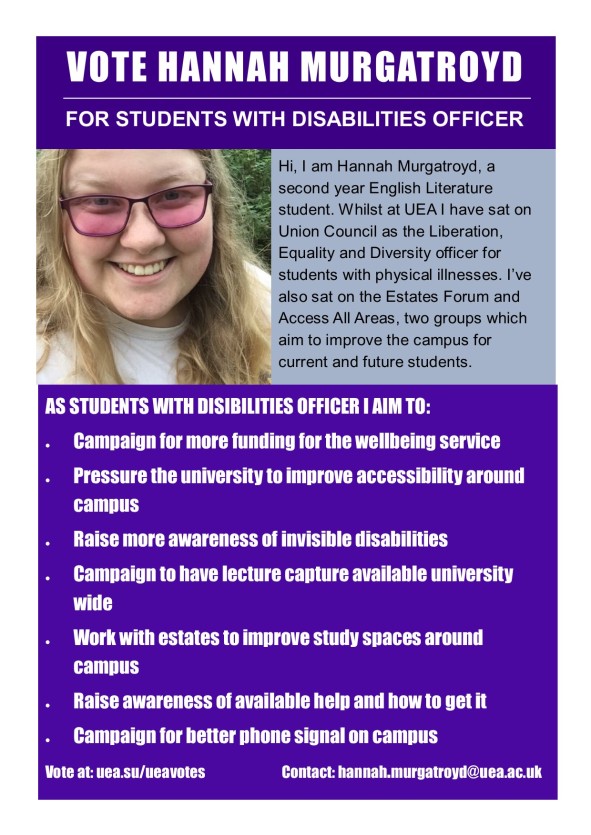 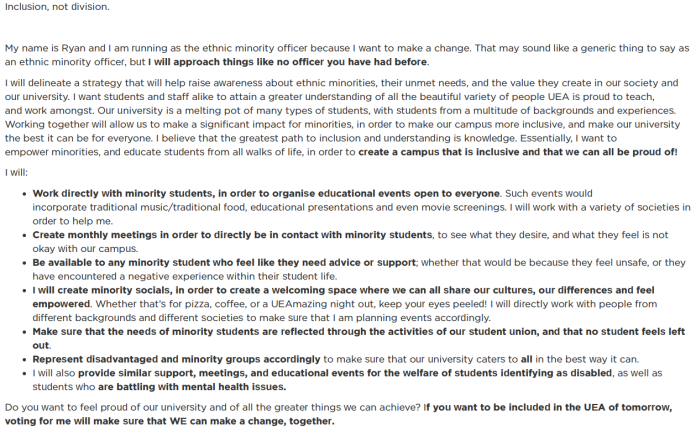 Candidate did not submit a statement to us or a manifesto image to uea.su. We instead present a screenshot of their text manifesto. 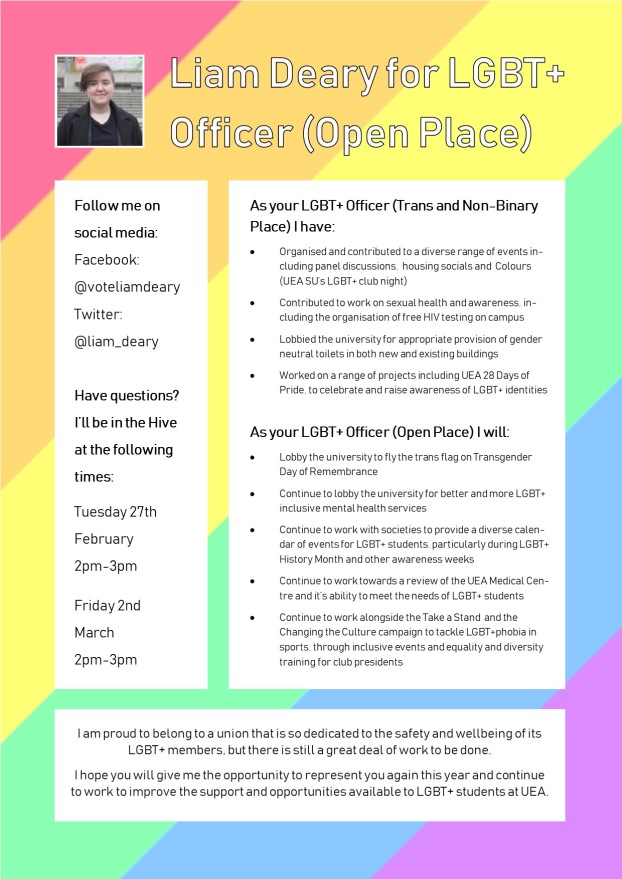 [Candidate did not submit a statement to us or a manifesto to uea.su]

Editor’s note: Candidate did not submit a statement to us or a manifesto image to uea.su. We instead present a screenshot of their text manifesto.

So my name is Diem-Sylvan Von-Pratt and I’m a 32yo student on a humanities foundation year, leading to a degree in international development. Diem is from Horas Odes 1.11, Carpe Diem, so my slogan is Carpe Diem, Seize the day, Seize the Knowledge, Seize the Means; which is a nod to Marxism. I felt that I wanted to reference my left wing politics, without making it the focus of my campaign, which is about welfare, inclusion, equality and intersectionalism. I’ve had many previous student politics roles in college on this welfare, equality and diversity platform, which gives me an insight on how I can perform in the role effectively. Over the last year, I’ve seen Lewis Martin in this role, who I greatly admire. As a Mature Students’ assembly representative, I’ve been inspired by the success and struggles that Lewis has had in what is a very difficult role, with Mature Students being one of the hardest groups to engage. I see mature Students as a minority group, thus any barrier to education impacting us exponentially, which is why I see it as important for an intersectional approach to welfare with the other welfare officers. Mature Students are a wide demographic, making inclusion particularly significant, with this in mind I have a few strategies. I’m focusing on a family friendly campus, which is inclusive of carrers for adult children as well as parents, so this means events like weekend bbqs and fun days, as well as mixers on a Wednesday afternoon, when mature students are lest likely to have family or educational commitments. I also want to create a mature students position on club and society committees, that would function like the first year reps, so every society is able to engage with and be inclusive to the particular mature students that are attracted to it. 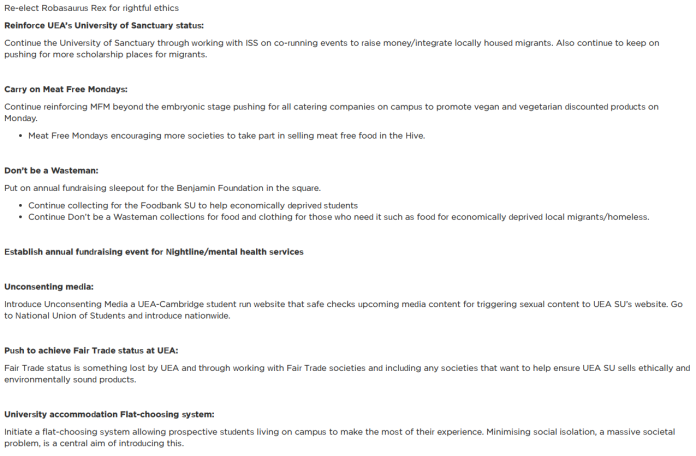 Ethical Issues is an area I have had experience working non-stop in from the moment I was provided the opportunity by UEA students. I have worked to implement a wider variety of vegan and vegetarian options on campus through Meat Free Mondays and want to help students have the option of being more environmentally and ethically friendly too. On these two intertwined points working through Don’t be a Wasteman has been an absolute pleasure, and has provided societies and our dedicated network of students the opportunity to take in donations of food and clothing for locals and students in need. However this work can only be continued alongside my aim to work with Fair trade society on achieving Fair Trade status, and accomodation reform, if I can get re-elected.