A new project to count the number of Romani Gypsies and Irish Travellers in London was recently launched by London Gypsies & Travellers and Mapping for Change. Their goal is to provide an accurate estimate of the numbers and distribution of GRT (Gypsy, Roma and Traveller) people across the city.

Official census statistics on Romani and Traveller people in the UK are famously inaccurate (only 58,000 in the 2011 census). This is partly because neither group are traditionally very fond of official registers, particularly those which record ethnicity.

And why should we be? Throughout our history, censuses and registers have often been followed by imprisonment, expulsions, torture and genocide. In modern times they have been used to sterilise Romani women in Sweden, Hungary and former Czechoslovakia. Police forces have used them to brutalise communities in Sweden and Slovakia. Children have been registered and fingerprinted in Italy to aid in deportations. And in France, a 1969 law dictates that Roma and Travellers may not exceed 3% of the population of any given municipality.

The collection of data by ethnicity is often implicitly associated with discrimination across Europe, and these examples show how easily such data can be misused by authorities. As children in the UK, it is drummed into us: never fill in the ethnicity section on forms and applications. The general view being: what good could come of it?

So why are most governments afraid to collect data?

The problem is, without data disaggregated by ethnicity, Romani and Traveller populations become invisible. The people who matter (politicians, policy makers and local authorities) have an easy excuse for not challenging disparities in health, education, welfare or employment because there is no information which tells them where the problems lie. Worse, this makes it easier for these same people and others to ignore, exploit, or discriminate against Romani and Traveller people across Europe.

In the UK, the lack of self-identification in official censuses means Romani Gypsies and Irish Travellers are unrepresented at a local and national level. It is very convenient for authorities to have an incomplete picture of the local GRT population when it comes to planning and delivering pitches and sites. In Britain, as in the rest of Europe, discrimination cannot be exposed and challenged if there is no data. In Romania, data is not disaggregated by ethnicity, so the European Roma Rights Centre carried out research into health inequalities between Roma and non-Roma throughout the country. They found that the average age of death for Roma was 16 years younger than the majority population, and the mortality rate for children under the age of 10 was three times higher. This information could only be revealed through the researchers’ collection and analysis of disaggregated data, in this case by ethnicity, and also by age and gender. 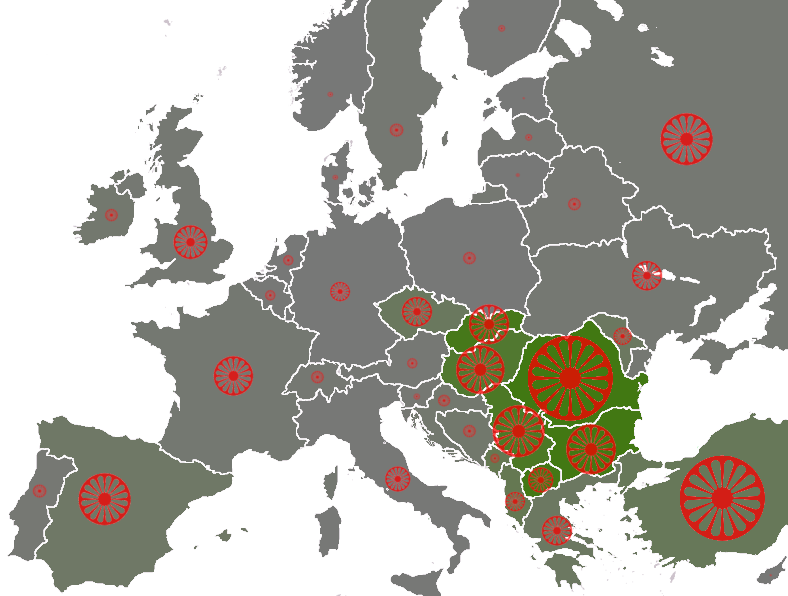 So why are most governments afraid to collect data? An obvious reason is that whenever data is collected on a small scale by local municipalities or civil society organisations, the resulting statistics usually demonstrate the appalling inequalities faced by Romani and Traveller people. This doesn’t exactly cast the government in a favourable light, so they are unlikely to want to push the boat out and collect more of this sort of statistics on a national scale.

Another reason is the misconception that publishing general data on a group of people relating to ethnicity means violating personal data protection laws. This is not the case. The whole point of disaggregated data is that it helps to find hidden trends in a larger (aggregated) data set. Information linked to any one individual is not useful and should never be published.

Whilst the UK government is basically the only EU state to collect and publish disaggregated data, Romani Gypsies and Irish Travellers remain reluctant to self-identify due to fear of discrimination, meaning they are just as invisible. As long as the gap in the data remains, the easier it is for these groups to be discriminated against in access to housing, health, education, and employment. In the meantime, the government is steadily making it more difficult to self-identify by continually reclassifying ‘Travellers’ in the planning process, no doubt to the point where there are so few left on paper that they cease to be a concern for local authorities.

As long as the gap in the data remains, the easier it is for these groups to be discriminated against in access to housing, health, education, and employment

Initiatives like the mapping project in London combine traditional census methodologies with steps to directly challenge discrimination, by asking Romani Gypsies and Travellers to share their experiences of racism as part of the project. There is always a huge element of trust involved in the exercise of collecting data on ethnicity and discrimination. The cooperation of Romani and Traveller led initiatives is crucial, and means respondents are far more likely to provide information.

Would it be too much to ask for the government to cooperate with organisations such as these, and make a concerted effort to plug the data gap for GRT ethnicities? It sounds like a big ask – a dedicated census working on a local level across the whole country to build a more accurate national picture. But when you consider the sobering inequalities shown in the scant reports and statistics that already exist, the need becomes much more urgent.

It is understandable why many are wary of ticking a box on the census which they believe might open them up to all sorts of discrimination further down the line. It is also easy to see why the government are complacent in measuring accurate figures for GRT people. But the availability of online surveying tools, anonymous censuses, community outreach organisations, and cooperation with Romani and Traveller people means that it is possible to build a clearer picture of the population in the UK than currently exists. Ultimately though, it is in the national census where the numbers really matter. The next one will be carried out in March 2021 and may be the first ever to be predominantly online. If we want to expose racism and discrimination in our society, Romani and Traveller people need to stand up and be counted, and use this next census as an opportunity to fight back against antigypsyism.