Following the abhorrent remarks recently made by America’s comb-over-in-chief, I was impelled to pen an article outlining the plethora of innovative, iconic, and exemplary movements and people to emerge from Africa, contrasted with the shameful, embarrassing and downright inexcusable socioeconomic destitution rife across the ‘wealthiest country in the world’. However, after further consideration I imagined the brief expression of dismissive ridicule that my good friend Siraj, a native Ugandan, would have offered in hearing such an immature and ignorant statement about his fair land, and so have decided to give as little attention to it as he.

Instead my article concerns a far more serious problem endemic across the continent, one that has been allowed to become so widespread through international free trade mechanisms, that it threatens to circumvent democracy, subverting whole nations into passive submission. We shall now consider the tobacco industry’s fervent assault on Africa.

Smoking kills, and it does so in gargantuan numbers; more than 7 million year according to the WHO, that’s more than malaria, TB and AIDS combined. We in the economic North have known for a long time the link between smoking and lung cancer, despite the industry’s blatant refusal to accept such causality. As a result and against the tide of neoliberal deregulation rhetoric insidiously tainting public health policy, most developed countries have gradually brought into force a number of fiscal and practical measures to urge people to quit and deter people from starting, with some impressive results. Not all countries have found this as easy to accomplish as others however.

There are over 75 million smokers in Africa with that number set to pass 100 million by the end of the next decade.

Most people, whether they realise it or not, have heard about some kind of free trade agreement that has emerged since the turn of the century; NAFTA, TTIP, TPP, CETA to name a few. One of the lesser known mechanisms of what are essentially investor rights agreements is the Investor State Dispute Settlement (ISDS) court. Put simply, these arbitrary judiciaries enable investors, usually in the form of corporations, to take sovereign nations to court if they feel that any legislation passed by that country has or will damage their profits.

As crazy as this seems, these cases are both common and widespread, with Canada alone facing 37 within the NAFTA from 1995 to 2015. In relation to tobacco, Australia recently emerged victorious from an international dispute with Phillip Morris over plain packaging on cigarettes, ensuring that this effective method of advertising suppression remained in place across the country. The court battle wasn’t cheap either; although the exact figure remains confidential, it is estimated that Phillip Morris was required to compensate Australia for court costs upwards of 50 million AUD. While we may question whether this challenge by the tobacco company should have ever been possible in the first place, the serious ramifications of the ISDS mechanism become apparent when we consider much smaller, less developed countries with relatively minute GDPs. 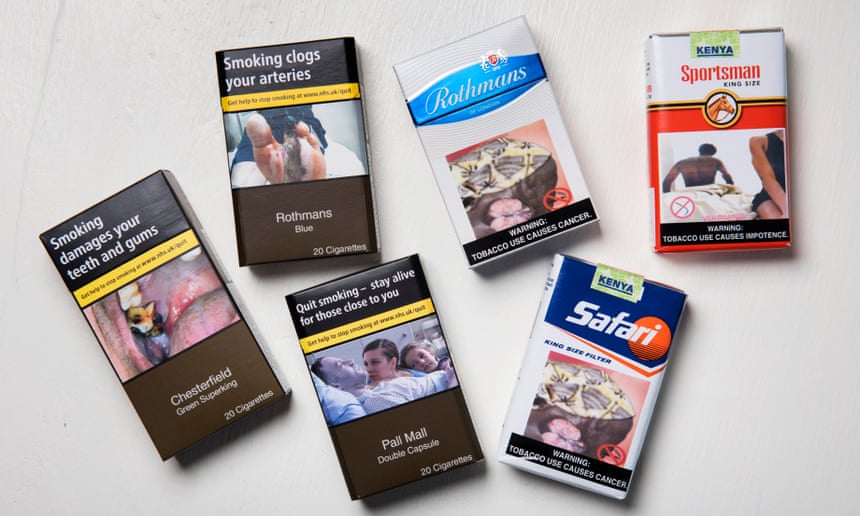 ( Linda Nylind for the Guardian )

Let’s start with some numbers. There are over 75 million smokers in Africa with that number set to pass 100 million by the end of the next decade. In 2016, British American Tobacco (BAT) raked in 14.75 billion USD with a profit of nearly 5.2 billion. In the same year Namibia (not to be confused with Nambia) accrued a GDP of 10.2 billion USD, Togo could only manage 4.4. Following 40 years of globalised free market capitalism, crafted by Western states to ensure the system worked in their favour, we now find ourselves in a situation in which  companies from these parts of the world have more productive capacity than an entire nation. As a consequence these companies possess significantly greater resources to tie up developing countries in lengthy and costly legal battles when they attempt to implement policy to protect their citizens from the dangerous effects of consuming cigarettes.

BAT have sent intimating letters to Uganda, Togo, Gabon, Democratic Republic of Congo, Ethiopia, Burkina Faso as well as Namibia inferring public policy to prevent or subvert the sale of their products is in breach of not only international trade agreements but even their own national laws. Kenya has been embroiled in a similar dispute with BAT as Australia with Phillip Morris, with the high court eventually favouring the nation over the corporation, for the prior 15 years during which the case was ongoing however, no restrictions on promotion and sale existed, with the company free to continue selling unrestrained. Worse still, February of last year saw the firm enter into another case at the supreme court level, continuing the paralysis of the Kenyan government  to act in the interest of its own people.

it seems these merchants of death are intent on focusing their attentions on what they clearly see as weaker prey.

Tobacco companies are well aware of the addicted qualities of their products and can afford to play the long game; lengthy legal battles at best cause minuscule dents to their humongous profits, all the while ensuring more people become hooked on their wares. Such restrictions on packaging and sale are of small significance to the likelihood of repeat custom from those already familiar with the nicotine high cigarettes offer. So while developing countries face the prospects of financially draining and time consuming legal disputes with companies with decades of experience in the field, these behemoths regard these activities as merely another overhead to be added to the spreadsheet.

With richer developed countries both educated and wealthy enough to fight tobacco companies, it seems these merchants of death are intent on focusing their attentions on what they clearly see as weaker prey. Developing nations already facing a multitude of challenges: crippling debt repayments to the North; aid dependent on the shrinking of the state apparatus; government corruption; the effects of climate change decimating agricultural industries and poorly functioning education systems are to name just a few. Free trade agreements and international courts permitting companies to effectively dictate national legislation seem now to have become the newest feather to be added to their already heavily weighted cap of woes.