Perhaps the most significant reaction to the Trump administration’s unilateral recognition of Jerusalem as Israel’s capital was that of Saeb Erekat, a veteran peace negotiator for the Palestine Liberation Organisation.

‘[T]he two-state solution is over’, Erekat told the Israeli daily Haaretz. ‘Now is the time to transform the struggle for one-state with equal rights for everyone living in historic Palestine, from the river to the sea.’

It’s a vision with intuitive aesthetic and ethical appeal, proposing to stitch the frayed patchwork of Israel, the West Bank, Gaza and Jerusalem into a unitary state in which Jews, Muslims, Christians, Druze and Bedouin would live under the same secular jurisdiction.

It is also, for now, impossible. The idea is overwhelmingly opposed by Israelis, for whom a single state would end the Zionist aspiration for nationhood. And it is unclear how many Palestinians are willing to follow Erekat in giving up long-held hopes for their own state. Though unrealisable in its purest form, the concept of a unitary state offers something to both sides that the two state solution cannot: the tantalising prospect of access to the whole of the land between the Mediterranean and the Jordan River.

The failure of so many plans for partition over so many decades suggests that any division of the land is just too painful forboth communities. For Israelis, surrender of the West Bank would mean the loss of the Biblical heartlands of ‘Judea’ and ’Samaria’. For Palestinians. surrender of the Right of Return means the loss of the ancestral villages and land captured in 1948. It seems both sides want the impossible: both statehood and access to all of what each regards as their homeland.

But perhaps that desire is only impossible according to our contemporary understanding of nation, which takes sovereignty to mean exclusive dominion over a specified territory. Sovereignty hasn’t always been understood that way. History offers many examples of distinct political and legal systems operating within common borders. In medieval Europe church and common law co-existed with legal systems governing trade guilds and educational institutions. Distinct Islamic, Christian and Jewish jurisdictions followed their respective subjects through the Ottoman Empire. And today, Brexit notwithstanding, the European Union is only the most radical example of a supranational entity to which member states have ceded certain powers. States continue to pool sovereignty through trade agreements, immigration treaties and climate change protocols.

So might it be possible to design some form of confederacy preserving Israeli and Palestinian nationhood while granting mutual access to the same territory?

In its strongest formulation it proposes two states, Israeli and Palestinian, covering the whole area between the river and the sea. A recent collection of essays edited by Mark LeVine and Mathias Mossberg, One Land, Two States: Israel and Palestine as Parallel States, works out a sophisticated framework proposing that all living in the territory of pre-partition Palestine would be free to choose Israeli or Palestinian citizenship. Citizens of both states could live anywhere on the whole land, though there would be ‘heartlands’ around existing areas of Israeli and Palestinian concentration. The coastal plains, for example, would be predominantly Jewish. he West Bank, the Galilee and Gaza Palestinian. Each state would have its own executive, legislature and judiciary, determine its national symbols, decide its own foreign policy, and retain separate militaries. But there would be cooperation as regards the administration of borders, a shared infrastructure, and a common trading area. The bond of loyalty between the state and the citizen would be retained, following Israeli and Palestinian citizens across the land.

LeVine and Mossberg’s book offers a set of valuable though rather abstract proposals. But the work of several grassroots movements is beginning to show what a practical confederacy might look like.

The hard fact is that any conceivable solution to the conflict – one state, two states, parallel states – demands trust and compromise.

The most prominent is the intriguing Two States, One Homeland initiative led by a group of Israeli settlers and Palestinians who, in their mutual love for the whole of the land, have been able to see something of themselves in each other. The project proposes two states following the 1967 perimeters but with porous rather than fixed borders: everyone would have the right ‘to move, travel, visit, work and trade in all parts of the land’; both states would grant ‘permanent residency’ to a significant proportion of each others’ citizens. Many settlers would stay in the West Bank. Many Palestinian refugees would return to their villages and cities in Israel.

Any workable confederacy would face daunting challenges. There would be the political and technical complexities of devolving power so as to give each state as much freedom as possible, while preserving a delicate web of institutions organising issues of joint concern: borders, infrastructure, trade. And there would, of course, be the age-old issue of security. All internal walls, fences, and checkpoints would have to be removed, granting freedoms not just to all those who wanted to make the system work, but also militants set on disruption. 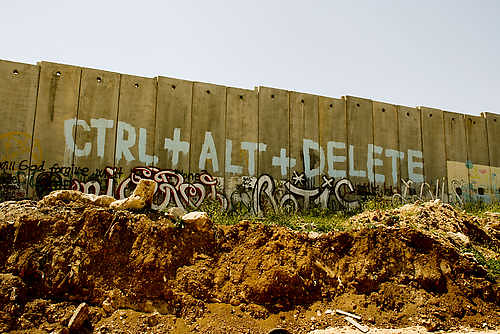 The hard fact is that any conceivable solution to the conflict – one state, two states, parallel states – demands trust and compromise. By challenging both sides to decide whether their love of the land is more important than exclusive ownership of it, the parallel state solution goes to the heart of the issue. As the novelist Eyal Megged puts itin One Land, Two States, referring to a Bible story beloved of Jews, Christians and Muslims:

And yet a confederation already exists in outline, notably in central Jerusalem, where borders are open and distinct laws and regulations apply to citizens of different cultures and faiths. A de facto parallel states structure – albeit controlled by one side – governs much of the West Bank where two cultures live side-by-side, policed through cooperation between Israeli and Palestinian security forces. The foundations are there: the challenge is to make them just.

2 thoughts on “ISRAEL, PALESTINE, AND THE JUDGEMENT OF SOLOMON: MUST THE LAND BE DIVIDED?”