The most recent iteration of Volta, Salo Press’ regular Norwich poetry and prose night, drew a willing and eager crowd for the launch of ‘Sphinx’ by Cat Woodward. After a short open mic session, which saw a number of talented poets sharing their words to warm up the audience, Cat took to the front to read from her fascinating book.

At first the works seemed fragmented, and I found them a little hard to follow. I personally feel the audience would have benefited from a bit of background information and a glimpse into the inspiration for the book. This would allow us to form a more personal connection to the writer. Without this context, the works read seemed to progress with no singular thematic plan.

Although hearing poetry and prose spoken, ideally by the writer, is an amazing and vital part of the process, the narrative of Woodward’s works was more apparent to me when I read them firsthand. I got a very different feeling from the book than from the launch night readings. This may have been due to the choice of works read – certainly, the older poems Woodward began with were noticeably different in style to more recent ones. Poems such as ‘Hot Damn’ and ‘Sayonara Suckers’, which fall into the former category, did not resonate with me as much as newer works such as the ‘Planet Suite’ series.

The title poem, which falls midway through the book, champions a surreal type of rhetoric. The initial dissociation and confusing of the first encounter is gradually dispelled on re-reading, as narrative, visual documentation of the ‘dirty-talking sunset’ emerges. 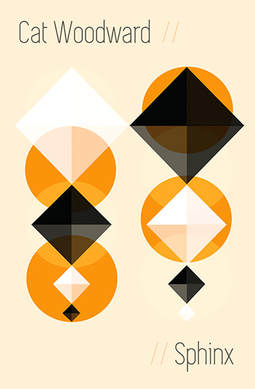 Themes of nature and astronomy recur throughout ‘Sphinx’, as does Woodward’s determined feminism.‘Reply to Richard’ stood out as more explicitly opinionated. This work is exactly that, a reply to Richard Brautigan’s 1968 poem ‘The Pill Versus The Springhill Mine Disaster’. Woodward read us Brautigan’s work before her own bold, dense response, referencing plus/minus theories of gender in her opening line as she becomes ‘neither a place nor object but the negativity measured by what can take out of it’. The freely written, stream of consciousness poem poignantly the misogyny of viewing women as a void. This work was very memorable the way in which it addressed a problem that still exists today.

Another work in ‘Sphinx’ that subtly demanded attention was ‘Mother in Garden: A Portrait’. This work’s title has calming connotations, yet the writing itself asks prying questions of a familiar situation. The ‘impersonal’ flourish of cells reflects on both the garden and the relationship. Metaphors extend through the garden to understand the love of a mother – alternately and ambiguously mother nature as well as a human mother. The line ‘all being in the air’ offers imagery of information being unreachable, unattainable to realisation yet held close. The following line ‘like radio, like rain’ suggests a paradox between the mechanical and natural. The familiar nature of reproduced sound over the radio; and the very singular rain drop.

‘Sphinx’ is an interesting, thematically diverse collection of work. The works would perhaps have benefited from being sorted by these themes. However, given the experimental nature of Salo press, the confusion resulting from this lack of organisation is likely intentional, and allows the reader to take as they please from the work and make previously unconnected links. Poetry and prose evenings are a vital aspect of grass root level cultural exchange. The work of poetry allows us to benefit and appreciate words as well as the people that produce them, and the therapeutic nature of poetry can often tackle issues and information that would be otherwise suppressed or avoided. Although this work had a number of themes that don’t initially seem to run parallel, the dance of words across the page offers a show, entertaining cognition as well as allowing appreciation for the diverse topics and depths of poetry.