Despite being considered one of the “seven wonders of the world”, the Taj Mahal was bizarrely absent from a tourism booklet produced this summer by the state government of Uttar Pradesh (UP). Completed between 1631 and 1648, the Taj Mahal is perhaps the finest existing example of Mughal architecture, considered ‘the jewel of Muslim art in India’, in 1983 it was designated a UNESCO world heritage site.

Its international prestige notwithstanding, a storm has been brewing around the famous monument: it has been the scene of regular protests and the focus of an increasingly prominent political campaign to marginalise its national and cultural significance.

For the trouble makers – militant Hindu chauvinists aligned with the ruling Bharatiya Janata Party (BJP) – the Taj Mahal is “a blot on Indian history” and a symbol of the decadence of past Mughal (read Muslim) rule. The Indo-Islamic architectural beauty of the Taj Mahal disrupts this chauvinistic vision of a culturally superior Hindu India, but it also challenges the argument that the Mughals were “invaders” who made no contribution of significance to the history and culture of the Indian sub-continent.

The controversial BJP Chief Minister of UP, Yogi Adityanath, in typical rabble-rousing style, has claimed that the Taj Mahal is not an expression of “Indian” culture. An earlier BJP campaign to “liberate” the birthplace of Hindu deity Rama, culminated in the destruction of the Babri Mosque in the city of Ayodhoya in 1992, unleashing a wave of deadly riots across the country in its wake. On this basis, the Taj Mahal campaign carries a particularly sinister resonance. It is fair to say that as political projects are inscribed on the physical environment, a cultural landscape is generated that tells us who we are, but most importantly, serves to tell us where we are going, and who we want to be.

The controversy surrounding the Taj Mahal comes in a year in which we have seen heated campaigns and criminal violence around the removal of Confederate monuments in the United States. In early August, a “Unite the Right” rally in Charlottesville against the removal of a monument to the slave holding Confederate General, Robert E. Lee, erupted in violence.

Violent skirmishes between far right and anti-fascist counter protesters quickly escalated when a young neo-Nazi at the rally drove into a crowd of people, killing one local counter protester and injuring nineteen – punishment for daring to assemble in opposition to the symbolism of white supremacy.

In characteristically grotesque fashion, the White House’s resident Mango Mussolini claimed that “both sides” were to blame for the violence. Shamelessly equating anti-fascist activism with white supremacist violence, the short fingered vulgarian proceeded to shift his focus to mourning the loss of America’s ‘beautiful statues and monuments’.

symbolism plays a crucial role in maintaining myths of dominance.

Statues and symbols in public space are important because they are more about our present than our past. Architectural representations in public space are encoded with social relations of class, racial and patriarchal oppression. In this respect, symbolism plays a crucial role in maintaining myths of dominance.

With the Rhodes Must Fall campaign in South Africa – and its spread to the UK – we have seen myths of dominance challenged. Cecil Rhodes was an arch imperialist and vicious white supremacist that helped bring about Britain’s economic and political domination of southern Africa, laying the foundations for apartheid in the process. The campaign challenged the myth of white intellectual and cultural superiority, and in the process played an important part in the ongoing campaign to decolonise education. It also served to confront the colonial amnesia so prevalent in much of western public and intellectual life.  That being said, battles over cultural and political representation within the built environment – the right to the city – and questions of who the city is for, and why, are nothing new. 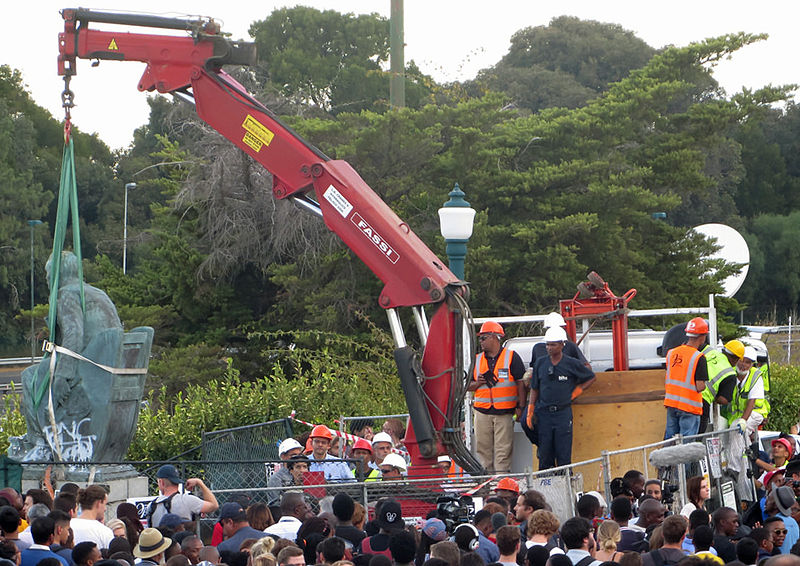 The communards of the Paris commune (1871) – an early experiment in radical socialist governance – declared art and culture as a right to be enjoyed by all. Famously, they brought the Imperial Vendome Column crashing to the ground. “Art and beauty” were to be “deprivatised, fully integrated into everyday life, and not hidden away in private salons or centralised into obscene nationalistic monumentality”.

In Girangaon, the former radical “mill village” of early twentieth century ‘Red Bombay’, a vibrant popular culture gave birth to a renaissance of street theatre, performance, and folk art, where progressive ideas and concepts of social justice were weaved into the fabric of everyday life. The solidarities of working class politics were forged in the streets.

an important question ought to be posed: in exactly what kind of city, town or village do we want to live?

The 2013 protests opposing the commercial redevelopment of the Taksim Square area in Istanbul, acted as a lightning rod for a wide range of people to voice their discontent with the ruling neoliberal-Islamist Justice and Development Party (AKP). Multiple concerns bubbled up to the surface, crystallising in unified anti-authoritarian, pro-democratic demands, and a strong assertion of the protesters right to the city.

The celebrated Marxist sociologist, Henri Lefebvre, creatively defined architecture and the built environment as “a mode of imagination”, rather than a neutral process of construction or a simple collection of monuments. As we witness contemporary struggles over the content and meaning of public space, and attempt to decode the politics of different political struggles as they unfold across our world, an important question ought to be posed: in exactly what kind of city, town or village do we want to live? The re-imagining and re-making of the physical environment we inhabit is surely an important step towards addressing urgent questions of social justice that define our times.