Food. We all need it and each every one of us has a unique and complex relationship with it. From production to acquisition to preparation and finally consumption, the constituent parts of this process vary widely across the planet. The unfortunate reality for most of the global community, however, is that this personal and multifaceted relationship is fraught with difficulty and dilemma. In fact, as we further examine the inner mechanisms and processes of the human-food relationship, we can find ourselves exposed to a somewhat dystopian state of affairs.

Let us begin this journey in Ghana. A country flirting with membership of the middle-income country club, it has produced sustained economic growth for most of the 21st century and is responsible for producing some of the world’s most sought after commodities including gold and oil. Ghana is also responsible for satisfying our insatiable sweet tooth; exporting $1.89 billion of cocoa in 2016, as well nearly another $1 billion in coconuts, cashews and brazil nuts to developed countries. On the surface it would appear that this country, a recognised continent leader in free speech and press freedom, is doing alright. However, when we  dig a little deeper the stark reality of life in this country becomes a little harder to swallow.

when we  dig a little deeper the stark reality of life in this country becomes a little harder to swallow.

Whilst producing and exporting such delicious foodstuffs, the country’s population suffers from a severe case of malnutrition. If you are born in Ghana today, there is a one in five chance you’ll be stunted as a consequence of your mother’s inability to have secured a balanced and sufficient diet, costing the country an estimated $2.6 billion a year. It gets worse; as you will probably grow up unable to access a sufficient amount of salt, you’re probably going to be deficient in iodine, potentially leading to brain damage or underdevelopment. Nearly two out of every three children will be anaemic. If that wasn’t enough, you will likely fail to achieve sufficient intake of protein, calcium and other essential micronutrients. They say childhood is the best time of your life; they probably didn’t grow up in Ghana. 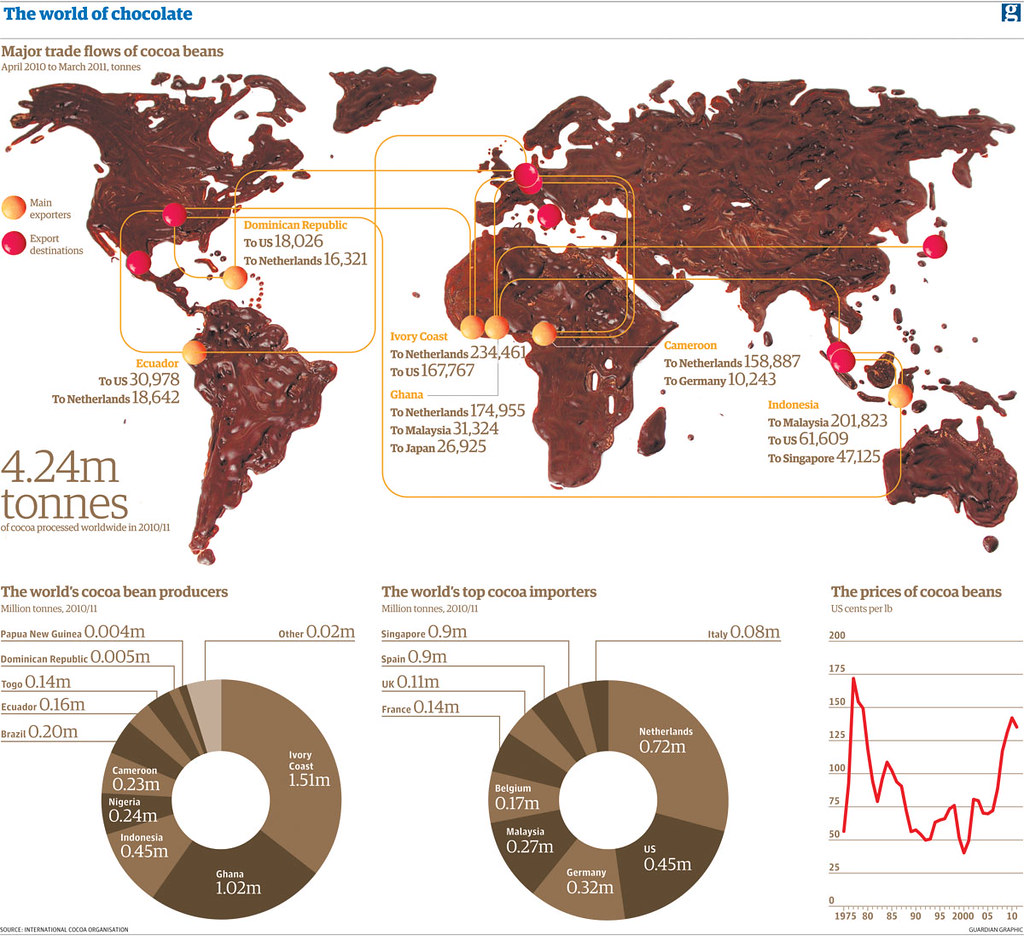 There are a whole host of complex and interwoven reasons for why this paradox of mass food production and malnutrition exists in Ghana. From mass infestations of staple foods, developers or industrial grade famers land grabbing from families and communities to insufficient employment opportunities. The most prevalent and destructive reason however, is that of supply and demand economics. Put simply, things in high demand earn you more; in this particular case, these ‘cash crops’ put more money in your pocket. Consequently, families in a usually subsistence agrarian economy choose to grow cocoa and cashews over staple foods for themselves, allowing them to spend cash crop profits to secure these staples instead as well as covering other costs of living. However the costs of life often overwhelm these small family units and food is then triaged down the list, often resulting in just beans and simple, empty carbohydrates being purchased, with minimal, if any, additional protein. It appears then that the demand for certain products generated by developed, wealthy nations has an indirect effect on the nutritional welfare of the very people producing these commodities.

They say childhood is the best time of your life; they probably didn’t grow up in Ghana.

But wait – the plot thickens. Not only does this economic dynamic have drastic effects on the physical and psychological well-being of the lives of the suppliers and their children, but we the demanders are also facing our own kind of nutritional paradox.

When foodstuffs like cocoa arrive on our shores they do so in a bitter yet potentially delicious form. Processed and refined, cocoa is mixed with sugar and fats to produce a whole host of delectable and tantalising treats. They are though, from a nutritional standpoint, unnecessary and, to some, incredibly addictive. Subsequently,chocolate based produce has become a significant contributor to the obesity epidemic we as a country (alongside the rest of the developed and some parts of the developing world) are experiencing. With all the focus on weight, heart conditions and diabetes, it is often overlooked in this epidemic that many obese individuals are also nutrient deficient. As a consequence of engorging on an excess of calorie-rich, sugar and fat laden products, of which chocolate is often an ingredient, people do not consume enough of the nutrient dense plants and animals widely available to us. We in the West now find ourselves in a paradox of abundance and malnutrition. 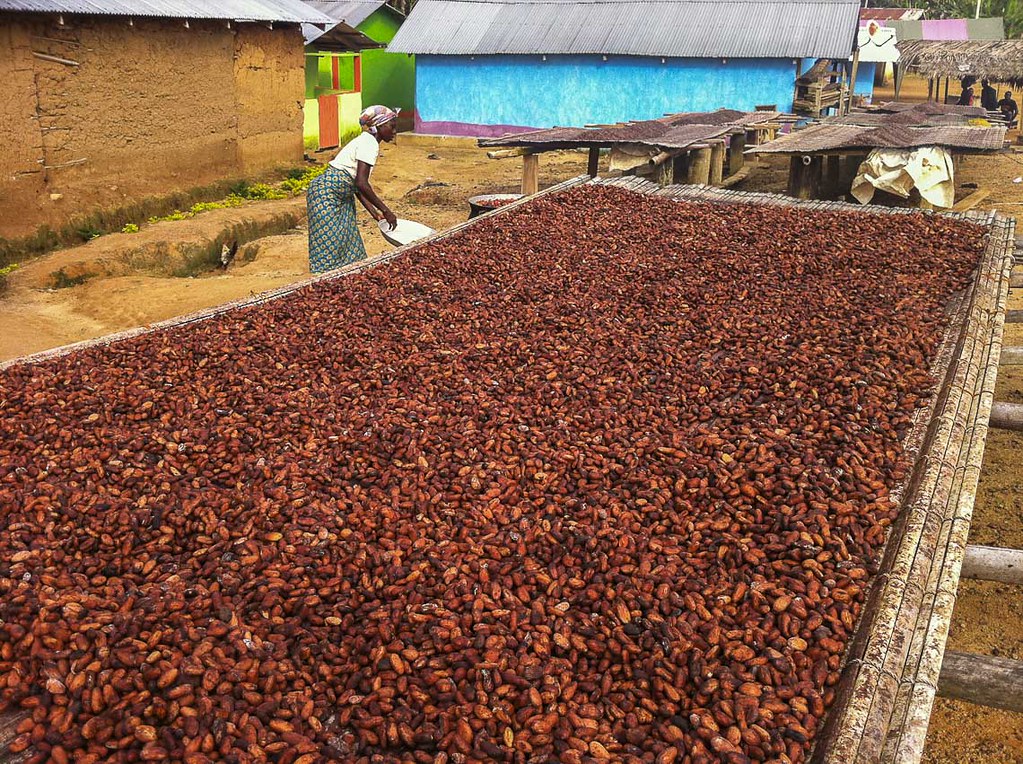 It appears then that we have in our midst a food based dystopia: The ones making certain types of food are doing so at an expense to their own health, in order to provide these foods to others that consume them to an excess that detriments their health.

While I have only highlighted one country and focused only on cocoa as an ingredient of part of a complex set of damaging foods, the mechanism stated above exists worldwide. Indonesia, Malaysia and Papua New Guinea are three of the world’s five biggest exports of palm oil, an ingredient used in pretty much any processed food containing vegetable fat, with many other developing countries further down the list. The same pattern can be seen with arguably the most dangerous of obesogenic ingredients, sugar.

The ones making certain types of food are doing so at an expense to their own health, in order to provide these foods to others that consume them to an excess that detriments their health.

This process of developing country supply feeding developed country demand also has the same damaging effect on the suppliers (and their families) of healthier foods, such as quinoa and avocados. In our attempts to become more healthy, trends in certain ‘superfoods’ have led to inflated prices of these staple ingredients in the countries they are produced, pricing locals out of access to protein and nutrient-rich food sources vital to their physical development and longevity.

As the globalised marketplace has matured, transport and communication methods have improved creating previously unknown access to the world’s bountiful food garden. While this is often celebrated within Western culture though myriad food trends, television shows and magazines, there is and will continue to be an externality paid for, as is often the case, by the very people responsible for affording us such luxurious delights. Lest we forget as WEIRD (Western, Educated, Industrialised, Rich and Democratic) individuals, that although we live in an era of unrivalled privilege of access to excess, it comes at an immense cost to those whose relationship with food is most precarious, and now is even beginning to  damage us as well.