On September 25th, Japan’s prime minister Shinzo Abe called for one of those snap elections we all know and love. Unlike Theresa May, when the results were announced almost a month later on October 22nd, Abe managed to pull through and secure himself a majority in the Diet.

Japan is now swinging heavily to the right. With Abe possessing a mandate to attempt implementation of his main objective – revision of Japan’s pacifist constitution – is the country about to embark on a dangerous path of no return?

Article 9 of the country’s constitution was drawn up after WWII and influenced heavily by the allied forces – namely the US. It decreed that Japan “forever renounce war as a sovereign right of the nation and the threat or use of force as means of settling international disputes”. Sounds pretty tasty right? Abe doesn’t see it that way. He is taking advantage of recent threats and missile tests from North Korea as a way to push forward the amendment of Article 9, and to allow for legitimisation of Japan’s established – albeit legally blurry – Self Defence Forces (SDFs).

Japan has a notoriously violent history, both on the giving and the receiving end. The country has been behind such atrocities as the Nanking Massacre of 1937, the conscription of Chinese and Korean sex slaves or ‘comfort women’ between 1931-1945, as well as a plethora of other massacres and war crimes during WWII.

Following two North Korean missile fires over Japan this year, and just prior to his Japan visit, Trump referred to Japan’s cultural history by sarcastically asking why ‘Samurai’ Japan did not attempt to shoot them down. Such an unsurprisingly racist and provoking comment necessitates the explanation that Samurai culture was infamously concerned only with violence and death – hardly a convention that should be echoed today.

Incidentally, this summer, the famous samurai Tsukahara Bokuden’s 450 year old text The Hundred Rules of War was translated for the first time into English. In it, Bokuden details samurai lifestyle aside recommendations for becoming a valiant warrior. It is interesting and relevant to note however, that Bokuden in his later years was a huge advocate for the philosophy of solving conflict and dispute without the use of force.

With Abe possessing a mandate to attempt implementation of his main objective – revision of Japan’s pacifist constitution – is the country about to embark on a dangerous path of no return?

According to an ancient Japanese folk tale, a hot-headed and brutal ‘Trump-esque’ young warrior boasted of his combat skills, to which Bokuden retorted calmly: ‘My art is different from yours. It consists not so much in defeating others but in not being defeated.’ Indeed Japan could extract some serious wisdom from this allegory.

Not only should this philosophy be adopted by Japan alone, but by sovereign states globally. We live in a world where fire is fought with fire, and where threats, troops, and weapons are deployed without consideration into alternative methods of conflict resolution.

Something that stands apart from this philosophical viewpoint however, is the role modern nations should play in global peacekeeping efforts. States unequivocally carry a responsibility to defend their own people, but this responsibility should also encompass the protection of others. Japan has presented troops to the UN for peacekeeping missions for the past 25 years. It’s efforts, however have been constrained to non-combat activities as the 1992 PKO law permits troops to contribute only if a ceasefire is in place, and their efforts are for self-defence reasons only. 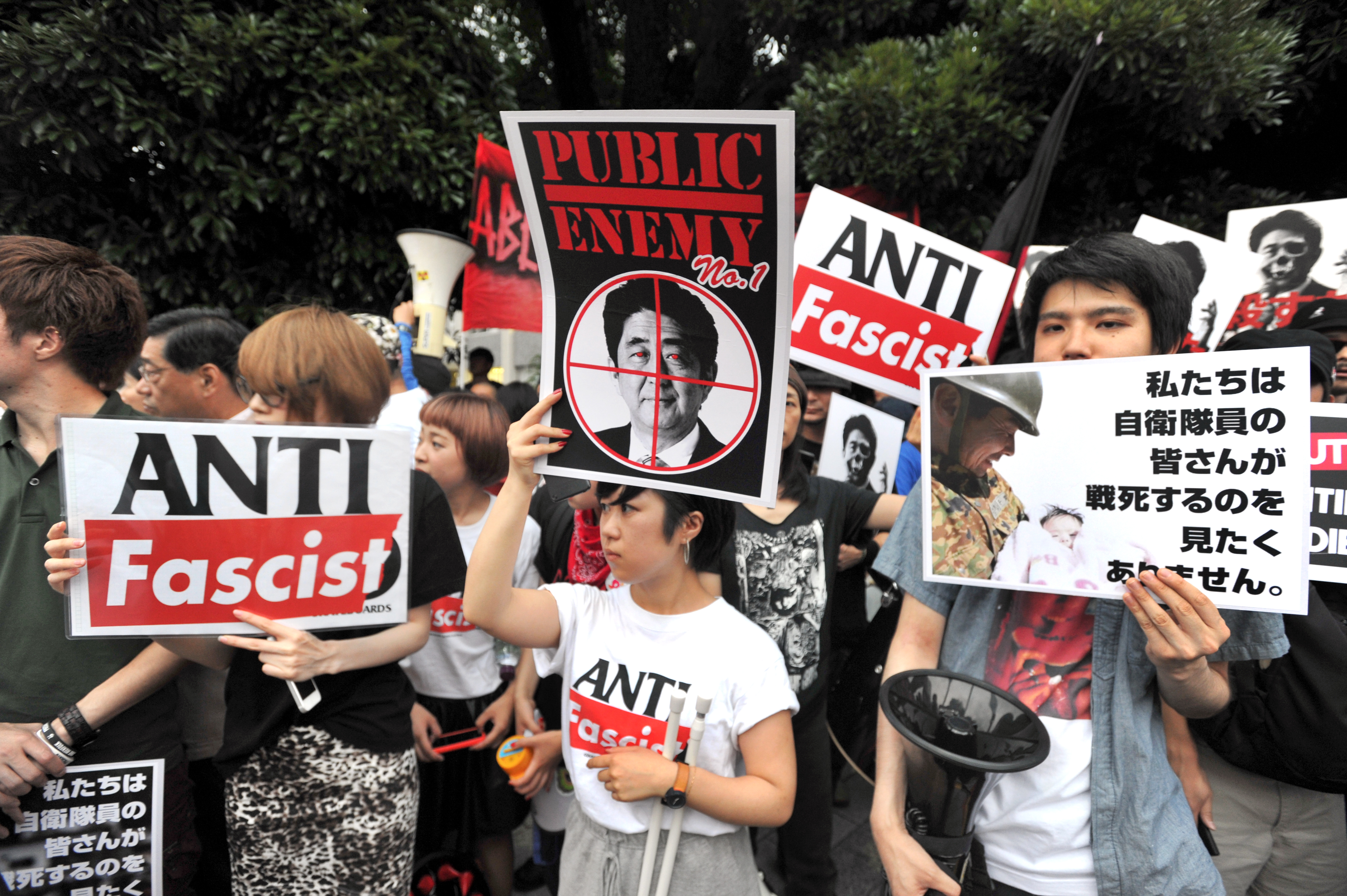 (Thousands of activists stage a protest against collective self-defense in front of the prime minister’s office in Tokyo in July | Photo credit: Yoshiaki Miura)

Earlier this year this proved to be a mammoth legal stumbling block when Japan’s SDFs were forced to pull out of the UN’s Mission in the Republic of South Sudan, as robust protection of civilians was prioritised – a task which the SDFs could not legally carry out. Although Japan has deployed over 10,000 peacekeepers since 1992, they currently provide a shockingly low total of only four peacekeeping personnel to UN peacekeeping operations.

The pacifist argument has become very apparent on the streets of Tokyo as around 40,000 protesters rallied outside the Diet building at the beginning of this month to express disdain for Abe’s plan to amend Article 9.

One of the main concerns of this opposition is the potential use of nuclear warfare, which under Article 9 is forbidden. In 1967, prime minister Eisaku Sato declared that Japan would not produce, possess or position nuclear weapons in the country in response to Chinese nuclear tests. The trauma of Japan’s suffering at the hands of nuclear warfare in Hiroshima and Nagasaki is an acute and painful reminder of it’s horrific and unforgivable consequences;indeed the MoD themselves state in their defence policy that “offensive weapons designed to be used only for the mass destruction of another country … are not permissible under any circumstances”. This is certainly stands as something that Japan should be proud of.

On the one hand, Japan must be able to legitimise it’s SDFs in order for them to be able to contribute further towards global peacekeeping efforts, nevertheless, on the other hand, nuclear warfare threats should not be met with a counterforce of new nuclear weaponry.

Thus, there really are two valid yet differing opinions on what should be done in regard to Article 9. The pacifist argument demands the integrity of the article so that it may acts as a beacon and role model for other countries, whilst the revisionist argument encourages its alteration as a means to bring it up to date with the modern geopolitical climate.

Granted, the modern and future world looks uncertain on the West Pacific coast. However, as is always useful, recollecting Japan’s history serves to both remind Abe of the atrocities of war, as well as to provide a wise insight into some of the philosophical conclusions brought about by those who have lived and breathed violence, combat, and death.

Abe should take a leaf from Bokuden’s book, and if he is to revise Article 9 he should hold tight onto notions of self defence, peacekeeping and non-violent conflict resolution, rather than searching for legal legitimation of aggression, deepening global unrest, and developing weapons of mass destruction.