‘World peace’ is a staple for utopian theorists, science fiction writers, and beauty pageant winners. Sadly, an end to all international conflict still seems like a very distant dream. However, when it comes to war, for the last 60 years there has most definitely been an elephant in the room. Why are we all getting on so well?

Of course this is to say nothing of civil wars, hybrid wars, and grassroots violence, all of which remain (sadly) rife. But when it comes to wars between states, especially between great powers, we are living in the most peaceful era in recorded history. This is even more impressive considering that many were worried a third world war would immediately follow the second. So what’s going on?

When the Second World War came to a close, Ally policymakers (particularly US  ones) seemed to have the whole world at their feet. The US wielded totally insurmountable power – at this point not even the Soviet Union was in any position to compete. Their enemies had surrendered unconditionally and lay utterly incapacitated. Suddenly this group of people were landed with the near unimaginable opportunity to literally remake the world as they saw fit.

Why are we all getting on so well?

Since then, we have seen the proliferation of nuclear weapons, the creation of the UN, NATO, the WTO. and the EU, the ascent of bipolarity (a world system with two superpowers: the US and the USSR) followed by unipolarity (one where the US is the only superpower), and the rapid advance of market globalisation. Since these systems were laid down in the 1940s, the world seems, oddly, to have become a much safer place. Before 2016 (when, admittedly, everything hit the fan a bit), most people would find the prospect of a war between great powers almost unthinkable. The problem is, no one is quite sure why.

However, we are now in a better position to see why our forebears made such good decisions. In 2010, a team of international relations scholars, led by Bruce Russett, conducted a study.* The idea was to treat war just as an epidemiologist treats disease – to collect vast swathes of statistical data and deduce what, if anything, can cause and prevent conflict.

Their study was ‘dyadic’. This means that it took a pair of countries (say, Iceland and Peru) and then chose a year (say, 1987). It would then measure all kinds of qualities about the relationship between them in that year – distance, trade, difference in military power, differences in political system, shared membership of international institutions, etc.. – and then recorded whether or not they resorted to war in that year (for the record, Iceland and Peru did not). For each variable, the findings then constituted a single data-point, or a ‘dyad’. The process was then repeated for every single possible combination of countries in every single year from 1886 to 2001, until there were thousands upon thousands of data points to compare. Then, by carrying out statistical regression, the study could isolate the influence of individual factors, and calculate their importance. 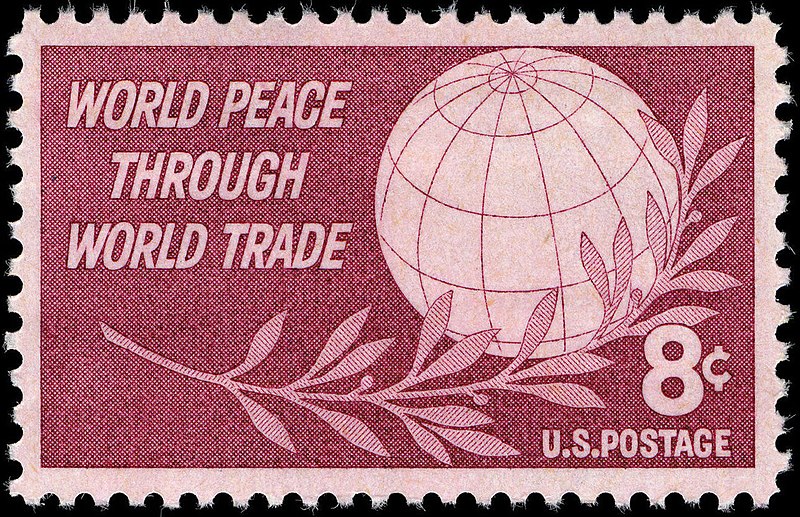 Correlation, of course, does not imply causation. However, there do seem to be some pretty good reasons to believe that more trade means less war.

Liberal scholars have always argued that, due to comparative advantage and economic specialisation (see part 1 of this series), international trade allows counties to attain levels of prosperity they could never reach alone. For example, it is entirely possible that transforming the laptop I am currently typing at  from a pile of elements in a quarry into the Netflix-devouring procrastination machine sat on my desk required the cooperative efforts of many thousands of people, strewn across dozens of different countries. I am personally dependent on all these people for the lifestyle I enjoy – as is almost everyone else in the developed world. The more interconnected countries are, the more antagonism between them could result in sharp drops in living standards. This places a near irresistible pressure on political leaders to cooperate with one another, for the good of their populations. In short, when we depend on one another for everything we enjoy, war is simply no longer worth it.

there do seem to be some pretty good reasons to believe that more trade means less war.

Liberals have declared that there is hope yet for achieving world peace, and the evidence may even be on their side.  The argument is  that the way forward is a combination of democracy, international institutions, and, most importantly, free trade. This is the reason why the EU – with an integrated market at its core – has overseen almost unbroken peace in Europe for over half a century (while the League of Nations which preceded it, based on shaky and fatally flawed principles of ‘collective security’, was unable to prevent the continent sliding into a second world war even more destructive than the first). Perhaps we can trade our way to world peace after all.

*This study can be found in International Relations Theories, Discipline and Diversity, 2nd ed. Page 104-109.