The latest North Korean missile launch over Japan on the 28th August 2017 is a sign that North Korean leader Kim Jong-Un is willing to act unilaterally, despite what any other country may think or want the regime to behave according to international accords. This is obviously disturbing and only goes to show that the North Korean regime is totally defiant towards the international community, and sticking its middle finger up at the United States and the wider world.

One must only go back to the history of the ending of the Second World War to see the human cost of a nuclear weapon, and what it can do. The final  days of the Second World War witnessed the dropping of bombs by the U.S. on the Japanese cities of Hiroshima and Nagasaki, killing hundreds of thousands and leaving many more with radiation burns and sickness, some of whom died in slow, agonising pain. Despite sanctions, the North Korean regime it still pursues its programme of missile tests. The real danger is that a series of events will make it more likely that either side may launch a pre-emptive nuclear strike which will lead to a massacre, and a war that will cost untold millions of lives. These are worrying times in the Korean Peninsula. I worry this escalation of events will lead to a conflict which we have not as yet witnessed. If there is no shift in the U.S. Grand Strategy, and a wider shift in the dynamics of regional politics, there is an increasing possibility of a nuclear exchange which will kill hundreds of thousands, if not millions of people, and be 10 times the effects of Hiroshima or Nagasaki.

we need to see the regime for what it really is: a quasi-Fascist totalitarian state, that has little to do with Socialism or Communism and more to do with state control of its entire population

Firstly, we need to see the regime for what it really is: a quasi-Fascist totalitarian state, that has little to do with Socialism or Communism and more to do with state control of its entire population. Even the designated official name of the state – the Democratic People’s Republic of Korea – is a contradiction in terms, as there is nothing democratic about it. It is built upon Juche philosophy which places the primacy of the state in all spheres of life, and is laced with contradictions. Boiled down, its essential message is that the North Korean state is supreme, exceptional, and must be obeyed at all times.

Secondly, the North Korean regime needs constant conflict in order to legitimise its existence and ensure the population fall into line with their thinking.  By constructing the United States as the pariah state, and having rewritten Korean military history to suit its own national narrative, the people have been manipulated into thinking that the regime is on the right side of history.  This is, of course, not necessarily unique to the North Koreans.  All nations like to construct a narrative that they were on the right side of history, especially the victors. 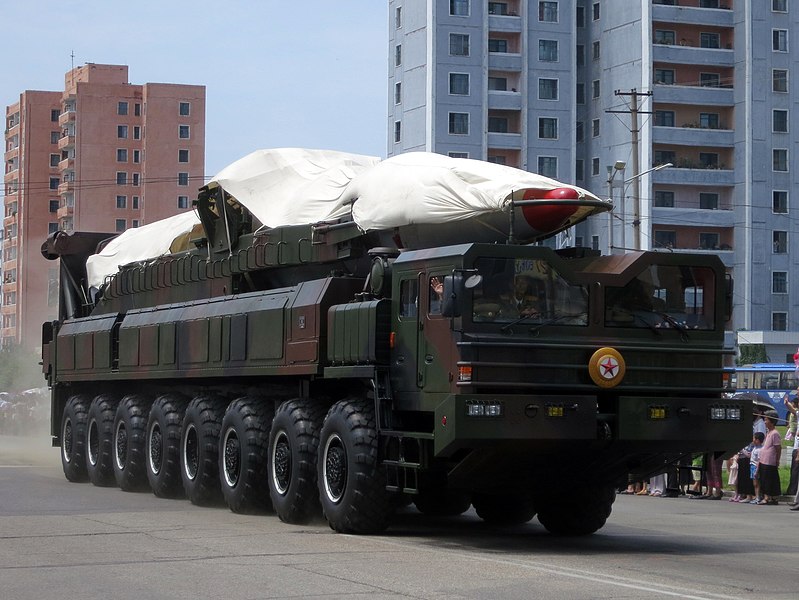 However, this constant state of paranoia and heightened state of readiness to go to war with the United States at a moment’s notice is exactly the control mechanism the regime wants. U.S. President Trump using bellicose language not only heightens this perception, it legitimises it. Additionally, the  overt war games between South Korea and their American allies has only given North Korea more of an excuse to pursue its missile programme.  The Trump Doctrine is based on the massive show of military force, and if necessary threaten any state that pursues an agenda contrary to that of the U.S. and its allies.  For Kim Jong-Un, and increasingly so Trump,, it’s ‘military first’ – an agenda which has a humanitarian cost, with many in the country living in absolute poverty, starving to death, while the country feeds its massive military machine. This has led to a series of defections by North Koreans who were fortunate enough to cross into South Korea.

It is a mistake to draw parallels between the current crisis in North Korea and the example of the Cuban Missile Crisis, using it as a way to analyse the behaviour of both the United States and North Korea, given that the latter threatened a missile strike directly on US territory.  While the Soviet Union and the United States in the 1960s were locked in a Cold War game of chess, they acted in an arguably rational way, managed and regulated by the institutions and mechanisms of the Cold War itself, based on the concept of ‘Mutually Assured Destruction’.  As the famous historian John Lewis Gaddis in his book The Long Peace argued, the Cold War actually brought a greater degree of stability.  The North Korean government  does not act in the same manner, and does not have respect for its region, or the dynamics of international politics.  A new set of rules needs to be applied in order to attempt diplomacy with the regime.

However, not all is lost, and there are ways of averting a nuclear war.  The first being to ‘desecuritize’ the Peninsula, and deescalate potential flashpoints of conflict.  Stop all military exercises and attempt to use the soft power of the emerging superpower of China – who wants the status quo to remain in the region, in order to apply its own diplomatic leverage on its neighbour. Then, by bringing North Korea back to the diplomatic table, it will lessen the degree in which it may feel threatened and may be more conducive to actual talks.  Thirdly, any compromise may actually save lives in the long run, and will make the regime less hostile towards its neighbours.  This is all based on the assumption of course that the strategy of ‘engagement’ and not ‘containment’, which are both pillars of US Grand Strategy, will work in this case.

What international relations has taught us, though, is that it is much easier to make predictions about war, than it is for peace?, and Political Realism dating back to the time of Hobbes has taught us that we are prone to  live in a Hobbesian state of nature – particularly in the international sphere, where force has its own currency.  Let’s hope diplomacy prevails.