The Vagina Dialogues starts with a group of five women in a circle, dressed in black, humming in unison as the audience fills, gradually turning into a choral a cappella song about having bitten their tongues for so long: until now. What follows is a series of captivating monologues, dialogues, sketches and songs. All the while, it feels like a conversation with the audience and with each other; it is clear they are so bonded as performers and there is a strong feeling of sisterhood throughout the show. It is a piece of theatre that leaves you feeling warm and empowered, from the tragicomedy of singing along to songs drunk on wine leaving messages on a phone (alone, but yet a sense of togetherness through the familiarity of this shared experience), to the silly and fun nudity of a boob dance, and the more sombre recollection of sexual assault.  It features artists from different ethnic backgrounds and sexualities, sharing their differences in a message of solidarity. Coming towards the end of the fringe, this is a must-see show, and The Völvas clearly have a bright future ahead of them. 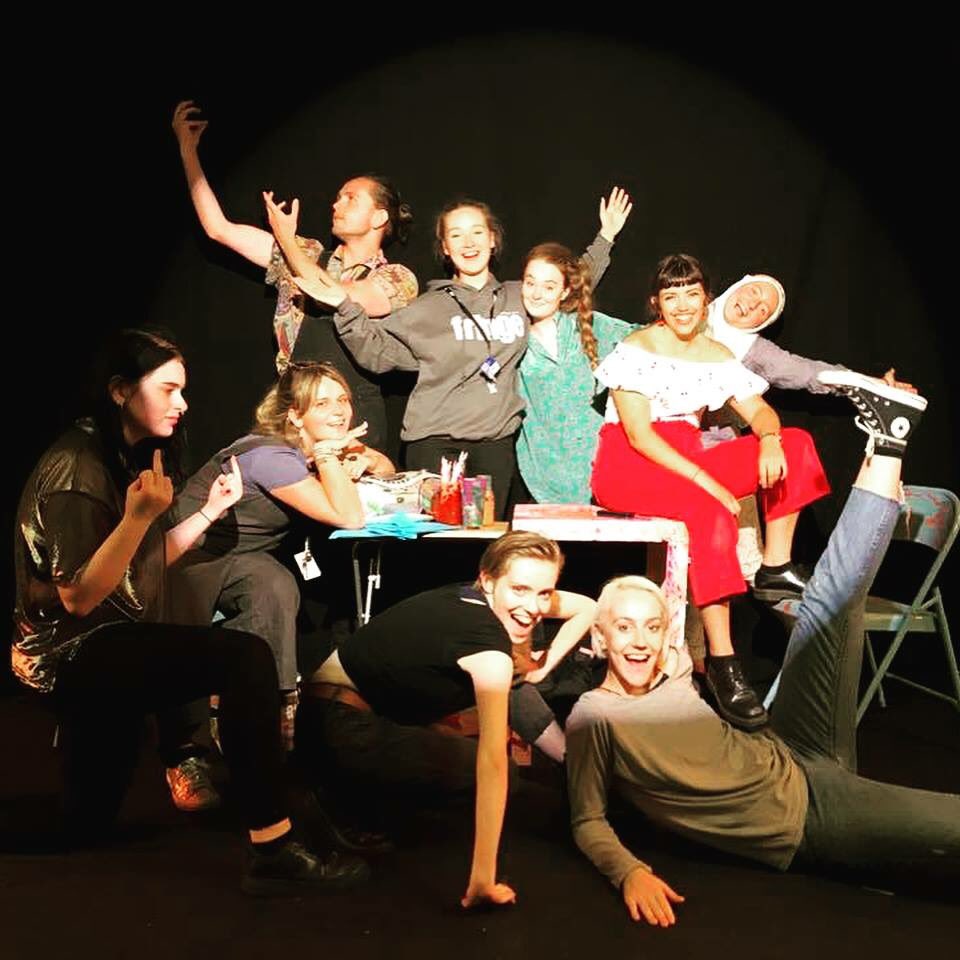 ( Cast and crew wrap photo for Side Orders via Antonym Theatre )

The multi-talented, poet, actor, and playwright Laurie Ogden follows the success her debut play, Twix, with Side Orders, from Antonym Theatre. It is a play about friendship, loneliness and making true connections, even when that means working through conflict. Through the characters of Amina (played by Malak Tammy Obaidi), Lily (Chloe Rolfe), and Bobbi (Harry Rigby), it explores these themes, and touches on issues of homophobia and Islamophobia in the context of family and friendship, presenting these conversations in a way that is realistic, yet also ultimately shows us the importance of making sure these conversations happen in a way that is honest and respectful. Whilst there is debate about who has the agency to write characters from different backgrounds, if done well it is equally important not to whitewash these stories. Only able to give my view as a white woman, I think Ogden has succeeded in writing a play that is hard-hitting and heartfelt, humorous in both the context of Amina’s desire to be a stand-up comedian, and in the play as whole. The actors skilfully executed their parts, and Ogden, a relatively recent graduate, has proved herself to have a bright future ahead.

An Evening with an Immigrant *****

Edinburgh can be a maze, and more than once I end up at the wrong Assembly, the wrong Pleasance, or the wrong Summerhall. This is what meant I missed my last scheduled review. But when I saw the 11pm showing of Inua Ellams’ An Evening with an Immigrant, I felt compelled to write about it here. Ellams threaded his poems into a narrative detailing his experiences of a childhood in Nigeria, and his time as an immigrant in both England and Ireland up to the present day. The production is slick, every word is placed perfectly, and as a fellow audience member noted, it is like we are there with him. The pictures he paints are so vivid, the emotions still so raw, that it is truly captivating to watch, with all the simplicity of Ellams seated on stage beside a suitcase, notebook in hand. As a poet who has known Ellams, it is incredible to hear what he has coped with all his life. When it comes to where his personal experience meets the political, it makes me wish that everyone could see this production. Wearing a t-shirt that states ‘Never forget to say thank you’, Ellams’ warm personality shines through, and without feminism being at the forefront, he presents what is it simply to be a good human, regales us of tales where he would play with his sisters, sewing Barbie doll clothes, and tells us of his admiration for both his parents equally. Ellams’ poetry is so beautiful to hear, and is equally so when it falls onto the page, but I leave wishing I could also take away, re-read and replay all the gorgeous parts in between.

(You can read a previous NR review of the show here, too.)

Featured image of Side Orders by: Antonym Theatre