Intense political climates such as Trump’s Administration and Brexit negotiations often mobilise visual, performative and conceptual responses among artists an. In an age of the closely documented and widely circulated, consumers are often inundated with updates and headlines, discussing a breadth of facts and fiction. Centrum’s group exhibition ‘Shades of Today: Picking Up the Pieces Post Truth’ not only addresses this either/or dynamic but looks to physical and online spaces that seek to keep specific narratives hidden from public consumption. The small interactive project space, through smell, image and sound, calls into question our own understanding of agency and accountability.

Curated by the Centrum team – Mareike Spendel, Kate Davis, Aurica Kastner, Evanthia Afstralou, and Natalie Weiland – the exhibition consists of six standout artists directly and excitingly dealing with the unreported and the unspoken. Martin John Callanan​’s ‘Wars During My Lifetime’ (1982-2013) is a prime example regarding tone and intent of the exhibition space. His small newspaper publication lists a number of wars across 30 years, without footnote or commentary. Although this piece could easily be disregarded in terms of it size and aesthetic appeal, arguably, its purpose is to point out media bias and media accountability when reporting incidents are often supported if not enforced by state and media groups. Its simple and accessible form allows readers to impart their own experience, or lack thereof with the content and as a result come to term with their own moral agency and consciousness.

quite often we desire the headline and not the story.

Callanan’s use of the printed format as opposed to online sources such as the internet or smartphones subtly addresses the shift in news consumption. Production of the broadsheet has depleted in favour of being first to report the headline, even if this means neglecting the truth. The simple nature of the work is a direct response to the simple ways in which wish to digest news; quite often we desire the headline and not the story. The publication in itself does prompt the questions, what do we desire from the media? Furthermore, are we willing to look beyond? In effect, Callanan’s piece is a nod towards the uncertainty or responsibility in so-called ‘honest journalism’, moreover, whether or not we as consumers actually desire the truth. 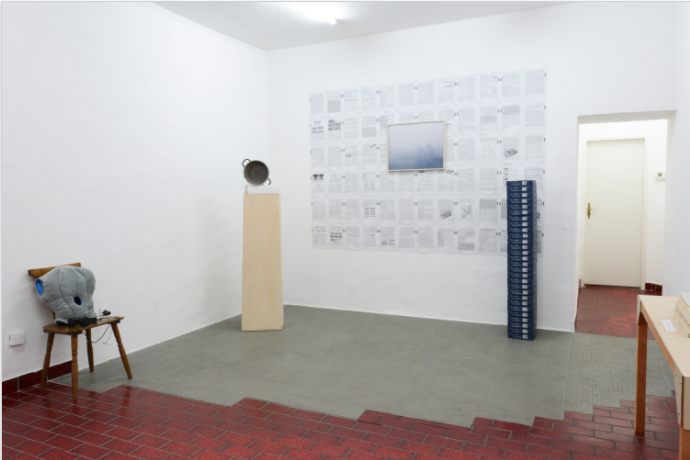 In a similar style of presentation, Benedikt Partenheimer​’s ‘Business As Usual’ (2016) looks into issues of clarity among bureaucratic powers regarding issues of pollution and climate change. Spanning across the space of a wall are printouts of the Intergovernmental Panel on Climate Change overseeing picture frame of smog. Stacked next to the backdrop are a pile of papers representing the extensive report and research gone into investigating climate change. In a sense, this work is a representation of fact versus fiction. Evidence of climate change surrounds us; unpredictable weather patterns, migrations and deaths of species, even unexpected natural disasters; both visually and physically we are victim to these changes.

Partenheimer’s work, much like Callanan’s piece focuses on addressing why we give precedence to bureaucratic officials when evidence of their findings are lived experiences for many communities

It seems only darkly funny, that a picture of smog covers the factual information gone into investigating climate change. Partenheimer’s work, much like Callanan’s piece focuses on addressing why we give precedence to bureaucratic officials when evidence of their findings are lived experiences for many communities. Much like the pieced backdrop, we as global citizens should not be clouded by jargon smog or ‘official findings’. Again, without providing, additional criticism, I would argue that both artists are asking us to reclaim our own investigative interests. In doing so, we put the destiny of our futures back into our own hands and into the hands of the generations to follow.

Continuing on with the theme of agency, Jae Jyung Kim’s piece extending from her ‘2+2=5’ (2016) project focuses on transparency versus privacy. Upon entry, viewers are greeted with three stereoscopes showing carefully collaged images of houses blurred on Google Street View. Each stereoscope is attached to a pulley system, next to which are three words pertaining to different states of time, being and remembering.

For most, Google is a one-stop-shop for answering all our inquisitive needs, often at the expense of our right to privacy. What’s most intriguing about Kim’s piece is the link between image, representation and memory. How much is constructed about our identity beyond our control? Furthermore, when we deny digital access to personal images, do we in some ways cease to exist? Living outside of Facebook, Youtube and Instagram almost seems like an alien concept in a society where’s it possible to stay connected and even make a living by simply being on the internet.

With that as a backdrop, refusing to contribute to the monetisation of images that aren’t self-curated is very much a radical idea. Of course, we rely on images to tell a story, but so often these images are manipulated or purposefully constructed to support biased narratives. Much like the smog of climate change, or the monstrosities of war, the truth is always evident somehow. Kim’s work so expertly challenges the idea that self-curation is beyond our control and moreover, asks that we take pride in who we are and what we choose to display or even hide.

As a whole, ‘Shades of Today’ is a poignant example of future possibilities that allows us to call out law enforcements, media spaces and biased narratives to uncover the simple, often messy truth of societies and communities today.  It means coming to terms with both sides of the coin and using that balance to move onwards and upwards.

One thought on “SHADES OF TODAY: PICKING UP THE PIECES POST-TRUTH”