There’s an old home-grown metaphor that runs in the Italian side of my family – which may have been acquired by my great-grandfather through his context and peers, I just have never heard it anywhere else – which goes as follows:

Italy is a watermelon. The thick, green skin on the outside is democracy, the Republic. The thin white layer that keeps everything inside together is the Democrazia Cristiana (Christian Democracy, the centre party that governed Italy after WWII, and the ancestor of pretty much all centrist politicians since). The red pulp is the Socialist, Communist heart of the country. But the seed, the black seed from which it all grows – that’s Fascism.

most of all, Italy is an ignorant country

Being a Fascist himself, and a member of the Guardia di Finanza, my great-grandfather was particularly fond of that punchline, I’m told. By the time it reached me, though, I saw it as most people tend to see watermelon seeds: an annoyance, something that’s inevitable but you just navigate around them, spitting them out or swallowing them without real care. That was probably our mistake.

( Fascismo e Libertà – the ‘party’ that saw three of its members become councillors in recent elections in Northen Italy, via Corriere.it )

The point about ignorance, meant as lack of education, is perhaps the thorniest of issues, before we delve into the thicket of raised hand salutes and brutish violence. School is compulsory between the ages of 6 and 16, and guaranteed by law to be, for the most part, free. Obviously, paying attention is not guaranteed, and plenty of misgivings can also be had about the level and quality of the education itself – but the system is there. And yet, so many people leave school exactly once the minimum age is reached, or lacking a formation that allows them to be functional members of a democratic society. Why?

I find myself at a loss in trying to answer my own question, as so many of us have gone through the same system and came out at least aware of our socio-political context and history. But, much like the UK, Italy has a troubled relationship with its colonial, imperialist past, with its ‘benevolent racism’, if such a thing can exist. Politicians, from all sides of the headache-inducing spectrum of the Italian party system, often loudly proclaim how ‘Italians are not racists’, ‘Italy is not a racist country’. Former minister Cécile Kyenge would like to differ. Emmanuel Chidi Namdi might’ve had something to say, too.

In recent Italian news, two big laws have acted as catalysts for all toxic political forces to show themselves; neo-fascism has responded loudly, as moderate, centrist, watered-down leftism scrambled to appease the electorate, rather than follow through. The first – the so-called Ius Soli or Ius Culturae proposals, first aired about in 2015, now postponed until after summer for no real reason – would allow all people born in Italy and who have attended at least five years of its education system to automatically become citizens. The most emblematic negative response from the xenophobic right is a banner by neo-fascist group Forza Nuova, claiming that ‘one has to be born Italian, not become one’ (see image). 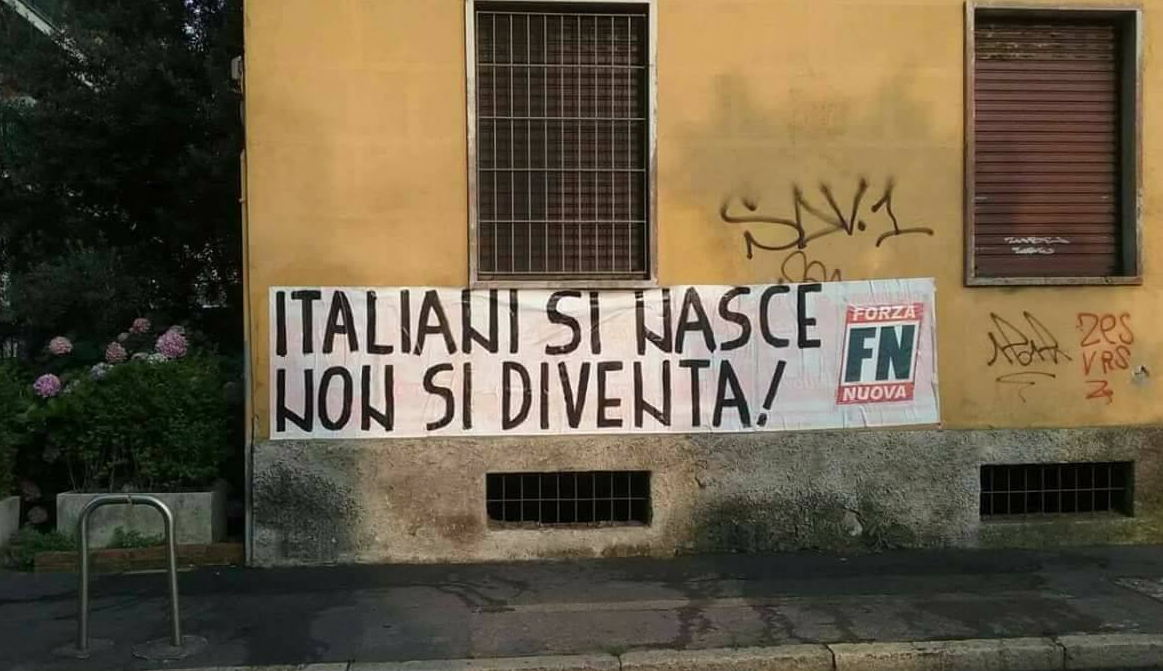 ( Forza Nuova banner in Milan, via I Sentinelli di Milano )

The sad, sad irony is entirely lost on them. The whole point of the law is to recognise those who have been born in Italy, and have lived here pretty much all their life, regardless of heritage or parents’ nationality. These 800+ thousand underage,150+ thousand adult Italians in all but legal status, are currently citizens of nothing – but fascists don’t care. They see rights given to others as a threat to the ones they already have, the same old story.

The second catalyst is a proposal that would heighten the criminal status of fascist propaganda. After a series of electoral coalitions sporting fascist symbols winning seats, and incidents such as restaurants and beaches decorated in full black regalia denying service to anyone seen as ‘disturbing the peace’, Emanuele Fiano offered an addition to the existing 1952 and 1993 laws banning ‘Fascist apology’, associations, and incitement. Clearly a healthy reminder was needed. Of course, everyone is against it, because free speech.

In recent Italian news, two big laws have acted as catalysts for all toxic political forces to show themselves

The sudden visibility of this resurgence (it’s been happening for years, all across the world) finds its roots, as I say above, in ignorance. These virulent ideologies are a fundamentally stupid view of the world, and of the countries that host them. Like Mussolini’s machine believed that Italy was only great when the Roman Empire was all the rage, today’s fascists believe that his was the Italy that was truly great – they’re still buying what he was selling, and I can understand why.

On an international level, Italy is worth nothing. There has been nothing of actual value, nothing for anyone of my generation or the one before mine to be proud of, as a collective. People feel abandoned by the EU through the migration ‘crises’, their governments through natural disasters and scandals, emboldened by the successes of Putin, Trump, Erdoğan and Orbán, stoked by the likes of Grillo and Salvini. Where else can pride in one’s country, that old toxic chestnut, find a nest, if not in the promise of Making Italy Great Again (Like When HE Was Here)? And how do we use education as a tool, rather than a weapon, to show them what reality actually looks like?

I have no answers. I only have two follow-ups to the watermelon metaphor. There are two approaches to the new fascist rising, here, in Italy: spit the seeds out, avoid them, pretend they’re just a nuisance and maybe the next something will be seedless. Or, we can swallow them, ingest them, digest what their fears and horrors might be, and assimilate them. What will be left, all the toxicity impregnating these scared and scary little seedlings that we can’t process, we’ll just have to flush once they come back out the other side.