When I went to Cádiz, I had planned to do little else but lay on its beaches, swim, and eat good food. Yet, I still wanted to explore the area to see what else it had to offer, and it was on a walk to the park that I stumbled upon some of the city’s fine art exhibitions.

By the coastline, I walked into the Baluarte de Santa Catalina y Castillo, a castle with a chapel, and great sea views, where various buildings within the grounds are now used as exhibition spaces. This 17th century fortress has a star-shaped floor-plan, and was historically a military prison. The first building was filled with paintings that were abstract to some degree, with parts that were more defined and identifiable as trees, leaves, or water, and parts that almost seemed photographic, but appeared to be blurred. They evoked not only the natural world, but a kind of stillness, and a feeling that you were submerged under water or deep in a forest.

it is the work in exhibitions such as this that allows the artist the time and space to speak, to express themselves without restriction.

A second building housed an exhibition titled ‘Abisal’ by Lucía Paniagua. The underwater feeling continued as portraits of women were depicted in blue washes, with fish and plant life. They were digital paintings, but they felt almost like watercolours or inks, mixed with fine pen or pencil lines. Looking further into her work, it was revealed that these were the exact materials she works with, using digital techniques to create her own unique style.

Whilst Paniagua also does illustration work for large corporate companies, the ethics of doing so is a common problem for artists, and working in such a competitive and difficult industry, to have such commissions (from e.g. Primark, Nestlé, McDonald’s) can make the difference as to whether one is able to survive. However, it is the work in exhibitions such as this that allows the artist the time and space to speak, to express themselves without restriction.

This is why arts funding is so important, with the government providing this and many other gallery spaces free for the public not only supports the artists on display, but also means it is fully accessible to everyone. In yet another building, the exhibition ‘Un Metro Cuadrado’ by Gloria Garrastazul presented a series of illustrations alongside poems, which were printed directly onto the wall in red. The pictures themselves were like poster advertisements, combining pictures graphics, and typography.

The exhibition acts as a tribute to the double Vainica musical duo, exploring themes of feminism and protecting the environment. Garrastazul herself comments that ‘with Gloria Van Aerssen I felt the farewell of two women who in the 70s talked about patriarchy, animal defense and real estate speculation in Spain through their themes. This exhibition is dedicated to Carmen Santonja and Gloria Van Aerssen (‘A Vainica Doble’). By their way of being as artists and as women. Thank you.’ This highlights and reminds us of the ways in which art can allow us to express what is important to us both politically, and personally, and how the two interconnect.

After a stroll through the park, I found another gallery called ECCO: Espacio de Cultura Contemporánea showing an exhibition called ‘Reciclar Arte’. Here was a courtyard, and upstairs exhibition spaces, including a chill-out area with welcoming beanbags, much needed in the Andalusian heat. Ana Torralaba Loyo was one of my favourite artists exhibiting work here, her paintings containing a surrealist element, with one piece – ‘Bañistas’ – depicting women swimming out of a bottle and into a small pool. Her work has a sense of humour, but could also be seen as alluding to women’s liberation, the costumes also referencing an earlier period in the twentieth century, and with all women being white, there are various ways this piece could be interpreted in terms of the limitations of the feminist movement throughout history.

‘Donde viven las vacas’ (‘Where the cows live’), shows gigantic milk cartons on a field, with anachronistic monochrome people stuck around them, like a collage. As well as a commentary on the role of cows and human consumption, what is also interesting about this piece is the use of language. Although some of the text on the milk cartons is in Spanish, there’s also a few translations of the word ‘milk’, and an overall dominance of the English language. Rather than making a critical point about language, this could even be a deliberate move by the artist to make the piece more international, from a commercial standpoint. 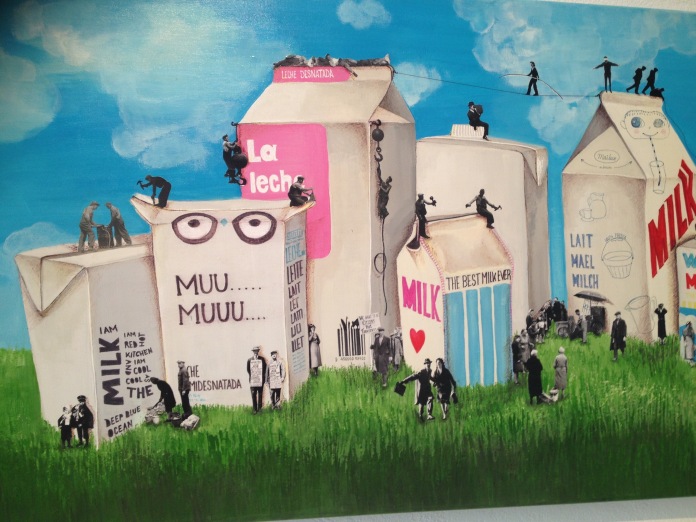 There was a range of paintings, mixed media pieces, and sculptural work. Another piece I liked, perhaps missing the comforts of cups of tea back in England, was by Mirvia Aranda Marín. A spiral of dyed multicoloured tea bags hung from string like a wind-chime. Titled ‘La memoría de las pequeñas cosas’ (‘Memory of the small things’) was beautiful to look at, and presented the idea of small things making up the part of a bigger picture.

Overall, the artwork accessible in the city made the trip extra special, and showed that not only are the arts are valued in this part of Spain, but that political discourse is encouraged. Here I have focused on my favourite pieces, but if you visit yourself you will undoubtedly see a multitude of different artistic expressions.

All images by Carmina Masoliver