Finding the right home for his pictures was a feature of Larry Sultan’s early career. Museums and galleries dismissed his satirical images—which played out an ironic commentary on modern American life—and found themselves on billboards scattered across America instead. Striking and immediate, perhaps they made more of an impact outside gallery walls.

Now Sultan’s photographs can be viewed in galleries including the Solomon Guggenheim Museum and SFMOMA, where his collection Here and Home is on view until July 23rd.

Born in 1946, Sultan grew up in the San Fernando Valley in California on the outskirts of LA. A part of America defined by the huge amounts of money to be made, its relatively high standard of living (if you are white) and its proximity to Mexico. Here and Home features aspects of Californian life that are intriguing and otherwise private: ‘Homeland’ is a series of staged scenes of immigrant communities going about their daily living—a group of men watching baseball practice from a batting cage; a troupe of friends passing through a field on their way to a potluck evening. There is something so intimate about the plates of food that they carry, the way one man’s fingers clutch the chainmail fence, it makes you want to look away.

Yet the desire to stare into the photographs in ‘Pictures from Home’—scenes which would, and perhaps should, otherwise remain private—is almost overwhelming. From 1983-92 Sultan returned home to his parents’ house in Palm Springs—a location where  rich, retired Americans  can swing golf clubs and enjoy the good life. He made a prolific archive of his parents’ lives together as they aged. Through a mesh window, he depicts his mother basting a turkey for Thanksgiving (an image his father complained of being too domestic—mumsy); his father sits on the edge of the bed fixing his cufflinks (again, his father complained that it told a story which simply wasn’t true—that it made him look wistful for the career he once had).

One of the most striking photographs called My Mother Posing for Me shows his mother leaning against the lime green wall of the living room looking demure with a hint of glam in her lavender silk shirt, a small sad smile in hot-pink lipstick crosses her face. Her husband sits in chair with his back to the camera watching a baseball game on the TV. In almost all of the photographs, Sultan’s father is engaged in some kind of leisure or sports activity, while his mother looks on or is preparing some meal. The disconnect between the two—the gulf in the fulfilment of their respective lives—is sudden and distinct. Yet we cannot help but look and look into them. 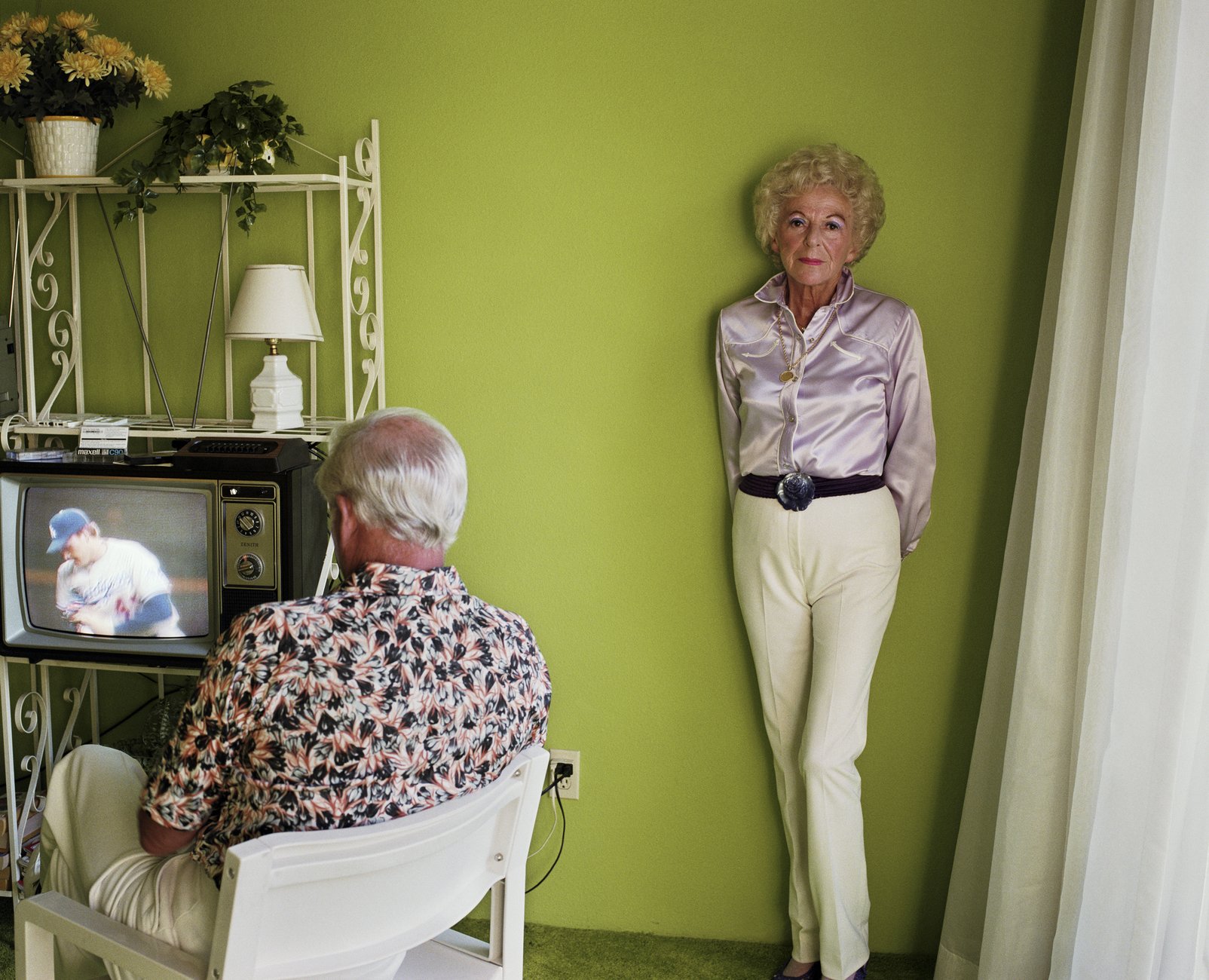 Family is a disarmingly easy subject to photograph, and the camera is adept at capturing longstanding and complex emotional histories in just the flicker of expressions. “I felt that family was one of the most complicated and unnerving institutions,” Sultan says, “and yet it’s the last institution that anyone believes in. We don’t believe in the government, we don’t believe in the church, certainly we don’t believe in the bank.” Other people’s family dynamics are always rich sources for curiosity and inquisition. They hold mirrors up to our own.

Photographed scenes from other people’s homes are taken to a new and intriguing level in ‘The Valley’—a series of photographs of  empty suburban LA homes in which porn film crews used. They are photos taken ‘between action’: an actress sits in her underwear on the edge of the bed beneath rumpled sheets betraying a grubby mattress. She looks sideways with boredom into the lens. In Boxers another woman has a man’s shirt thrown on over her dress and bares one golden leg, while a trio of boxer dogs sniff the ground at her feet as  she looks distractedly off camera. The adult film industry, which is centred in LA’s San Fernando Valley just over the hills from Hollywood, is worth about $3.5-4 billion in sales, online subscriptions, cable charges and video-masturbation-booth revenues. It is worth more that mainstream American cinema, estimated at $2-2.5 billion.*

Sultan depicts everything but the best job; there is a mundanity about it that most people who work can relate to.

That the ‘stars’ of this massive industry spend most of their filming days lounging around other people’s kitchens in their underwear, is a truth gleefully and quietly betrayed by Sultan with his camera. Unlike the ‘Homeland’ and his ‘Pictures from Home’ series, he did not seek out these  settings, but was asked to take photos for a magazine series called ‘Best Jobs Ever’. Sultan depicts everything but the best job; there is a mundanity about it that most people who work can relate to.

Visitors and observers of Sultan’s work who walk the hushed, clean walls of SFMOMA, are by virtue of being in the gallery able to enjoy a sense of cultural kudos. But through this carefully curated selection, Sultan finds the voyeur in all of us.