Here’s something I never thought I’d say: I agree with Jo Johnson. A couple of weeks ago the Tory Universities Minister told university leaders and Vice Chancellors that they needed to “stop ratcheting up pay”. This was a reaction to the news that the VC at Southampton University has received a £125,000 pay rise in the space of 5 years.

This increase is orders of magnitude larger than those of most other jobs in higher education, even other VC roles. And sadly it will likely have an effect on every other university in the country, as many other VCs will have more than half an eye on this figure as a future goal. Whilst Johnson has quiet rightly pointed out that VCs’ pay is rising faster and higher than it realistically should, he ruled out actually doing anything about it, merely stating that “the government would keep a close eye on it.” Hardly a solution.

Although VCs play a significant (if ultimately unnecessary) role in the running of their university, they also have a duty to act responsibly when it comes to the pay they receive. This clearly hasn’t been the case in Southampton. According to a spokesperson, the VC’s pay increases are decided by a remuneration committee created out of the university’s governing council. Digging a little deeper reveals that the committee is made up of “The Chair of Council, The President and Vice-Chancellor, The Vice-Chair of Council, The Treasurer, and One lay member of Council”. Yes, the VC sits on the body that determines his own pay, in what can only be described as a farcical conflict of interest. 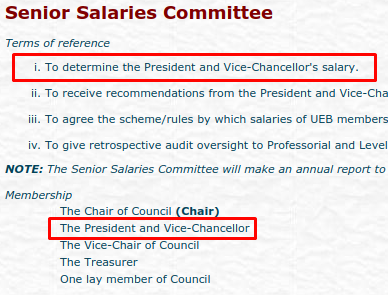 Compared to the pay that academic staff receive at Southampton, this inflated salary is completely out of sync. As revealed in the Times Higher Education VC Pay Survey, Southampton’s VC cost his university an unbelievable £697,000 in salary, pension and other expenses. The average wage of academic staff is £49,000, just 7 percent what is doled out to the single individual at the top.

This gap in pay is the biggest of any higher education institution in the UK, but others are not far off. It is highly indicative of the levels of inequality that exist in the sector. Most institutions do a little better, keeping the average wage of academic staff to no lower than 10% of their VCs’ salaries, in the vast majority of cases it is the VC and the senior management team who take the biggest cut of the wage budget.

Meanwhile, universities up and down the country are facing budget cuts, with departments and even whole campuses being shut down. Southampton is no different: it is cutting many jobs completely and slashing the wages of others, including overnight staff at halls of residence. For the VC to take the amount of money that he has whilst this is going on is worse than absurd. It’s offensive, cruel and completely obscene.

In this economic context, VC’s should be looking at setting an example for the rest of the country by taking cuts their own wages and expenses. When they fail to live up to this responsibility, as in Southampton, this choice needs to be taken out of the hands of those at the top and passed onto those who are willing tackle the shocking inequality that currently faces university staff. For any university worker to receive less that 10% of their top boss’ wage should be an embarrassment for that institution. Much as being on Jo Johnson’s side makes me shudder, it’s an important sign that Southampton, and other institutions like it, are being named and shamed for this despicable action.