Seeing the reaction to the snap general election result has been fascinating. For years, young people, particularly students, were criticised for not going out and voting. June 8th 2017 was the day we did. The result? A hung parliament that defied all expectations. In the lead up to the election, all the indications suggested that the Tories would win a landslide, even if the gap had begun to close in the final polls. In the end, this was far from how things played out, leaving Theresa May without a majority and forced to rely on the DUP to pass her key votes.

And now, young people, long maligned for being too apathetic and lazy to vote, have begun to be criticised for doing just that. One Conservative councillor has even argued that students should not be allowed to vote in their university constituency, the place where they spend the great majority of their time, because this is demographically unfair on other local residents. 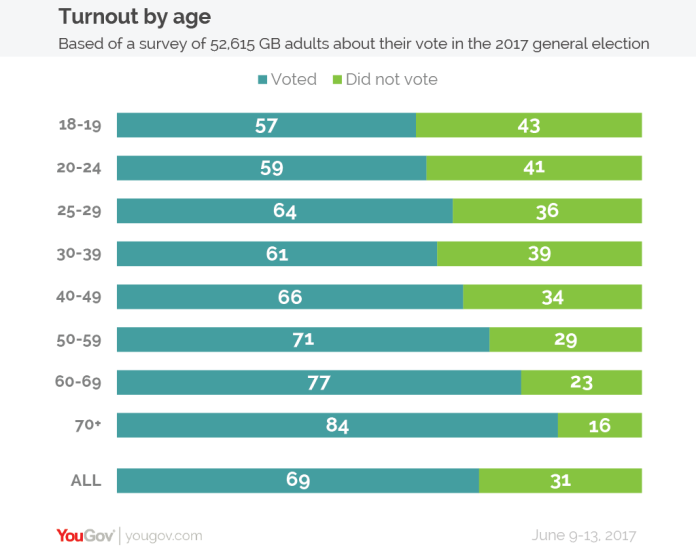 As Times Higher Education recognised in 2016 ‘Lecturers have long been accused of indoctrinating students with their liberal views, and the grade-obsessed students of today feel the same way’. This same idea, that students and young people are deluded or have been duped by those in positions of authority, has been bandied about time and time again. In many ways the thought that young people are left wing because we have been brainwashed is consistent with the discourses circling the Brexit vote and in particular Michael Gove’s now infamous comment that ‘people in this country have had enough of experts’. The popularity of these ideas suggests an anti-intellectual turn within British politics. The demonisation of education and alternative ideals is simply an attempt to protect the status quo, to keep Britain’s right-wing, Thatcherite orthodoxy in the ascendancy.

What we are seeing in British politics is not a generational divide, though that is how it may appear. We are simply seeing the manifestation of a class divide. Young people have different political views to other generations, because we live in a very different political and economic situation. Young people do not own property. We have been stacked with debt. For the first time in living memory, we are likely to be poorer than our parents. And yes, that is the reality for many university graduates as well. Young people voted the way we did because the reality we face and the ideals we hold are materially different from those of our parents. This vote was not a case of young people who have been ‘indoctrinated’ voting as their lecturers desire them to, nor was it a case of people lacking ‘life experience’ voting naively. This was a case of young people voting for the person they feel offers them the best opportunities in future and for the person they feel will do the best for this country, as their parents and grandparents did.

People are looking for something to blame for what, by any metric, must be seen as an utterly disastrous result for this country and everyone in it. Let’s be under no illusions – regardless of my stringent dislike for Theresa May and everything she stands for, we could not possibly be in a weaker position to enter what are the most important peacetime negotiations in the history of this country. But the real blame falls on the government that saddled each and every student with five figure debts, the government that restricted the ability of under-21’s to claim housing benefit. The blame falls on the fact that the minimum wage is set at different levels for different age ranges while rents and the cost of living are not, and the fact that the young people who will have to deal with the consequences of Brexit have been landed with it against their wishes.

Instead of blaming young people for daring to vote, or rather daring to vote ‘wrong’, we have to allow this election to open our eyes. Because, at this moment, under this government, young people are suffering. But now they have been shown the power that they have at the ballot box, and despite my personal reservations about him, in Jeremy Corbyn they have someone they can believe in. So don’t be so sure that this will just be a flash in the pan. Young people have spoken, and with their votes and voices they have called out the injustices perpetrated against them. Instead of pointing the finger of  blame, instead of calling for their voices to be silent once more, try listening.