I grew up in social housing. The estate I lived in was split between those who were lucky enough to own their house and those who relied upon housing associations to provide accommodation for them. The latter group, which includes my family, found that their houses were painted an obnoxiously bright yellow, for no other reason than to make those houses easily identifiable to the housing association and the rest of the neighbours. It was a big bright mark to ensure it was known that you lived in social housing.

This didn’t bother me when I was growing up, mainly due to my naivety about the wider situation my family was in. But every time I return home I’m reminded of how those who need the help social housing provides are treated as if they’re second class citizens.

This is why the Grenfell tower block fire resonates with me so much. Last year, the tower block underwent a multi-million pound refurb which, for reasons known only to the developers, included cosmetic changes to the outside of the building. Some block residents say that this was to appease the gentrified areas around the estate. Eyewitness reports and expert analysis suggest that the new cladding was partially to blame for the fire spreading through the tower at such a high rate, completely destroying it and the lives of those who used to call it home.

The safety and suitability of social housing is inherently political

Sadly, it seems that this tragedy could have easily been averted. The Grenfell residents’ group regularly complained about their building’s fire risks, including the recladding of the building and the lack of fire detectors within apartments, corridors and stairwells. Kensington and Chelsea Tenant Management Organisation, the landlord of the block ignored these concerns, apparently choosing to focus on priorities other than their residents’ safety during their expensive refurbishment.

Last year, Labour tabled an amendment to the Housing and Planning Act that would have ensured proper living standards for every home in the UK. However, as with any attempt to shore up the standards of housing in the UK in the last 7 years, the Tories chose to vote against the amendment and ended its progress through parliament. This reckless action means there is no legal obligation for private housing in the UK to be “fit for human habitation”, let alone safe. We’ve all experienced one or other of the current issues with housing arising up and down the country. Tory cuts to social housing come at a time when the private market alternatives are not only substandard but also horrifically over priced, making it nigh-impossible for people to break out of their reliance upon social housing as the Tories argue we must. If you don’t know why private housing is so bad, ask a student – they’ll have myriad stories of the dire housing situations they’ve faced. The safety of housing should never be left up to the whim of a landlord who feels like they can’t afford it. 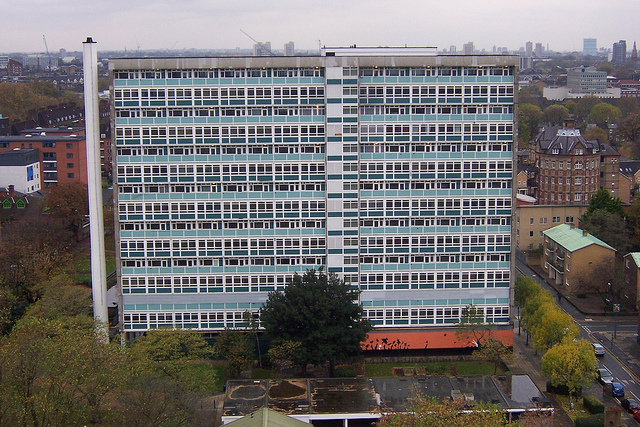 Lessons have not been learned from the 2009 fire at Lakanal house, the last major fire in London social housing, for which Southwark council were fined £570k under fire safety laws. Credit: sarflondondunc

We are living through a time of major gentrification projects in places in the UK that have previously had communities built around social housing. Grenfell residents were faced with this, as were many in the wider area around W11. The rapid, divisive movements of wealth that are taking place in London as well as other cities is tearing communities apart, re-establishing a class system based on housing situation. We cannot extricate the events of Tuesday night from these developments – freak accident though it was, the fire and its aftermath tell us a lot about what our society has come to think of social housing

Grenfell is the most painful example of what can happen when social housing is attacked by government and in our communities. In the face of these attacks, we must all fight back, to prevent more tragedy in the future.